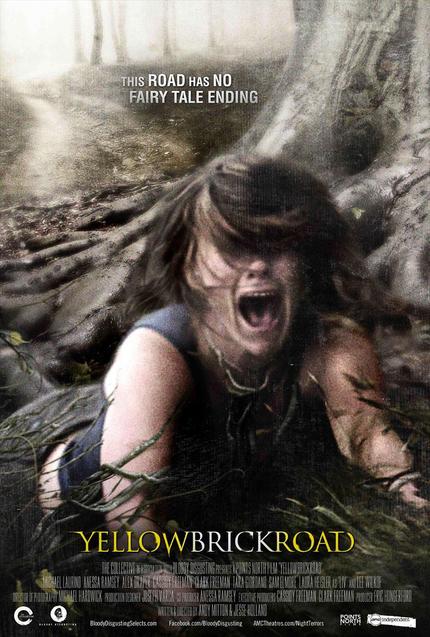 This little gem hits DVD tomorrow and we're giving away a signed poster. Below is the entry info and a short review from last May.

Time just doesn't permit me to write a very long piece here but I'll go so far as to say that this film does some difficult things well and any genre fan worth their salt should go out of their way to see it. Using the Wizard of Oz as a source for metaphors Yellow Brick Road tells the story of a group of documentary filmmakers attempting to solve a decades old mystery. In 1940 the entire town of Friar New Hampshire - 572 people, simply got up and walk off into the woods. No one knows why, and for years outsiders have been shunned by the few remaining townies. Spurred on by the promise of a best selling book a writer and his partner set off, crew in tow to walk the trail and look for clues. What follows is one of the more original horror films in recent memory.

Interesting use of audio helps create an ever growing sense of madness and what follows is a loose but often compelling meditation on cinema as escape, nature as antagonist, and man as spiritual seeker. This isn't a perfect film but I watched it in a group of five and all of us were very intrigued and would watch the film again. One can't help but being reminded of The Blair Witch Project (1999) and any number of other lost-in-the-woods films here but in this case that's a compliment. As a metaphor for our times lostness is the perfect metaphor.

Considerable unease is generated and directors Jesse Holland and Andy Mitton keep the gore at a minimum choosing instead to concentrate on his characters. Where the trail ends has as much to do with them as it does with trying to fulfill the conventions of the genre. This almost qualifies as a dark fantasy, or existential thriller but my guess is it's far too haunting to escape the horror moniker. I really wish I had more time to devote to this review but then again perhaps that's the highest compliment I can pay this strikingly creative nightmare.