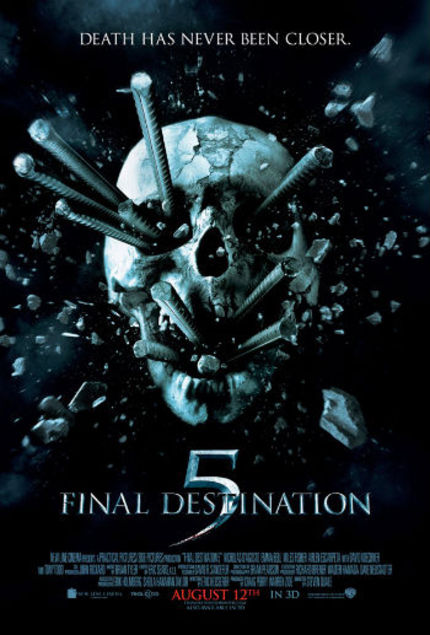 Final Destination 5 is a splatter version of a Chuck Jones cartoon, in which the Roadrunner is played by Death and interchangeable young people stand in for the unlucky Wile E. Coyote. The same could be said (and has been) about the first four films in the series. And the people behind the franchise will keep making the same cartoon over and over again ... because they're relatively cheap and young people love seeing other young people get splattered.

Having long ago left behind the dimension where logic, the physical laws of the universe, and all semblance of intelligence exist, the Final Destination franchise is free to spend all its time and most of its budget on ever more outlandish death sequences. The latest installment kicks things off with a spectacular gambit, set on a suspension bridge high over a river, where a fresh group of eight bodies await their ritual dismemberment. (At this point of the series, I'm not sure why the characters are even given names; it's far easier to simply call them by number: "38! Now killing number 38! 38!")

The lucky eight are sitting on a bus as it creeps through construction-slowed traffic, on their way to a business retreat for the paper-making plant where they all work. One of them has a premonitory vision that all of them will die horrible, gut-splitting deaths when the bridge collapses. (The sequence is truly amazing to watch, and stands alongside the opening of Final Destination 2 as the best in the series.) The young man, who I'll call #1, hustles them all off the bus, where they watch, horrified, as #1's premonition comes true.

Just so you know, here are the stereotypes characters and the actors who play them: #1 (Nicholas D'Agosto) is a sales person, but he's moonlighting as a cook at a French restaurant; #2 (Miles Fisher) is his good friend and boss, a high-strung sort; #3 (David Koechner) is the sales boss and token bald guy; #4 (Arlen Escarpeta) is the newly-appointed assistant plant manager and token black guy; #5 (Jacqueline MacInnes Wood) is the super cute rocker girl with glasses and a sassy attitude; #6 (P.J. Byrne) is the overweight IT guy with glasses; and #7 (Ellen Wroe) is #2's girlfriend, a college gymnast. Not included in the numbering system is #1's girlfriend (Emma Bell), who survived in #1's prophetic vision and supposedly is not in line to die.

Rounding out the cast, we have Courtney B. Vance as a police detective, the token guy who believes in logic above all else and is slow to realize that he's an authority figure in the fourth sequel to a horror movie; and Tony Todd as Tony Todd. (Don't worry, that's not a meta reference; he plays the individual who strikes fear into the hearts of all others.) That makes three African-Americans among the main cast of ten, which is pretty good representation, though that doesn't leave any room for Latinos. Never fear, however, for the movie is aware of being politically correct, to the point that one of the death sequences is set in an Asian massage parlor that is completely legitimate. (To add a dash of politically incorrect spice, though, #6 makes some tasteless jokes about Asians.)

With the majority of the demographic bases covered, Final Destination 5 gets down to the nitty gritty of killing off its cast in gruesome and explicit detail. The familiar formula is shaken up with a couple of new ingredients, but the basic flavor remains the same: intricate, Rube Goldberg-style accidents that are incredibly elaborate and designed to draw your eye away from the eventual cause of death, which is lingered upon with loving, morbid delight.

It would be offensive and disturbing if any of the deaths were grounded in reality. Nearly always, however, the deaths are relatively quick and always outlandishly gory. Some of the characters suffer, but they have already been established as two-dimensional cartoons, so their deaths are akin to animated characters getting erased from a page in a comic book. I'm reminded of James Bond asking Goldfinger, "Do you expect me to talk?" and Goldfinger answering: "No, Mr. Bond. I expect you to die." Same thing here; we expect these characters to die, and they don't disappoint.

None of the young leads stand out as Mary Elizabeth Winstead did in Final Destination 3, though Arlen Escarpeta (first rate in Brotherhood and also in the Friday the 13th remake) and Jacqueline MacInnes Wood (pictured below) caught my eye among the supporting cast for their lively presence.

The characters and dialogue are uninspired, so perhaps that's one area where the filmmakers could have paid greater attention to the work of director Chuck Jones and writer Michael Maltese: Sometimes it's better to keep your mouth shut and let your actions speak for themselves.

The death scenes in Final Destination 5 certainly speak for themselves as demented, ghoulish entertainment. It's all in good fun, right through the closing credits.

Final Destination 5 opens wide tomorrow in Canada, the U.S., Lithuania and Poland before expanding across the world in the coming weeks. Check local listings for theaters and showtimes.