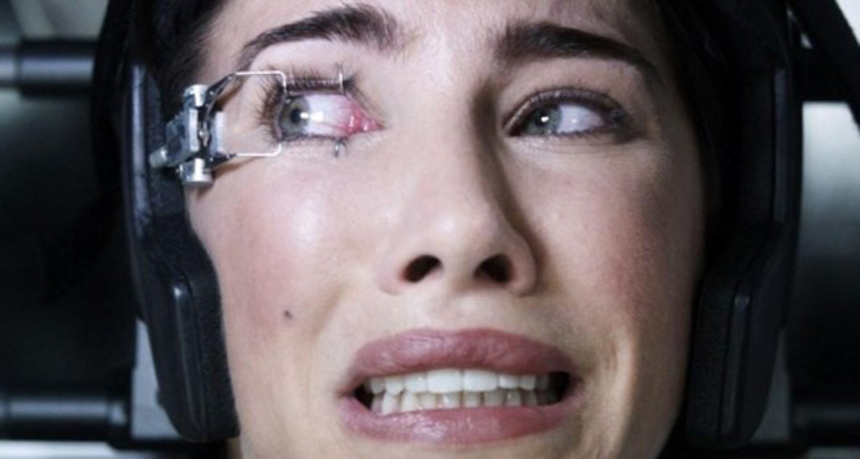 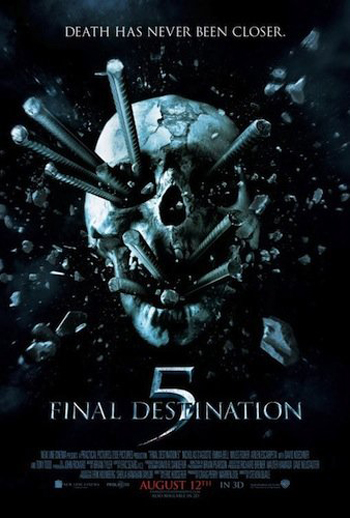 Final Destination 5 director Steven Quale has a bridge sequence that he really wants you to see in the latest installment of the fate-focused franchise. The unlikely series--which could otherwise be thought of a "A Series of Unfortunate Events That Happen to People Who Avoid Yet Another Unfortunate Event"--makes its IMAX debut in the second film from the franchise to be shot in 3D after 2009's The Final Destination. Quale should know a little something about the process of shooting in 3D--he worked alongside James Cameron as the second unit director on Avatar, and he co-directed the Aliens of the Deep documentary with Cameron back in 2005.

Our own Peter Martin had some kind words to say about Quale's direction of the film in his review. Earlier this week, I spoke with Quale about the particulars of getting 3D horror just right, and how to keep audiences coming back to the resurgent format.

ScreenAnarchy: So, Final Destination 5: what was the appeal for you? Why did you jump into this project?

Steven Quale: Well, I just finished doing Second Unit and Visual Effects for Avatar, and at the time, there was a lot of buzz for the 3D of Avatar, and I told my agent, "Let's look for projects out there that are doing 3D so I can really use my expertise and apply something to the film that other people may not have that certain unique take on it. So there were a number of different projects that I looked at, and when Final Destination 5 came up--I had seen the original Final Destination years ago and was a big fan of that first movie, so it intrigued me a lot to basically go into the franchise and, what I would call steer it back onto course back to what I think it should be to make it a fun, scary movie at the same time that would appeal to what the fans liked. So, with that, I was very intrigued by it.

One of the things I could do to elevate the franchise [was] having the opening bridge sequence be this big, huge, spectacular destruction scene as opposed to just a stunt car crash kind of thing from some of the earlier Final Destinations. I could elevate it into a higher-end visual effect, and that challenge intrigued me--that, plus dealing with suspense of these types of movies.

It was actually the suspense that is more important to get right than just the shock and the horror of the actual kill. It's really leading suspense that gets the audience intrigued and into it all. All those challenges really intrigued me a lot.

ScreenAnarchy: You mentioned trying to get the franchise back to what it should be--what did you mean by that? What's the essence of a successful Final Destination film?

SQ: The ideal Final Destination movie for me [is] somewhere along the lines between the sensibilities of the first one with the seriousness and the attention to the characters and so forth, but a little bit of the levity that the second one had where you have some comedy elements and sort of break the ice and have fun with it. Because at the end of the day it's like a big roller coaster ride: people love to get scared, and they're relieved when they've managed to survive at the end. And they see all of these people dealing with death, and unfortunately getting their demise in these ways that lead to a surge of adrenaline, but at the same time [audiences] feel relieved when it wasn't them. So, I think that if you do that, then the audience is definitely going to be thrilled and enjoy the ride.

ScreenAnarchy: Speaking to the 3D element, how do you go about really taking advantage of the technology and giving the audience their money's worth without tripping all over the story?

SQ: Well, what I do, actually, is having worked in 3D for so many years--I mean, I started working on it in 2003 with the prototype camera system on Aliens of the Deep with Jim Cameron and we learned a lot about what not to do in 3D, and as the systems advanced, you kind of learn the aesthetics. I think it's often like a tool like lenses [where you use a] telephoto lenses and really wide-angle lenses and tell a completely different story based on those choices of lenses. And 3D can be the same. And I think the key is to make it organically integrated into the sequences, so when you do have the big 3D moment, there's a reason for it from a story standpoint, and it's not just a gimmick of a Ping-Pong ball flying right into the camera for no reason. It punctuates what's happening from a character standpoint, or a story standpoint, or just even a frightening standpoint because [of] the tension of something happening or the horror of some accident or what have you. 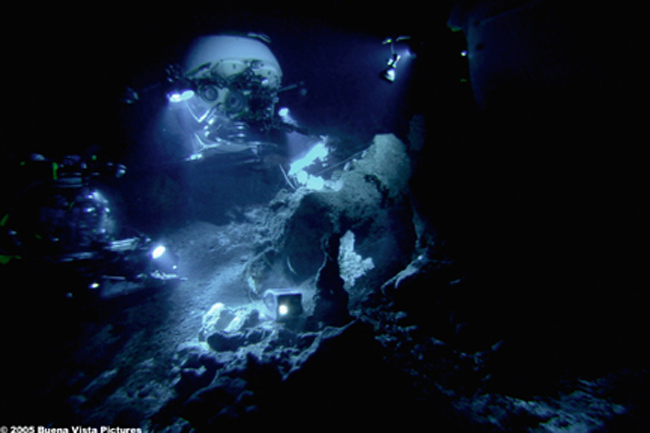 ScreenAnarchy: What is it exactly--and you've kind of touched on it a bit--what is it that keeps audiences engaged with 3D? There've been some drops in tickets sales for 3D movies--

SQ: Any new technology always follows a sort of sine wave pattern, where when it first comes out, it's this huge burst and everybody is all amazed that it's new and it's innovative and all that, so everybody jumps on the bandwagon. And then it dips down and it hits the trough where people have said "Okay, you know, the newness of it is over. I'm not going to see a movie just because it's in 3D. I'm going to see a movie because it's a good movie and the 3D enhances it, and then that trough rises back up to some normal curve where it stabilizes.

And I think right now, a lot of people in the media have jumped on the bandwagon thinking that 3D is [facing] its demise and [it's] doing much worse than it has in the past. I think that was just unrealistic expectations of everybody going in. And I think it'll even itself out to the point that it'll still be event movies, or horror movies, or certain genre-type movies that really benefit from the added benefit of 3D done right. And it's key to the filmmakers that they make sure that they do that and understand how to use the technology as opposed to [throwing] a 3D conversion on at the end of a normal movie and say, "Hey, here's our 3D. Go pay five bucks more for it." The audience is definitely going to react negatively to that if [filmmakers] continue on that path.

ScreenAnarchy: For you, what is the pitch for 3D? What can it add to a film?

SQ: I think for a horror movie it's the immersion when you're in that environment, and then it also allows moments where you can just be shocked. It's almost like a roller coaster, where you have that added element that you just don't get in a 2D version of that. And in all of the preview screenings we've done, the audiences have said that they would have preferred and gone out of their way to see 3D after they had seen it, because they said it was really effectively done.

So, I think the key is to make it organic into the film, and not at all gimmicky, but at the same time really [making] use of it. I think there are certain filmmakers who have done that, and there are others who just converted the films, and they haven't been as successful.

ScreenAnarchy: To your mind, who's doing 3D really, really well?

I think there are several filmmakers out there who have learned and are getting better at it, and do a fantastic job with 3D.

ScreenAnarchy: What's the difference in the scale and the scope of the production of something like Final Destination 5 and Avatar? 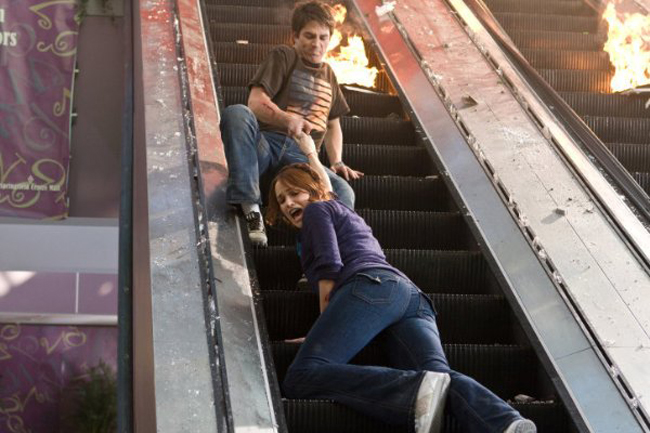 SQ: Interestingly--Avatar and Final Destination 5 are different films in the sense that Avatar was [set on] a foreign planet that had a whole universe that you had to create from scratch. So there's lots of green screen partial sets and very little live action [and] lots of motion capture. And Final Destination5 exists in the real world, and it has to be grounded in reality. So in some ways, it's more difficult to try to get things to integrate in a real world--like when you're trying to have a bridge collapse sequence and everybody knows what a bridge looks like.

So, it's a lot of fun, and I really enjoy that type of a challenge [to] try to create something that feels totally real but at the same time is horrific because you're 150 feet above the water on a bridge and it's starting to collapse. And yet, you have nowhere to go and what do you do? And being able to have that sequence be shot in a point of view of our main characters gives you more tension into what's happening and makes the audience feel like spectators watching this horrible thing. So in that respect, it's different because it's a horror movie that has Twilight Zone aspects of the really bizarre situations that are occurring. So it's much more [about] building the tension and the suspense and letting the camera sit and build up these things to get the audience aware of what all of the threats are and what's going on so they'll try to figure out how this person is going to end up getting killed because they have this premonition and they know that eventually, everybody's going to try to cheat Death, but Death is after them.

ScreenAnarchy: And what are you up to next?

SQ: Well, actually, right now I'm just concentrating on seeing the film with an audience. Because it was fantastic to see preview screenings with the audience and I can't wait to be in the theater opening night to see what everybody's reacting to. But I have a number of other projects in various stages of development. Right now, this week, I'm just concentrating on FD 5.

Here's the thing: the fans that really like Final Destination, they should seek out the IMAX version of it. This is the first time that I know of that any major horror film has been enhanced and blown up to the IMAX format, and I just saw the finished version last week and it is amazing in IMAX--truly it is the way to see this film.

Final Destination 5 is in theaters today.