DFF: LIFE IN A DAY Review

The Disposable Film Festival (DFF) and YouTube co-presented a special free screening of Oscar®-winning film director Kevin Macdonald's Life In A Day at the Sundance Kabuki Theater, San Francisco on Wednesday, July 20, 2011. Life In A Day (produced by Ridley Scott) is a user-generated feature-length documentary, shot on a single day--July 24, 2010--that enlisted the global community to capture a moment of their lives on camera. Culled from over 80,000 videos to YouTube, the 90-minute feature pulls together deeply personal, powerful films from contributors from Australia to Zambia, from the heart of bustling major cities to the furthest and most remote reaches of the earth. Life In A Day director Kevin McDonald and editor Joe Walker were available for a Q&A following the screening.

DFF Executive Director Carlton Evans said, "It's an absolute pleasure and an honor to be a part of this event. The DFF hopes that more projects like this will bring everyday artists' work to the silver screen." Added festival Associate Director Katie Gillum, "Life In A Day is a testament to the capability and power of disposable filmmaking. The film could not have been produced without widespread access to disposable media like cell phones or digital cameras and without the freedom and flexibility they afford."

Twitch thanks Dominic Mercurio for offering his perspective on the event 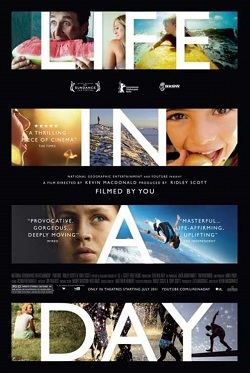 Are you alive? Then see this film. Many films explore the human experience, but Kevin Macdonald's Life In A Day dives into the deep end of humanity's essence. This ambitious project asked the YouTube community to upload videos of their day on July 24, 2010. The experiment resulted in over 4,500 hours of footage submitted from 140 countries around the world. The staggering amount of footage was funneled down into a 95-minute visual time capsule of one day in our lives as humans, documented by ourselves. The concept is old, the execution is undeniably innovative, and the result is astounding.

What makes the film stand out is its brilliant use of our society's penchant for over-sharing. Social media has reached a crescendo and YouTube has been the one stop shop to find just about anything you could ever want to see, captured on video. Life In A Day masterfully pieces together a candid look at ourselves. Tapping into the direct line that YouTube creates from a single person to the rest of the world, Macdonald has removed one of the stigmatas of documentary filmmaking--the film crew--thereby underscoring the frequent argument that documentaries cannot objectively see the truth as long as there are people behind the camera imposing their editorial perspective on a subject situation. By empowering everyday subjects with cameras, documentary's thin pretense of objectivity capsizes and a subjectified portrait of real people from around the world emerges.

The film itself is essentially a feature-length YouTube video, complete with visuals ranging from camera phone to professional cinematography, and ranging from a few seconds to a few minutes. Moments are sequentially experienced as the channel flips from one country to the next through editing whose pace resembles the average internet users online experience, cribbed as it is by internet attention deficit disorder. Some say the average attention span of an internet user is a mere three minutes, so congratulations on getting this far in this article.

Trying to describe the film to someone who has not yet seen it is a difficult task. Singling out individual clips that struck me as powerful and poignant probably won't comport with the clips that resonate with others, but the variety of clips dropping you in the middle of hundreds of countries and situations ensures that there is something in this film for everyone. The film's celebratory vibe throughout its duration keeps it consistently fascinating and entertaining. While there is no real narrative arc to speak of, I would say it still tells a story. It's the story that we each live every day, though this one particular day is thoroughly documented.

Commencing at midnight (relative of course to where in the world you are), Life In A Day observes morning routines of people around the globe, carries on through the day, and eventually returns to midnight. With that bare bones cyclic structure in place, Life In A Day finds plenty of wiggle room to explore common themes: touching on love, death, happiness, wonder, growing up, possessions, technology, fear, and hope. What becomes clear early on in the film is just how similar life can be around the world. It's easy to believe that an individual life is unlike anyone else's, but watching Life in a Day focuses less on difference and capitalizes on similarity. This isn't to demean our individual lives, but to bracket them within an omnipresent sense that "we are all one." The film solicits an identification with other people from other parts of the world.

The unique emotional punch of Life In A Day depends on what the viewer considers unique. By graciously providing a thrilling look at the world at a level only achievable through the tools of information in 2010, Life In A Day gives what the viewer, in turn, is willing to give. Allowing one's mind to wander through one's own experiences to explore how they relate to what the film provides can be a rewarding experience of connectivity.

If films are meant to be hyper-reality, it could be argued that Life In A Day is simply reality, unprecedented for being unadorned and honest. It's hard to shake the feeling of communitas that the film inspires. Undoubtedly, when the lights come up in the theater, you'll hope to catch the eyes of fellow audience members to determine whether or not they feel the same.

More about Life In A Day