BATTLE BEYOND THE STARS Blu-ray Review 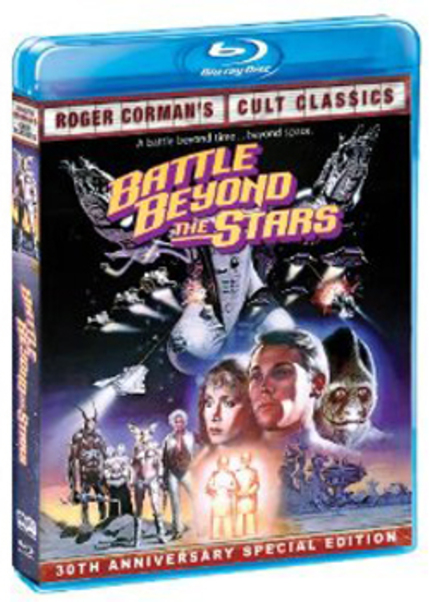 Shad (Richard Thomas) must scour the cosmos to recruit mercenaries from different planets and cultures in order to save his peaceful home planet from the threat of the evil tyrant Sador (John Saxon), who's bent on dominating and enslaving the entire universe. Joining this magnificant seven of mercenaries are the deadly Gelt (Robert Vaughn), carefree Cowboy (George Peppard) and the sexy Valkyrie Saint-Exmin (Sybil Danning).

If you can't enjoy Battle Beyond the Stars, you might as well stop watching movies.

Jimmy Murakami's Star Wars-sploitation film is 104 minutes of goofy fun aboard a ship bound for glory.  Roger Corman's Seven Samurai in space idea gets going right away and never lets up, the action is fast paced, the humor plentiful, and the effects are quite special.  While this was Corman's most expensive production to date, the film certainly falls far short of the space opera on which it was patterned.  What the film lacks in polish, it more than makes up for in fun.

Battle Beyond the Stars is a very self-aware film.  Rather than trying to compete directly with the big boys, Corman's crew decided to play the hand they were dealt.  As such, the film doesn't rely on its FX to carry the story, they work as accent features to the briskly moving storyline. The film is filled with plenty of goofy humor, everything from the androids at the Hephaestus space station, to Shad's HAL 9000-styled on board computer, to the strangely contemporary demeanor of various and sundry Alien races are designed to give the audience the entertainment it came for.  Where Star Wars was a space opera, Battle Beyond the Stars was space vaudeville, and proud of it.

This film had a million hands on it, and some of them are very well known, including the most famous Corman grad in this crew, James Cameron, as art director.  Another incredible talent on this film was screenwriter John Sayles, who went on to write and direct films such as Lone Star, Eight Men Out, and Matewan.  Corman's production house was probably the most successful film school ever, in terms of the phenomenal talents it churned out over the years, and Battle Beyond the Stars is another testament to that wonderful hit factory!

In a reasonable world, Battle Beyond the Stars would have no business looking this good on Blu-ray.  Thankfully, Shout! Factory doesn't live in a reasonable world, and they've been given license to do HD transfers of some really fantastic schlock.  Battle Beyond the Stars looks outrageously good.  The movie's appearance is very filmlike, and the image is rich in detail and bursting with color.  James Cameron's art direction really benefits from the image upgrade, as do the special effects.  The film isn't without its minor imperfections, speckles and scratches appear intermittently and disappear quickly, but for a film with these resources and of this vintage, it is a spectacular disc.  The sound also benefits, though less so, if only because the source material may have been in rougher shape.  Shout!'s DTS-HD 5.1 audio track is buoyant, with dialogue pretty darned clear, and the occasional directional effect in tact.  A more than adequate job for this film.

Shout! Factory have included a number of newly produced bonus features for Battle Beyond the Stars, all of which are worth checking out.  First up is the new The Man Who Would Be Shad featurette with star Richard Thomas.  Thomas is engaging and and remembers the project fondly, and his perspective is fun to see.  Next up on the new features front is Space Opera on a Shoestring, a featurette with several crew members regaling us with stories of trying to accomplish what seemed impossible on the slimmest of budgets.  They succeeded mightily, and of that they should be proud.

In addition to those new features, Shout! brings over two commentaries from previous editions, one with Corman and Sayles, and a second with production manager Gale Hurd, both are informative, and it is fun to listen to Corman talk about everything.  Rounding out the extras is are a trailer and some TV and radio spots.

Shout! Factory prove their commitment once again to preserving Roger Corman's distinct legacy for future generations with this comprehensive edition of Battle Beyond the Stars.  Highly recommended!

Shout! Factory presents Battle Beyond the Stars on Region A locked Blu-ray

Battle Beyond the Stars

Order Battle Beyond the Stars Blu-ray at Amazon

More about Battle Beyond the Stars