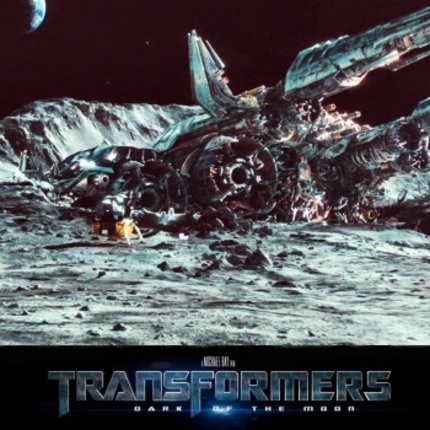 By sheer force of luck I got a free ticket last week to a 3D-IMAX screening of "Transformers: Dark of the Moon". That screening happened yesterday and seldom have my friends and I been so unified in what we thought about a film. Mind you, we had already seen "Transformers" and "Transformers: Revenge of the Fallen" so we were sort-of expecting what we got to see: huge robots kicking the crap out of each other while things in the background explode, whether or not supported by a (possibly lame) story.

Sam Witwicky is frustrated and annoyed. Despite having saved the world twice over he is ignored and because everything he did has been declared secret by the Government, he has to look for a job like everyone else while his Autobot friends are doing important military missions across the globe.

During such a mission Optimus Prime, leader of the Autobots, stumbles upon evidence of an old NASA secret: there is a derelict Autobot spaceship on the moon with a hugely dangerous cargo. When the Autobots visit the wreck, it starts a plan of their arch-enemies the Decepticons. A plan so audacious, so awesome, so epic... that they never proceeded with it in the previous films, not even when they were winning!

Sam is the first to smell a rat but is not believed by the authorities. Working through his own network of new and old friends, will he be in time to save the world AND his hot new girlfriend?

Oof. Where to start. Let's start with the 3D so I can say something nice. The 3D in "Transformers: Dark of the Moon" is cool, no question about it. Amongst so many films which have been "upgraded" from 2D to 3D, we finally have one which is the REAL deal and when seen in a proper 3D IMAX the video is spectacular. And to be able to apply 3D properly, indeed the editing is slightly less frantic than in the previous two films so that is a BIG bonus.

And for the first one-and-a-half hours I kept being pleasantly surprised by what I saw. Yes, there were cringe-worthy moments, but not too many. For the first time in a (real-life) Transformers film I was intrigued by the proceedings. A few minutes into the film, when the moon landings were on screen, I thought wow. Very nice, very cool, and for someone who remembers watching the REAL thing on a black-and-white television, very much fun to watch, especially in a kick-ass cinema. Even Rosie Huntington-Whiteley turned out to be better than expected, having not just good looks but some actual on-screen charisma going for her. Well, at least more than what the script demands (and despite often having more paint on her face than the Mona Lisa). 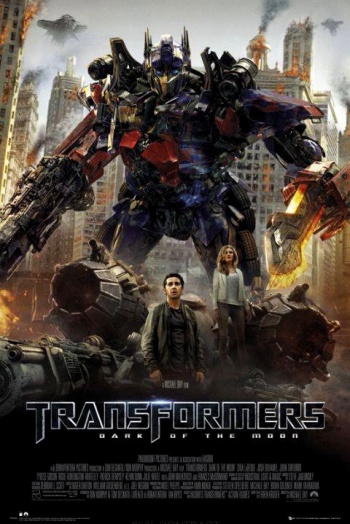 Then... boom! Just after one of the best action sequences in the film, it all implodes. A few things happen in short succession that not only contradict what was told in the previous films, but even what we ourselves saw happen just a few minutes earlier.

As "Transformers: Dark of the Moon" rolls into its last hour, it destroys not only the city of Chicago, but any semblance of what made it fun so far. Oh sure, moments will impress. A desperate dive with squirrel suits through destroyed buildings gets the adrenaline going. Optimus Prime kicking ass in 3D looks good, apart from the times he does something monumentally stupid (there are a few).

And we see familiar things returning, making me relive headscratching moments from the previous films. A completely missing sense of continuity, people who appear to teleport from action-bit to action-bit, often in the wrong order.
Things like Optimus Prime executing a captured and incapacitated enemy by shooting him through the head. Apparently that is VERY evil when the Decepticons do it, yet our hero Optimus, our noble paragon of morality, he did that with the droid in Shanghai in "Revenge of the Fallen" and he's doing it again in a key moment here.

But that's all just nitpicking. What is most damning of all is that stupid stuff just happens without any reason for it. I'm willing to work for my suspension of disbelief when a plothole appears, or an inconsistency, when it results in a cool scene, a funny moment. I go to big cinemas like a 3D IMAX to see something that wows me, preferably something I've never seen before. If a film delivers on that I'm game. Even though I was fully aware of that film's mistakes I saw "Jurassic Park" four times in the cinema, two screenings of which were in 70 mm. Yet I never returned even once to "Jurassic Park: The Lost World" even though it had a far better dinosaur-to-minute ratio. What was new in that film could not conquer what was rotten with it.

While not quite as bad as "Jurassic Park: The Lost World", this third live-action Transformers film comes close. After some devastating lapses in storytelling we suddenly are in a city, with giant robots fighting. And all we get is a bloated version of the last 20 minutes from the first Transformers film. It was nice that the snake-scene from "D-War" was thrown in as well (with the snake replaced with a leftover robot from "Vexille"), and it's nice that Michael Bay likes the helicopter rescue from the first "Matrix" film, but I just felt damn empty at the end. Not tired, not nauseous, not full of hatred... just empty. For a while I had been watching a very cool movie, but then it was suddenly torn up and replaced by some weird remix.

Aw, man! Almost. Michael Bay almost made a good and awesome Transformers film which kicked ass and erased the weird taste of the earlier films. But he shoots himself in the foot repeatedly during the last hour, bringing the film down to the same level as "Revenge of the Fallen".
Tweet Post Submit