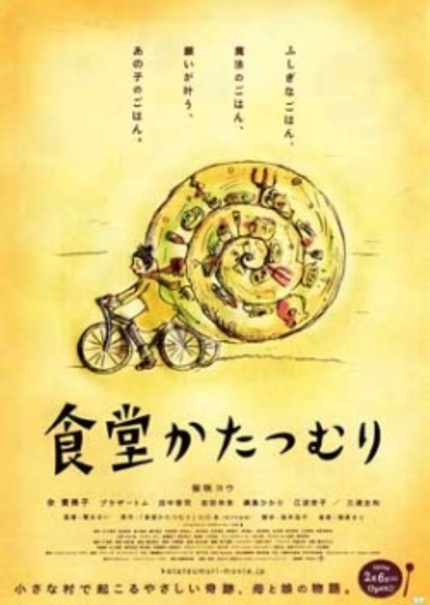 Even though female directors are on the rise in Japan, they often limit themselves to directing films within a rather strict frame of genres and themes. Mai Tominaga is a welcome exception and seems to feel more at ease amongst directors like Satoshi Miki and Katsuhito Ishii, staging a set of quirky characters within a colorful, manga-inspired universe. After Wool 100% Rinco's Restaurant is her second full-length feature, and I must say it turned out to be a real beauty.

Tominaga's style is no mere copy of her male companions though, she sets herself apart by introducing an underlying current of tragic emotions, one that actively conflicts with the bright and humorous overtones of the characters and events. That's where she draws her strength from, creating a rather unique niche that only knows distant relatives. At the same time, Tominaga seems to have a little trouble finding a dedicated audience because of her particular style. Her films aren't the easiest to recommend to other people, as you really need to appreciate the mix of the different elements featured in her films.

Rinco's Restaurant may be not as edgy or abstract compared to Wool 100%, it remains a film that should be approached with caution. It's easy to draw comparisons with films like Instant Numa or Taste of Tea (the film features a similar kind of gentle weirdness), but Tominaga's work isn't all about laughs and feel-good. Deep inside her characters are hurting, living a painful life, unable to put past traumas behind them.

Tominaga's latest film sees Rinco returning back home after she got cheated of all her possessions by her husband. The shock turns Rinco into a mute, not wanting to speak to anyone ever again, even to the people close to her. Rinco's mother is somewhat reluctant to take her back and shows little compassion for the girl. Things start to look up when Rinco starts a restaurant of her own, but the relationship with her mother remains difficult and loveless as they are wildly different people with little interest in each other's activities.

Visually Tominaga made good progress. It feels as if she is more in control over the visual elements she juggles around, molding them into a whole while retaining their unique, separate qualities. The film features some very nice animation sequences (not traditional anime mind), brightly-colored set pieces, lushly detailed locations, but also more subtle settings and less deliberately styled scenes. It's a small miracle that they work so well together, but looking back the style of the film still comes off as very singular and definite.

The soundtrack is a little easier on the ear this time around. I must admit that it flows a tad better with the more gentle atmosphere of this film, but at the same time I was also slightly disappointed. The soundtrack did seem to have lost its edge, something that really stood out when watching 100% Wool. It's rare to come across directors who dare to experiment so boldly with music, having lost that here seem like a missed opportunity. People who haven't seen Wool 100% won't notice this of course, but personally I prefer Tominaga's more demanding approach.

Acting performances are all-around strong, with Enami (Rinco) and Shida (Rinco's mom) carrying most of the weight of the film. They find a nice balance between the human and cartoonish aspects of their characters, continuously swaying between fun stereotypes and genuinely moving human beings. Secondary characters are a little less refined and are clearer stereotypes, but none of them feels out of place or intrusive.

While redemption lies right around the corner for most characters, there are still some tough pills to swallow when the films nears its climax. Rinco's Restaurant never becomes depressing or mean-spirited, but Tominaga keeps a consistent balance of light-hearted fun and heart-felt tragedy throughout the whole film. While I consider this a definite strong point, it also means that people who can't get a grip on Tominaga's unique mix of comedy and tragedy won't get many chances to find their way later on. If you're not enjoying yourself during the first 20 minutes, Rinco's Restaurant might prove to be a rather tiring experience.

One final word of warning: make sure you are either pretty well stuffed or you have quick access to food while watching this film. The "restaurant" bit of the title isn't merely there for show, the film features quite a few cooking scenes which are mouth-watering sublime. It's something in the way the Japanese think about food (think Kamome Diner) which turns their preparation of food into an almost sacred art. There is no shortage of people cooking in front of sun-lit windows, enjoying the sound and smells of steaming, sizzling pans in front of them, so beware.

It's hard to say which of Tominaga's films is better. Rinco's Restaurant is definitely more accomplished, illustrating Tominaga's growth as a director. But as is often the case, that same growth means she has lost some of her edge present in her first film, that little spark of uncaring experimentation that often leads to pure genius is just not as apparent here. That said, there is still plenty to enjoy and even more that sets Tominaga apart from her fellow directors. Rinco's Restaurant is an excellent film, which deserves an appreciative and caring audience.