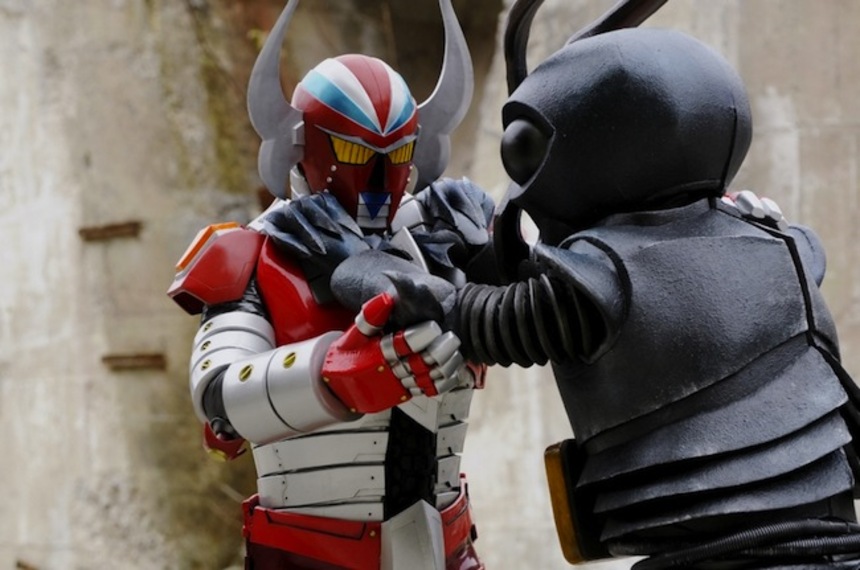 [Our thanks to Mark Popham for the following review.]

Sometime in the mid-nineties, when the VHS tape was king, "so bad it's good" became an aesthetic in it's own right. People began actively seeking out bad movies- cheeseball Japanese action movies, or monster flicks from the '50s with ridiculous special effects- and it wasn't long before people started making bad movies on purpose. If people thought that the ridiculous plot and effects of Troll 2 were laughable, the line of thought ran, how much more hilarious would a movie that was purposely cheesy and ridiculous be? The answer, in almost all cases, was not hilarious at all.

People would come up with a zany premise, write a couple of one-liners down, put on a costume and then just stand there, expecting the audience to do all the work. You'd get some friends together, pop in a tape and sit, in silence, completely mirthlessly watching these people glare into the camera while the director's best friend from middle school did a Bruce Campbell impression. Because what these filmmakers failed to realize is that kitschy humor is hard. You have to be engaged with something in order to laugh at it.

Karate-Robo Zaborgar is excellent. In fact, Karate-Robo Zaborgar is like some sort of Roarshachian ur-movie- it is the parody/homage kaiju movie that you've wanted to see every time you've ended up sitting through a bad one. Karate-Robo Zaborgar, based on a totally earnest children's show from the 1970s, follows a young karate expert and crime fighter, who- along with his ass-kicking, fist-launching robot brother Zaborgar- tries to keep Japan safe from the evil Dr. Akunomiya and his organization of crazed cyborgs, Sigma. Or at least it does for the first half, before jumping forward 25 years. Now the young crimefighter is a recently-fired chauffer with diabetes, who suddenly learns that his one-night stand with the enemy, Miss Borg- a relationship which ended with the deaths of both Miss Borg and Zaborgar- resulted in a pair of twins. Can he succeed over diabetes, unemployment, his evil son, his giant robot daughter AND Akunomiya?

The acting is suitably tongue in cheek, the dialogue perfect, the characters ridiculous- and when a closing credits crawl reveals that all of the laughable cyborgs, shoe cars, bulldog faced trucks and diarrhea robots are taken directly from the aforementioned children's program, it becomes something like sublime.