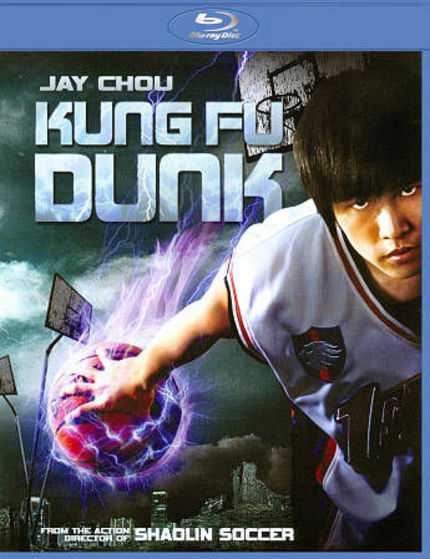 Sports and martial arts mix to limited effect in Kung Fu Dunk, in which Jay Chou plays a preternaturally gifted orphan who is recruited to play for a college basketball team. With Eric Tsang as his fast-hustling manager, Charlene Choi as a sweet girl whose brother is a hard-drinking star of the team, and Tony Ching Siu-Tung choreographing the action, there are sufficient elements in place to make an entertaining movie. But it never comes together in a satisfying manner.

When the film was released in Asia in 2008, Stefan reviewed it for ScreenAnarchy (see link below). He pointed out the flaws, but felt "the basketball stunts itself would still make this a decent movie with nifty basketball moves." For me, the story elements were utterly banal and the stunts didn't do enough to elevate the story. Director Kevin Chu Yen-Ping says in one of the extras that he's a huge fan of basketball, but, as a more casual viewer of the sport, there seems little advantage in being able to jump 30 or 40 feet in the air. It looks great, but kinda pointless.

The Blu-ray from Well Go USA looks wonderful, however, exceptionally clean and basically flawless, presenting richly-defined colors and inky blacks. Four audio tracks are included: the original Mandarin and dubbed English, in DD 2.0 and DD 5.1. The English subtitles are well-timed and easy to read.

The extras are all subtitled in English, presented in standard definition, and total about 43 minutes. Cast and crew interviews are broken down into individual segments: Jay Chou gets 12 minutes, Chen Bo-lin only 3 minutes, Charlene Choi runs 7 and 1/2 minutes, Eric Tsang 4 and 1/2 minutes, and director Kevin Chu talks for 5 1/2 minutes. The director admits that, before this project came up, he was guilty of making "run of the mill" movies: "I wasn't even interested." Good to know!

Behind the scenes footage is divided between "The Action" (7 minutes), "The Stunts" (4 minutes), and "Training with the Bus" (2 minutes). The footage doesn't provide any new insights, but confirms that Hong Kong cast and crew members work really hard for their money.

Finally, an English-subtitled trailer is included.

It's a good Blu-ray package for an ordinary movie. If you're still curious, or a Ching Siu-Tung completist, it's a low-priority rental at best.