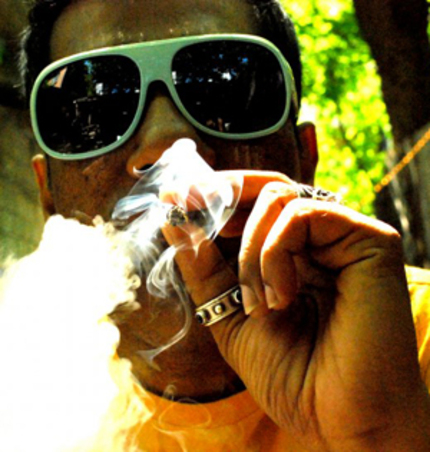 Two of the most progressive characters in Indian film today are teaming up to update the classic Bengali musical theatre piece, Tasher Desh.  Anurag Kashyap has confirmed that he will be co-producing a film version of Tasher Desh with Bengali enfant terrible Q to create a new experience altogether. The script for Q's Tasher Desh has been described as a cross between the classic Bengali work and The Rocky Horror Picture Show.  In less capable hands this could be disastrous, but Kashyap and Q both have pretty awesome track records, so I'm willing to roll the dice.

Anurag Kashyap has been at the forefront of Indian popular cinema, his most recent hit being Dev D.  Dev D was a modern retelling of another classic Bengali story, a novel called Devdas by Sarat Chandra Chattopadhyay.  Devdas had been made many times over the years, but Kashyap's film won praise for its candor and innovative modern setting.  He also directed That Girl in Yellow Boots, which just recently won distribution in the US through IndiePix.  As a producer he has also championed new filmmakers, most recently with Bejoy Nambiar's Shaitan which has won universal praise.  I've been trying to get a copy of Shaitan to review, but with no luck, it hasn't been shown in the US yet, and I'm anxious to see it.

Twitch has been a fan of Q since we premiered the trailer for his film, Gandu, in advance of its world premiere at SAIFF 2010 last fall.  Q is the latest in a long line of Bengali artists seeking to push audiences beyond their own limitations.  Gandu has just finished a tour of Europe which included screenings and concerts, as well as a festival appearance a SIFF which earned the film and its director awards.  This film will be Q's first feature that will have a real budget behind it, as Gandu was entirely self-financed and everyone worked for free.  I'm genuinely excited to see what he can do with a little bit of support.

Gandu was set to have its first public screening in India this Friday, but due to the tragic bombings in Mumbai, the event has been postponed.  However, I have had a long conversation with him and plan to give you the skinny on the travails of Gandu in India soon.

Those are all of the details so far available regarding Tasher Desh, I tried to get a quote from Q, but all he could offer at this point was, "I'm excited to be working on this project, it's going be awesome" and I prompted that.  Tasher Desh is still in the pre-production phase, but I'd expect it to start filming in the not too distant future, and you can bet ScreenAnarchy will be there every step of the way!  Look for a basic synopsis of the source material below:

Tasher Desh is one of Tagore's most famous dance operas, a unique genre he developed that was influenced by Western opera.

A Prince, tired of suffocating in his palace, goes in search of adventure. Accompanied by a far more conventional travelling companion, a Merchant, the mismatched pair get shipwrecked in the Land of Cards . Here the inhabitants are playing cards, well regulated and devoid of emotions. With the wild force of his personality, the Prince starts to effect change in the Cards and gradually their human qualities begin to emerge...