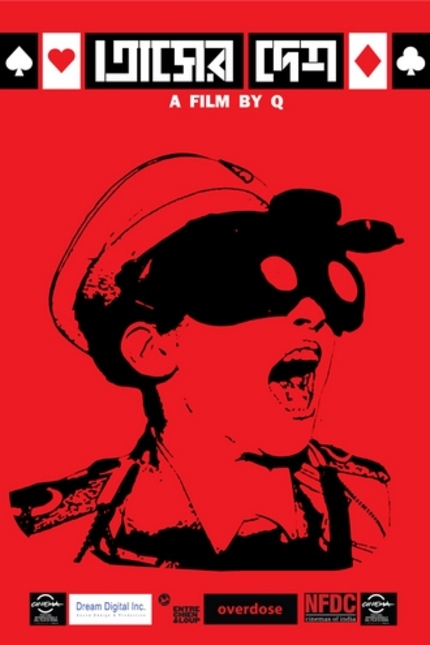 Bengali cinema's enfant terrible, Q, is not known for making films for the faint of heart or weak of mind. His latest film, an adaptation of a play from Nobel Prize winning Bengali author Rabindranath Tagore, is no exception. Tasher Desh may not be as sexually confrontational or vulgar as Q's breakout feature, Gandu, but it is nonetheless a piece of work to be contemplated as much as enjoyed by the more adventurous viewer.

Much like Gandu, Tasher Desh follows its own rhythm, abandoning the traditional three act structure and all rules of dialogue. Rather than telling us a story, Q is putting us through an experience. A beautifully shot, impeccably scored, and at times completely infuriating experience. If you can make it through the first twenty or thirty minutes of the film you're in for a treat, but I warn you, some people will be just as adverse to Q's non-linear storytelling style as they are to his occasionally avant-garde approach to everything he does.

Tasher Desh opens with a number of story threads being opened and left dangling all at the same time. The main thread of the film's first half involves a playwright attempting to find a performance of the titular story, a very well known play by Tagore, and finding nothing. Desperate for release, the playwright decides to stage his own to no avail. He (presumably) disappears into the text he desires and the film begins in earnest about an hour in. From there on out, it's pretty standard in terms of the time line, however, getting through the first hour will take an adventurous sort willing to go with Q's flow, even if it doesn't seem to make a whole lot of sense.

The linear narrative portion of the film, sort of like a fascist Alice in Wonderland crossed with Pier Paolo Pasolini's Theorem, is a wonderful and touching exploration of the power of unleashed emotion. A mysterious prince and his friend find themselves stranded in the emotionless Land of Cards. Individuality is a sin, emotion is punishable by law, and passion is completely foreign. However, when the prince and his compatriot begin to question the authority, the ranks begin to melt from within, creating a love story pulsing with pent up emotion, forbidden passions, and the ever-intoxicating threat of discovery.

The film is a challenging one, however, it is not without great rewards. Too artsy for the mainstream crowd, the film has yet to find a home in the west. PVR Cinemas in India bravely took to distributing Tasher Desh in its cinemas over the summer to relative critical success, even though it is clearly not the kind of film that would make any money. Such an oddball, unexploitable feature is unlikely to gain traction outside of the hardcore arethouse crowd, but it's well worth seeking out for fans of the avant-garde, fans of Tagore, and fans of having one's melting brain served up a plate by one of the most experimental films I've seen in a while.