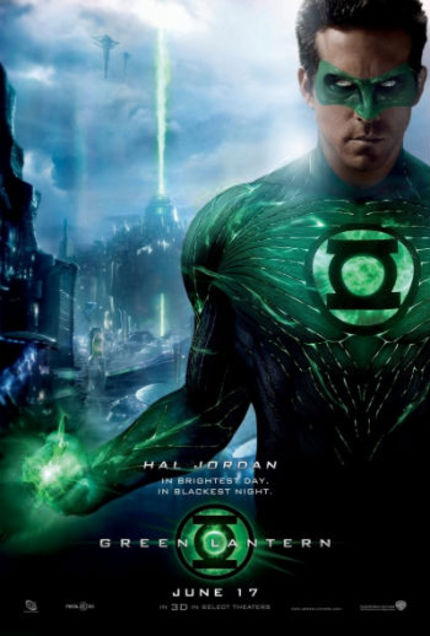 All the major superheroes have been claimed. The most popular ones -- the characters that will thrill young people but also hold some sway with the grown-ups -- have already had their movies and their sequels ... and are now getting started on their reboots. The long-standing battle for superhero supremacy has raged between Marvel and DC for years, and it seems that Marvel definitely has the upper hand: Spider-Man, Hulk, Iron Man, Captain America, Thor, The Avengers -- but only a fool would overlook the publishing company that has The Man of Steel and The Caped Crusader in its corner. So while DC plans its next permutation of Superman and puts the early touches on Part 3 of their stunningly popular Batman franchise ... they're digging into their own catalog for some Marvel-style cinematic heroics. The candidate this time around is Green Lantern, a character highly adored by comic books fans ... but not exactly the "mainstream crossover" type of hero.

First off, Green Lantern is quite a bit "weirder" than most superheroes. Perhaps best described as an interstellar police force, the Green Lanterns (there are 3,600 of 'em around the universe) can create physical objects through sheer force of will. You name it, they can build it with their nifty little ring. As long as the Lantern's will is strong -- and s/he is not a slave to fear -- these virtually immortal ass-kickers can do battle with just about any type of evil that comes oozing across the cosmos. Like the recent Marvel flick Thor, Green Lantern actually thrives when it spends its running time on the eye-popping planet of Oa, but unlike Thor, Green Lantern is pretty much flat, inert, and tiresome whenever we're stuck spending time on Earth. For a comic book flick that approaches the absurd with an admirable sense of sincerity, it sure does wallow in cliche, convention, and well-trod formula whenever the FX machines aren't switched on.

As this is an origin story (sigh), we're introduced to an affably cocky hotshot fighter pilot called Hal Jordan. After a seriously terrible day on the job, Hal comes into contact with a grievously injured Green Lantern who has crash-landed on Earth. Seems that this dying alien's magic ring has chosen Hal to become the next Lantern recruit, and then we're off and running with the (sigh) origin story that, let's face it, has already been covered ad nauseum in two dozen other superhero flicks: disapproving girlfriend, wide-eyed best pal, a metric ton of dreary daddy issues, some light comedy as magical powers lead to clumsy falls, a scheming politician, a sleazy scientist (also with daddy issues), and a whole lot of soul-searching on Hal Jordan's part as to how he can eliminate fear from his daily diet.

Beautiful to look at but dramatically inert, slightly amusing but overwhelmingly familiar, easy to follow but clumsily edited, the "Earthbound" stuff in Green Lantern is as simplistic and perfunctory as this stuff gets. (Rare is the film that can manage to make Tim Robbins boring, but Green Lantern does that.)

But when director Martin Campbell (and his team of a half-dozen screenwriters) takes hold of Green Lantern's weirdest material -- the monsters, the costume, the powers, the action scenes deep in outer space -- there are some pretty novel, compelling, and (wow!) unique things to behold. (The flick also has one of the coolest-looking "head baddies" ever committed to superhero cinema. It's really quite bad-ass.) It's at its wackiest moments that Green Lantern is most comfortable, strangely enough, but unfortunately more than half of the film is dedicated to the plot machinations on Earth, literally none of which you haven't seen before: a leading lady who is easy on the eyes but otherwise vacant; non-stop hand-wringing over basic insecurities and flat platitudes about disapproving daddies; generic story contortions about jealous rivals and greedy military men ... it's all here, folks, and it's all set to one of J.N. Howard's most ponderous and lifeless musical scores.

Green Lantern feels like two (rather different) films in one: one that embraces the gung-ho oddness of the source material and plows forward with cockeyed confidence -- and the ridiculously "safe" origin story that's been included simply because, well, that's the established formula that generally brings in $600 million at the box office. Had Green Lantern waded a bit longer in the weird end of the pool, and lost some of the patently dreary, outrageously predictable, clumsily edited origin story, we'd probably have a cult classic waiting to happen. Alas, what we're left with is one schizophrenic little flick, one that has a lot of eye candy worth savoring, but next to nothing in the departments of wit, depth, heart, or insight.