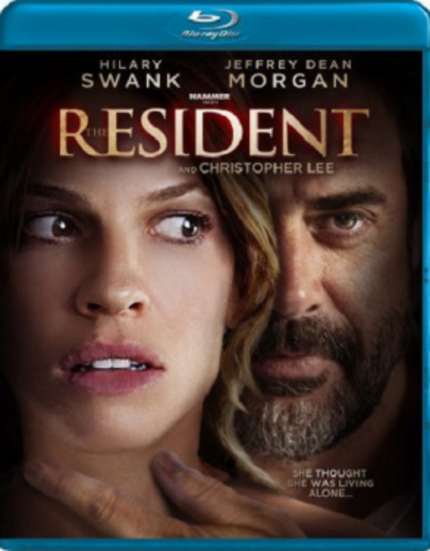 I've waited a while to chime in on this one because I just didn't want to face the truth. It breaks my heart to say it but The Resident is a step above a solid TV movie, no more. The fact that it is a Hammer production barely registers at all. Even the solid performances from all concerned don't do much to help a story that seems determined to realize itself as a simple been there done that psycho thriller.

The fact that most viewers will know the ending before this film reaches the halfway point would be forgivable if the film gave us anything other than the transparent mystery to dwell on. But the development of the characters is more or less non-existant. As the box art indicates,Jeffrey Dean Morgan is a psycho, Hillary Swank is a victim. The only red herring is the inimitable Christopher Lee who, unfortunately, has too little screen time.

There is some decent claustrophobic camerawork but there are also too many shots of people running through the walls of the house. The lack of extras just reinforces the lack of confidence that anyone had in the finished product here. For completists only.

Do you feel this content is inappropriate or infringes upon your rights? Click here to report it, or see our DMCA policy.
Antti JokinenRobert OrrHilary SwankJeffrey Dean MorganLee PaceChristopher LeeDramaThriller