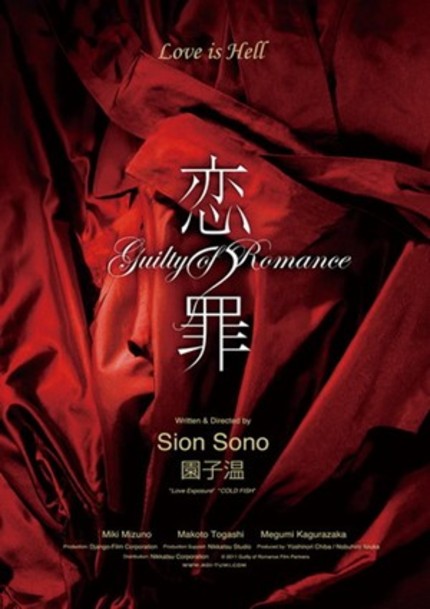 Once again Japan's Sion Sono tackles a true crime story with Guilty Of Romance - last year's Cold Fish also had roots in real events - and once again the results are a devastating look into the dark heart of humanity. A twisted fusion of sex and death Guilty Of Romance will surely shock those unfamiliar with Sono's previous work while challenging his long time fans with one of his most unsettling works.

Kazuko (Miki Mizuno) is a police officer called in to investigate a murder - the call arriving as she is in mid-liaison with an unseen lover, the victim cut into pieces with the pieces used to create two separate corpses using mannequin pieces to augment the body. What Kazuko finds while trying to determine who the corpse was in life and how they ended like this is every bit as shocking as the corpse itself, a story of twisted desires and self empowerment gone badly wrong in the intellectual classes. She will discover the story of two women who, despite appearing respectable on the outside have all manner of darkness hidden away.

First, there is Izumi (Megumi Kagurazaka, Cold Fish). The wife of a famous novelist, Izumi is more of an accessory than a partner. Though her husband is not cruel he is distant, uninvolved emotionally or sexually and demanding of an incredibly ordered household. His beautiful young wife is wasting away, trapped alone in a house with more idle hours than full ones. And so she finds a part time job and then another finds her in the form of a modeling agency that flatters Izumi and cajoles her into coming in to do a shoot, where she discovers that the work starts at underwear and moves on to porn. But though Izumi is at first shy she soon learns to love the feeling of being wanted, of being found attractive, and so she takes on more and more jobs, each becoming more and more explicit, thriving on the attention she can command outside of her home.

And then there is Mitsuko (Makoto Togashi), a professor of literature who doubles as a street hooker by night, an unlikely double life fueled bu childhood daddy issues and a belief in the power given over men by demanding cash for sex. The two women meet, with Izumi swept up in Mitsuko's wake, and they spiral into increasing depths.

Throughout his career Sono has proven himself an auteur of inner darkness, a director given to exploring primal urges that most often end in bloodshed. Though always dark it seems that his recent excursion into true crime stories has pushed Sono to new extremes as he paints his savage portraits of real life brutality. Sono is bold with his choices, and fearless, and he gets the same from his trio of actresses, the end result being a picture that will offend many at points and most certainly attract some accusations of misogyny - I personally believe these pictures are more misanthropic, with all of humanity coming off badly regardless of gender - while others will find something disturbing, yes, but also strongly compelling.

At its core a story about the struggle for identity and personal power, that struggle gone badly wrong the more that sexual desire is introduced into the equation, Guilty of Romance fuses graphic violence with strong sexuality while assaulting the notion that women asserting power by being attractive to men is any sort of good thing. His three leads are very strong with each delivering performances that bare the soul as much as the flesh. And with so much flesh exposed, that's a lot of soul.

It is worth noting that Guilty of Romance is screening in Cannes in two different version. There is the long version screening in Director's Fortnight - which this review is based on - and a significantly shorter version screening in the Marche Du Film for sale to foreign markets. Though I have seen only the long cut it is my understanding that the shorter version has been fully endorsed by Sono and that the shorter run time was achieved by largely Miki Mazuno's police investigation plotline to leave the focus more squarely on Izumi and Mitsuko.

Do you feel this content is inappropriate or infringes upon your rights? Click here to report it, or see our DMCA policy.
Sion SonoMiki MizunoMakoto TogashiMegumi KagurazakaKazuya KojimaDramaHorrorRomance

More about Guilty of Romance