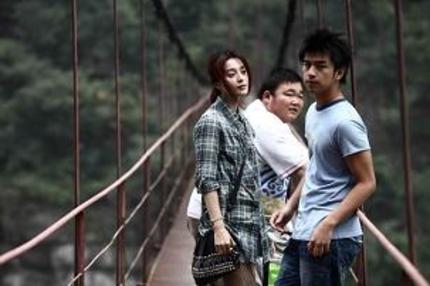 If you go into Li Yu's Buddha Mountain wanting more of the crude two fingers at mainland Chinese censors that was her earlier Lost In Beijing, you'll probably walk away disappointed. Buddha Mountain is still a raw, down and dirty little drama trailing a group of troubled urbanites while they try to sort their lives out, but it's considerably more restrained. It's an awkward film, showy and occasionally contrived with technical chops all over the place, and you've seen the general premise before, but there's much less in it that's gratuitous, the protagonists feel worth rooting for and the big moments are surprisingly subtle.

Nan Feng (Fan Bingbing, Shaolin, Sacrifice), Ding Bo (Wilson Chen, My Airhostess Roommate, Waiting in the Dark) and Soap (Fei Long) are three carefree slackers scratching out a meagre living on the back streets of Chengdu. The bond they've cultivated means they stick together no matter what, be it helping each other out with money or backing down anyone who humiliates them, regardless of the odds. When Nan Feng decides she's had enough of her family and moves out, the trio decide to room together, renting from retired Peking Opera singer Chang Yueqin (veteran Sylvia Chang, in her first film role since The Go Master back in 2006).

Some of what follows is predictable; comic hijinks, gently barbed riffs on the generation gap and life lessons passed across the divide. The trio don't think much of Chang's rules and regulations, and scorn her clinging to her memories of a bygone age and the awful tragedy that stopped her life cold. So far, so obvious and yes, it turns out that much as the three of them provide the impetus to jolt Chang out of her funk, she's the stabilising influence they need to confront the issues threatening to wreck their friendship.

But for the most part, those issues are treated as real, meaningful problems. Nan Feng, Ding Bo and Soap nurse crippling flaws as much as they're full of youthful high spirits. They're not the deepest characters going, but they're fairly multi-faceted - once the story introduces Chang you realise sometimes these young people are not only rude but actually cruel, and reckless with it. They trample over the older woman's grief and drag her secrets into the light without a clue what they're doing. While their energy and enthusiasm is endearing - they're dumb kids, but their friendship is precious - they're obstinate, thoughtless and self-destructive.

Nor is it merely a case of each side leaning on the other to learn how fantastic they all are. The title comes from the characters' journey through the surrounding countryside, and the ruins left after the great Sichuan earthquake in 2008. The slow realisation life goes on, and that there are better things they could be doing is a crude epiphany (illustrated with actual footage from the quake) but an effective, believably human one. Though these are two very different approaches - pesky kids versus patient, artful life lessons - and Buddha Mountain feels torn between the two.

Lu doesn't quite seem to know whether she wants to make another brash, abrasive look at the poor clinging to China's underbelly or a glossier, more contemplative arthouse production. Nan Feng's karaoke gigs to earn some scratch would suggest the one, but the dramatic vistas around Chengdu hint at the other. The film swerves back and forth between long stretches of attention-seeking pop video jump-cutting and dreamy, symbolic montages. While the unspoken revelations hit home, the script falters over exposition, or most points where characters explain what they're thinking. Some of Chang's Big Reveals are laughably histrionic where they ought to be bitterly emotive.

And Fan BingBing seems to have got herself a little too closely involved in the project. Listed as a producer for her second film with the director, the role of Nan Feng feels rather too much like vanity casting, and it drags the film down quite some way. Fan is arguably a very talented actress - her terrific turn in He Peng's Wheat suggested there was much more to her than shallow romcoms. But while she can do free spirit or wild child, she's not quite up to menacing or intimidating. Fan tries, and the effort she puts in is a pleasure to watch, but moments like the early scene where she cows the gang who bullied Soap elicit nervous laughter as much as anything else. It gives the impression a little distance on her part might have benefited everyone.

But when Buddha Mountain works, and it does frequently work, it's a joy. These are good people - frustratingly flawed, but genuinely anxious to reach out and help the people they care about. Each of those dreamy montages is a thing of rough, yet breathtaking beauty, and while there is a moral (there's even a character who exists solely to make sure the leads understand they've learnt something) it's a heartfelt one that never feels heavy-handed or judgemental. Despite all its flaws, this is a solid, rewarding little drama well worth anyone's time and comes recommended.

Do you feel this content is inappropriate or infringes upon your rights? Click here to report it, or see our DMCA policy.
Yu LiLi FangSylvia ChangBingbing FanBo-lin ChenFei LongDrama