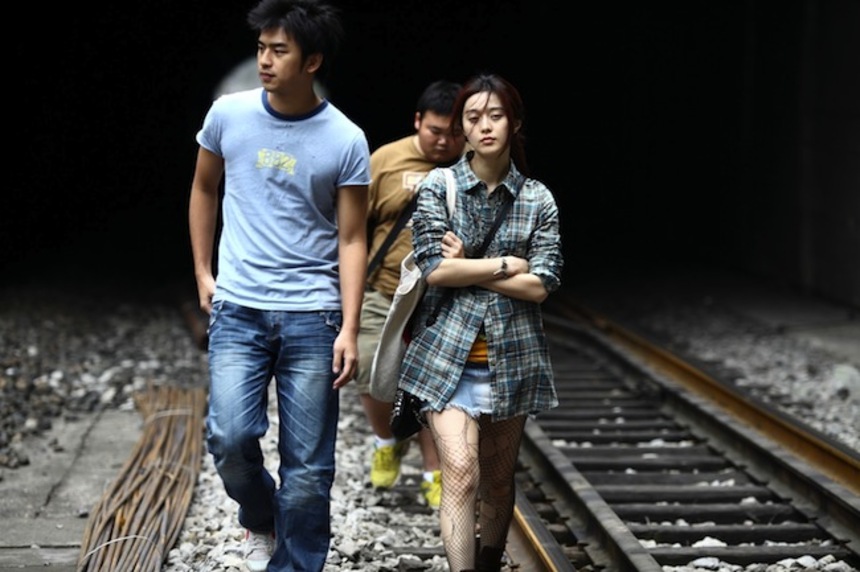 [Once again, our thanks to Mark Popham for the following review.]

Watching Old Fish for NYAFF, back in 2009, I was struck with how the film had basically the same plot as a standard Hollywood action movie- not a Bourne Identity, but some mid-level modern B-movie like S.W.A.T.- but filmed entirely in a neo-socialist realist style. Without the same amount of calcified genre tropes, a generic storyline got a very new update. The same can be said for Buddha Mountain- after the first thirty minutes, I suddenly realized that it had almost the same plot as the 80s television show Diff'rent Strokes. Whether or not Buddha Mountain improves on the saga of les fils Jackson depends largely on both how interested you are in documentary presentations of modern Chinese life and how willing you are to wait out a series of beautifully shot but otherwise interminable sequences to get to the actual plot.

Which is as thus: Ding Bo (Chen Po Lin), Nan Feng (Fan Bingbing) and the corpulent Fei Zao (Fei Long) are three shiftless young people, making their way in Chengdu on the barest of skills and the scantest of family connections- Ding Bo's estranged father is remarrying, and both Nan Feng and Fei Zao have fled abuse-ridden living situations. When their decaying building is slated for demolition, they begin renting rooms from Chang Yue Qin (Sylvia Chang), a retired, brittle Chinese opera singer secretly mourning her deceased son. One can almost hear the pitch for the Hollywood remake- can these mismatched roommates live together without driving each other crazy?

Thank God, Buddha Mountain is a bit more subtle than that, and the first two thirds of the movie- watching the hapless trio, their initial encounters with their extremely formidable landlady and their eventual friendship- is really delightful. The thoughtless ways that they impose on Chang Yue Qin, and her even-tempered means of revenge, are hilarious, while Qin's loss is explained in a series of serious and extremely heartbreaking scenes.

Sadly, the final third of the movie attempts just a little too much, ping-ponging between tropes of new Chinese cinema (someone returns home, is disappointed by their parents, is hurt by the newly litigiousness society, is subject to a series of low-level offenses from the police, etc.) and introducing a romantic subplot that could have just as well remained in the background.

As is, you feel like you're all of a sudden running a marathon, and while the end is emotionally effective, much of the impact is lost simply because you've been expecting an end for the previous thirty minutes. With judicious edits, this could be a classic- as is, however, it's still worthwhile.

Do you feel this content is inappropriate or infringes upon your rights? Click here to report it, or see our DMCA policy.
Yu LiLi FangSylvia ChangBingbing FanBo-lin ChenFei LongDrama