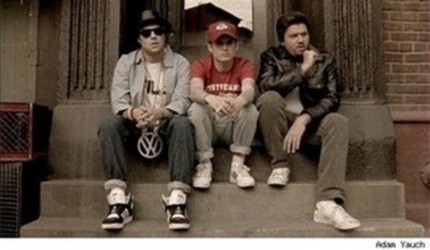 UPDATE A couple days ago The Beastie Boys put up the International Version on YouTube. You can find it embedded below. Play the spot the celebrity game with us.
Adam Yauch's short film Fight For Your Right Revisited - featuring an all star cast including Will Arnett, Seth Rogen, Elijah Wood, Ted Danson, Robert Downey Jr, Jack Black, Will Ferrell, John C Reilly and more - is now available in its entirety for your viewing pleasure. Which is awesome. Except that it's being hosted by MTV who seem to think this is of interest only to people in the US, which is significantly less awesome. Because I'm not. I can get the embed code and put it in this post - which I have - but I can't actually watch it.

So, thanks, MTV. You do actually have a network here in Canada, too, you know? And in other parts of the world. Fighting chance some of your audiences in those places might have wanted to see this.
Sign-In to Vote
Tweet Post Submit

Do you feel this content is inappropriate or infringes upon your rights? Click here to report it, or see our DMCA policy.
Adam YauchElijah WoodDanny McBrideSeth RogenSusan SarandonShortComedyMusic

More about Fight For Your Right: Revisited