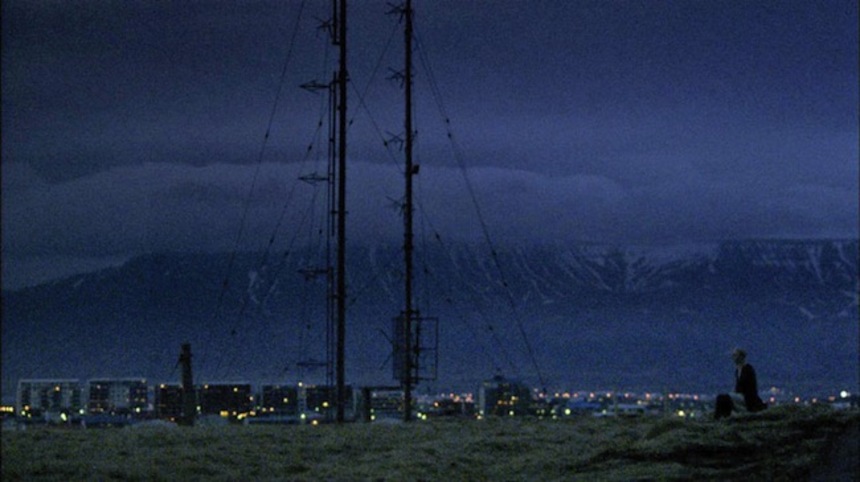 Back again with a selection of six films from Tribeca's short film selection. We've got possible space ships in Iceland, mustaches, avant-garde experiments that dazzle the eye and turn the mind on end... the sun, the moon, and a kiss.


The story of a man, his mustache and the girl they fall for, Jac Schaeffer's Mr. Stache may sound cloyingly cute (complete with perky narration by someone that sounds oddly like your weird, over-eager aunt) and it kind of is, yet Schaeffer (working from an idea by "My Movie Pitch" winner, John Nash) pulls it off in a wink-wink/nudge-nudge kind of style that is hard not to like. And the 'stached man is played by Mad Men's Rich Sommer, an indubitable everygeek, who is also hard not to like. Plus there are a lot of mustaches of various lengths and varieties for your viewing pleasure.


Logi Hilmarsson needs to make a feature. Not to detract from his short, Gravity, but if he is able to replicate and expand upon the humor, magic and nuance he displays as a storyteller here, than this Icelander is ready. His rapport with the three leads, and their ability to turn from wit, existentialism, romance and metaphysics on a dime is enduring and entertaining. The film's simple visuals keep things grounded in a very familiar reality, yet all the same conjures up a unique and engrossing world. One that I'd happily visit again.


In The Green Wave, Ken Jacobs plays with one tiny sliver of footage - that of an ocean wave just off shore - over and over again. Starting out in a vertical aspect ratio, he begins to expand and reconfigure perspective, shape and inversion.  A hypnotic and transformative five minutes.


The Ignorant Bliss of Sun and Moon wants to get at something profound - something simply, beautifully profound - but John Hymas's approach feels a bit off. A drug-addled man swings from highs to lows, with the sun and the moon watching his every move, until one day he chats 'em up and starts to take a new path in life. I'm not sure if the voice-over narration is clever and well-written or just overbearing in tone.  The film isn't poorly made, it is just perhaps a little too trite for my taste.


Clifford Ross takes one high resolution photograph of Colorado's Mount Sopris, and with the help of composer Philip Glass, turns Harmonium Mountain into a celebration of color and perspective. It is a journey that upends, and puts back together (although perhaps not in the same way) our relationship to landscape as objective... or subjective.


Hopped up on booze from late-night festivities, two girls, seek relief from the heat of the Australian summer in a water tank reserved for brush fires, in Ashlee Page's exceptionally crafted The Kiss. Swaying from tranquility to full-on tension  - a testament to Page, DP Nick Matthews, and actresses' Nicole Gulasekharam and Briony Kent - the film never manages to lose that ethereal, youthful verve it begins with, even as terror and panic spread throughout every fiber of the frame.

The Green Wave plays in the "Impressions of Memory" Program: April 29 and May 1

Harmonium Mountain plays in the "All You Can Eat" Program: April, 29 and May 1