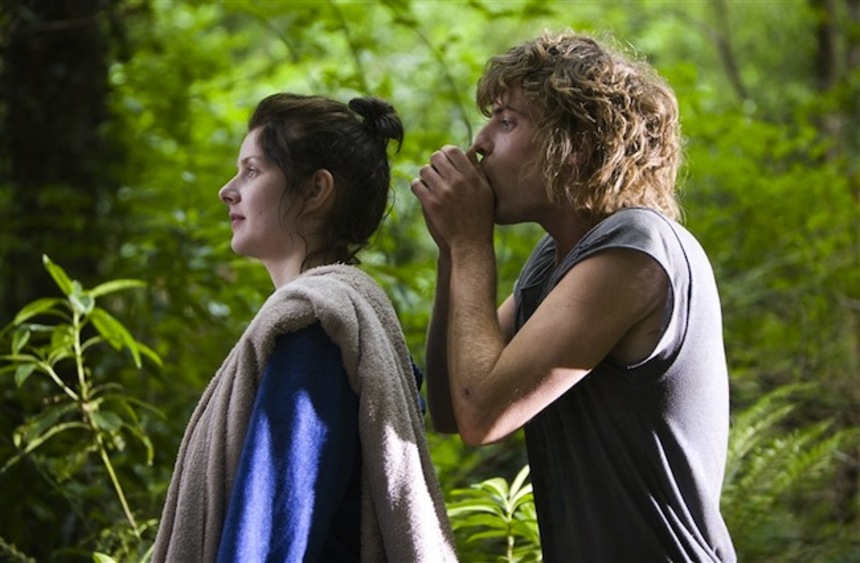 There are those times when you hear about a film, just get a brief sense of the mood it is trying to convey, you start to read the plot synopsis, don't want to spoil something for yourself any further so you stop out of pure excitement and anticipation for the film. And then it is time to wait... Even if just for a few days, ideas start to form in that noggin' of yours, of a time, a place, characters, extensions of that mood, and pretty soon a vague but swiftly tilting picture of a movie, maybe not the movie you're waiting for, projects itself across the inside of your forehead. And you know you should stop, and wait, this is a bad idea, and then the day comes when it is time to see the actual film.


This is going to be the hardest review I write at this year's Tribeca.


James Furlong (Harry Treadaway) comes from a strange lineage. All the males in his family exhibit special powers under certain circumstances. His grandfather goes blind for approximately thirty-seven minutes every time he thinks about sex. When his father gets scared all mechanical devices go kaput. And James' power, even before he comes out of the womb manifests in the death of his mother.


Agnes Merlet's dark fairy tale begins under these magical and mesmerizing circumstances, complete with narration by Rachel Hurd-Wood's Mae-West O'Mara, a character we won't yet see for a good fifteen minutes.


The power of death continues to swell in James; that is the killing of everything around him -cows, grass, flowers, his grandmother, his father...

And so at eight, James runs away into the woods, to lead a solitary life. Ten years on, this is where Mae, having escaped from the cancer ward at the once-reformatory-now-hospital, finds him; with the mane of a lion, slack jawed, crouched in a shack, nestled in a grove of dead things.


For as rich a prologue as we've got, Hideaways ends up being very simple for most of its running time. And this is where the film experiences some narrative problems that ultimately downgrade it from something I was so absolutely close to loving, to a film with some beautiful passages and some frustratingly flat stretches.


What works: Tim Fleming's drop-dead gorgeous cinematography, which syncs up so damn well with Eric Neveux's score, oh how the tears swell in your eyes at just the faintest hint of strings playing over a line of sun-bleached trees (and that is not sappy I tell ya). Reminiscent of a fairy tale painting, recalling expressionistic filmmaking, ultimately the look is very naturalistic, taking as much aim at piercing inside the character of a fern or a bush as to the sculpture of the human face; and this is never for show, no image is ever so hollow. When light hits Mae's eyes, it's like you can see whole worlds being born and being destroyed on ad infinitum inside them... hyperbole, hyperbole, hyperbole... this is a flat-out feast of a film to look at.


Hurd-Wood, keeping a fairly low profile outside of 2003's Peter Pan and Perfume: The Story of a Murderer, is seemingly (as those previous films would suggest) a contemporary teen descendant of the women of Grimm and company. The pathos of Snow White, Cinderella and Sleeping Beauty runs through her veins. Mae, suffering from her own family curse of cancer, is inquisitive, kind, and very resilient. Hurd-Wood's chemistry with Treadaway is instant, the two are a joy to watch, and their romance is the heart of the film. Though yes, the path it follows is an expected one, much of what happens still endears, except...


... their romance can't fill the whole film, at least in its current form, and so a somewhat lazy attempt at bringing in more conflict in the form of an antagonist occurs. Now what Merlet and screenwriter Nick Murphy present fits with the rest of the story, and is very interesting in idea, but it somehow feels sloppy in execution, coming too little, too late. The stakes are ultimate and yet the tension feels strained. This, and a few other smaller structural/ narrative choices hurt the film, not greatly, yet enough to color its waters with rust.


But please, don't let what I cite as faults deter you from seeing Hideaways, because it is without a doubt a very rare kind of film; one filled with breathtaking imagery, and two great central performances, if I were asked how to describe Hideaways in one sentence I'd say, "it's like if Neil Jordan did a live-action adaptation of a Miyazaki flick." And that's really a testament to Merlet's own vision. To compare and contrast and do mash-ups in the halls of the greats, through the pages of world mythology, only to find you still must look at Hideaways as just Hideaways... well, that is the mark of a memorable film.

Do you feel this content is inappropriate or infringes upon your rights? Click here to report it, or see our DMCA policy.
Agnès MerletNick Vincent MurphyRachel Hurd-WoodHarry TreadawayThomas Brodie-SangsterSusan LynchFantasyThriller