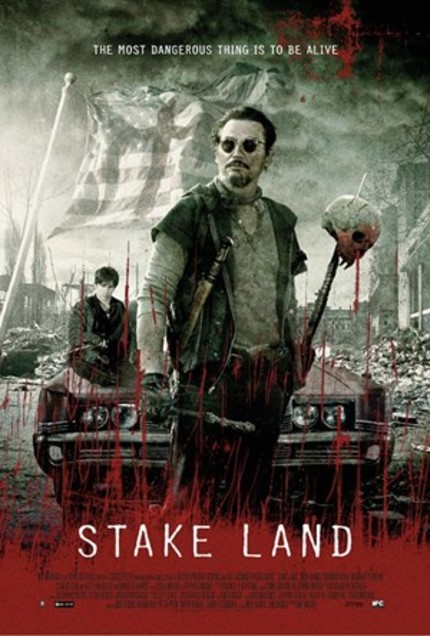 (This is cross-posted from my blog over at Grady Hendrix.com where I write about movies and machine guns on a regular basis. Originally posted when the filmed at the Toronto Film Festival it reappears now for the public release.)


"And then all that goodness was ruined by Christian crazies dropping vampires out of the sky."

Any movie that has a line like that in it, and that means it literally, is my kind of movie. Fundamentally nuts, Jim Mickle's STAKE LAND is essentially a movie about people running away from vampires. And that's it. But it explores the idea of people running away from vampires so thoroughly that it blows away lots of the ostensibly more ambitious films also playing at the Toronto Film Festival simply through the purity of its ambitions and the rough, redneck energy of its filmmaking. This is a film that is totally comfortable with being a b-list, genre flick, a straight-up shot of exploitation moonshine with no chaser and as such it is the best movie it could possibly be. Just think of Jim Mickle as an American Neil Marshall (The Descent, Dog Soldiers) and you'll have an idea of what you're in for.

Mickle's previous film, MULBERRY STREET, was a stripped-down end-of-the-world-because-we're-all-getting-eaten-by-giant-honking-rats flick shot on a shoestring in one location. A lot of people thought it was so clench-jawed and fuel efficient because Mickle made if for $3.45 plus a Quiznos half off coupon. But actually, STAKE LAND goes to show that Mickle doesn't know how to make a movie any other way. He directs the way a three year old drives: he jams the pedal to the metal and plows through anything in his way.

The story follows Martin (Gossip Girl's Connor Paolo) who teams up with Mister (Nick Damici) to try to get away from a vampire plague sweeping the nation. Mister is the Punisher of the vampire world: he likes killing vampires because it gives his life purpose. And because it's cool. The two of them take off through a post-apocalyptic America that feels like a Lynyrd Skynyrd song: all Harley hogs and country bars and cowboy boots and Bowie knives. Because of all the lousy, stinking vampires the survivors of the plague have either become giant assholes, turned to religion or started having yard sales. This is very depressing. Mister and Martin on the other hand have responded to the plague by packing a bunch of weapons into a muscle car and wiping out vamps with stake-fu. Now ask yourself: which are the real Americans.

STAKE LAND is basically the story of Martin and Mister's Amazing Vampire Killing Road Show with stops for Kelly McGillis (playing a nun) and some other interludes, most motivated by the fact that Martin's peach fuzz charms are like catnip to the ladies, vampire and nonvampire alike, who haven't seen a non-bearded and non-stinky man in some time. The gore flows fast, free and wet, but the movie's greatest special effect is Nick Damici, who was also the star of Mickle's MULBERRY STREET. Damici has all the craggy authority and tight-lipped intensity that it takes some actors a lifetime of being left out in the rain overnight to achieve, and he doles it out in heaping portions. There hasn't been a man this macho in a horror movie in a long time, and sneaking into screenings of STAKE LAND is going to jump start puberty in 12-year-old boys everywhere.

You can project a lot onto STAKE LAND, the same way that people go back and read context and meaning into Howard Hawks's films or Walter Hill's. But, like them, Mickle is just happy and unashamed to be making a genre picture with no pretensions to Deep Meaning. One could say that the fall of George Romero happened because he started telling people what his movies were about rather than just making them. Mickle hasn't fallen into that trap. As of now, he's just making movies and if you want to read theory onto them, that's your business not his. But in the meantime, if you want to see people run away from vampires, and occasionally skewer, slice, chop and mutilate them, then you're in good hands with STAKE LAND.

Hooray! Grady gets a byline! I read this at your site a few days back, sounds cool.

Entertaining review for what sounds like a happy-to-be entertaining flick. And welcome aboard. We're clearing a whole aisle just for you, good sir.

"One could say that the fall of George Romero happened because he started telling people what his movies were about rather than just making them."

I would argue that his fall happened because he got lazy and started making zombie movies that were absolute shit because he knew his fanbase would flock to them no matter how bad they were.

Anyhow, I'm seeing the Saturday afternoon screening of Stake Land and was looking forward to it, but now I'm really stoked for it. I've been underwhelmed by the other two Midnight Madness entries I've seen so far (Vanishing on 7th Street and Insidious), and the only two screenings I have left are for this and The Ward...I'm hoping at least one of them is good...

So. Goooooooood! I heart this review as much as the film.

blog about Stakeland on our new site- populate us and we will post TwitchFilm.com's blogfeed into our blogroll!
Check out my social media site for film fanatics and professionals! Http://www.LoveCinema.com is in Beta- we’d LOVE for you to be a part of our audience interactive community. Bringing people together online – to watch and make movies- offline.