THE BIRDS over St. Louis! 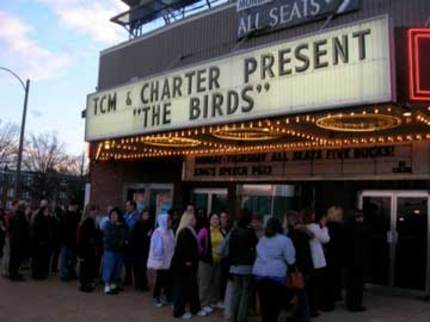 On the evening of Monday, April 4, my hometown of St. Louis, MO was lucky enough to have hosted one of the ten-date stops of the TCM Road to Hollywood tour. The tour aims to raise awareness of classic films by allowing them to be experienced in the rare theatrical setting, and with a star from each film in attendance, doing on-stage Q&A with a TCM personality. Films include "North by Northwest" (with Eva Marie Saint), "The Manchurian Candidate" (with Angela Lansbury), "Rio Bravo" (with Angie Dickinson), and perhaps most amazingly, "Smokey and the Bandit" (with Burt Reynolds).

For St. Louis' turn at bat, TCM's Ben Mankiewicz welcomed Tippi Hedren, star of Alfred Hitchcock's "The Birds". The pair reminisced for before the packed house (over 100 people were turned away from the free event) at the historic Hi-Pointe Theater for about thirty minutes before clearing out for the film itself.

The chat went pleasantly enough, Mankiewicz having mentioned that this is the third time he's interviewed the star. Rather than feeling stale or rehearsed, the pair was quite comfortable, with Hedren recounting her humble beginnings - and endings. Having been discovered by and ultimately professionally undone by Alfred Hitchcock, whom she makes no bones about calling "cruel", "controlling", and personally obsessed with her, Hedren, pleasantly and free of bitterness, told her familiar and troubling story. Left with that to chew on, it's no wonder that once the film began, Hedren's name drew applause during the opening titles, while Hitchcock's was met with awkward silence.

As for the "The Birds" itself, the 1963 film certainly stands up, even if it is far from one of Hitchcock's greatest. Historically significant as a horror film, it is credited as popularizing the "nature run amok" sub-genre, which most notably includes Steven Spielberg's "Jaws". Hedren is wonderful in the lead of "The Birds", the latest of Hitchcock's elegant and radiant young blondes. (She would go on to star in 1964's "Marnie" for the director before falling back into relative obscurity.) The first hour unfolds at a nearly torturously slow pace, while the things really pick up in the second, as the inexplicable phenomenon of unprovoked bird attacks ramps up to intense proportions.

Hitchcock's then-state of the art visual effects (mechanical birds, Ub Iwerks animated matte effect birds, etc.) drew their share of unintentional chuckles, but not as many as the forced plot twists and sometimes-laughably unmotivated character actions. (Why does Hedren follow Rod Taylor sixty miles to his Bodega Bay home after one chance encounter? Or: Once every one else in town is either dead or gone, why do they insist on holding their ground? Or: Why on earth does Hedren go up those steps and into that bird-infested room at the end??) On the whole, "The Birds", seen in this context, stands up as a ridiculously sublime film - and one that would be merely ridiculous in the hands of any other filmmaker.

Four dates remain in the Road to Hollywood series: "The Birds"/Hedren again in Long Island, April 13th, "Rio Bravo"/Angie Dickinson in Austin, April 16th, "Elmer Gantry"/Shirley Jones in San Francisco, April 19th, and "From Here To Eternity"/Ernest Borgnine in L.A., April 21st. Passes are free, and must be obtained in advance, but do arrive early. It all culminates with the TCM Classic Film Festival in Los Angeles (April 28 - May 1), which boasts an incredible line-up of dozens of drool-inducing films (among them: "Citizen Kane", "Taxi Driver", "Fantasia"... and "The Tingler"!). 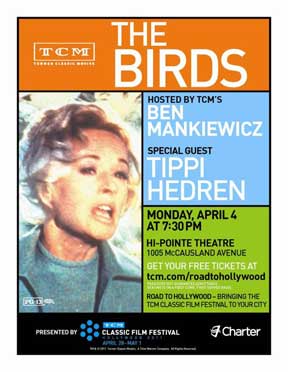