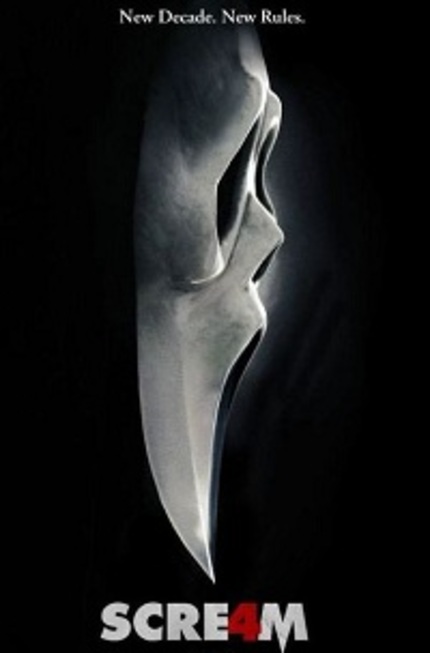 10 years on and the anniversary of the Woodsboro killings is in full swing in the small town. Ghostface masks hang from each lamp post and Sidney Prescott (played by a cardboard cutout of Neve Campbell) returns to promote her new book about surviving. But new decade means new rules and as the bodies start mounting those rules become clear.

"I'm not an app" rasps the Ghostface killer to the unsuspecting, fearless victim on the other end. Oh yes Scream 4 is here, not a necessary film by anyone's imagination, but a damned entertaining one no less. This reference to apps is only the beginning to how current and now it tries to be, throwing in Twitter, Facebook and iPhones.

Scream 4 is one of the most self-reflective meta-winks I have ever seen. The tongue is stabbing right out of the cheek here, never mind 'in' it. The film starts hilariously but predictably with two nubile teens as air headed victims, or does it? See, the film is self-aware of the past tropes of familiar horror and it utilizes exposes and abuses them in hilarious and unpredictable ways. Scream 4 is a mirror exposing the ugly face of by-the-numbers horror and slasher flick conventions and iterations of them. In particular how Saw 4 is 'torture-porn shit' and that 'they' are sick to death of 'little Asian ghost girls'. This over-analysis of the genre works well and sits somewhere between comedy and parody in terms of what it is trying to express. The film is so Meta in fact, that the characters reference how Meta it is, numerous times, particularly Courtney Cox playing Gale Weathers-Riley, the mid-life crisis washed up ex-reporter turned writer who does not even know what the word meta means! Although the joke starts to wear thin it is never particularly grating.

"Am I next because he didn't call me?" asks Kirby (Hayden Panettiere of Heroes fame who even references that she has 'powers' jokingly) "No" replies Dewey then hastily adds "maybe!" But this is a good question, as the rules of the game have changed considerably. Dewey Riley (David Arquette) remains the iconic bumbling policeman but is given nothing to do except be concerned and fumble a lot. Likewise with the majority of the cast who do not seem to have any purpose except reference the irony and use sarcastic wit concerning the situation they are in. Ghostface is equally unimpressive as the seriously weak killer - in one scene Sidney kicks him once which sends him ridiculously hurtling off the stairs - but the voice of Ghostface (Roger Jackson) is the most entertaining and twisted in all of the series, filled with spiteful descriptive threats and perverse confidence of how it will all play out for his 'cast' in his own personal horror movie.

Scream 4 typecasts from the previous films with characters constantly bantering about themselves, in particular the inept police officers guarding series newcomer Sherrie (Lucy Hale) and her house, along with the usual suspects; Sherrie's suspicious ex-boyfriend, overly friendly deputy policewoman and of course the two film geeks that live blog everything and host the annual Stabathon film marathon, Stab being the film in the Scream world based on the Woodsboro killings. The film imposes on the viewers the strangely suspicious behavior and possible motives of each character. This is ridiculous, obvious and hilarious but cleverly portrayed using timing - one leaves, another enters, usually after a murder - past connections and relationship to Sidney Prescott. The idea has always been that the killer is extremely unstable, and in Scream 4 almost everyone is seemingly nuts.

Scream 4 is purposely ominous, never scary and almost always funny. This nonchalant self-awareness is evident in every scene, even up until the last minute whodunit.

Scream 4 is also about our current era of communication. There is a surprising amount of social commentary in this slasher, arguably it is the best way to keep the horror brand current but there is some truth in its cynical look at media.

Overall I had a blast with Scream 4; it is hilarious and so wrong. The characters are paper thin and the real motives are ridiculous but right until the final scene Scream 4 keeps true to its intentions. It does not fit with the canon of the other three films (as silly as Scream 3 was) and this is definitely a good thing. The level of Meta and movie geekery exceeds any film that comes to mind and who this film is targeted to I am unsure, but regardless, Scream 4 is excellent cutting edge entertainment that does not mind indulging in the ludicrous to give you more bang for your buck. Here is hoping, however, that Scream 5 does not mirror Stab 5, the time traveling horror film contained within Scream 4. (how meta was all that!?).