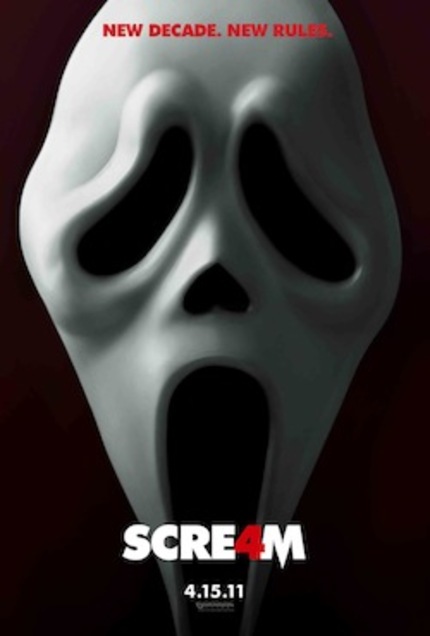 For a film so chock full of death, there's a surprising amount of resurrection going on here. Resurrection of not just the latent "Scream" franchise (the previous entry, "Scream 3", came out in early 2000), but also the feature film careers of series mainstays Neve Campbell, Courteney Cox, and David Arquette. Even if it just ends up being a temporary career resuscitation, that's still something. Director Wes Craven and creator/writer Kevin Williamson have managed to stay busy since "Scream" had seemingly wrapped up (Williamson opted out of "Scream 3", although Craven helmed them all), but this heavily marketed return to familiar territory (it's even back to the series' hometown of Woodsboro) certainly can't hurt. And then we have the biggest hoped-for resurrection of all - the other side of the "King's Speech"-fueled Great Weinstein Re-awakening of the past year - the return to form for Harvey's brother Bob Weinstein's genre outfit, Dimension Films. Indeed, the gang is reunited in yet another gory burst of mainstream slasher/whodunit, and this is one fan that's happy to see that happen.

But what about the movie, you ask? The good news is if you've ever enjoyed a "Scream" film, you're very likely to enjoy this one. Likewise, if you've never cared for them, I highly doubt this will win you over. "Scream 4" fulfills the most noteworthy aspects of the series - both the positives and the negatives. Yes, it's richly oozing with self-referential deconstructionist humor and story structure, but it also errs to the preachy side in the end, making its point so thoroughly that any and all ambiguity is slashed away. At least this time the point isn't, once again, that "movies don't make people into psychos, but they do make psychos more creative". That drum was sufficiently beaten by Williamson and company in the 1990s. Back then, the "Scream" films were hailed as refreshingly "postmodern", seeing how the characters within these slasher films had seen and tended to discuss at length other slasher films. By the time part three rolled around, which took the cast to Hollywood, dodging Ghostface on the set of a film within the film about the previous films, meta-overload kicked in. The series had officially become too clever, and was quickly moving up its own backside.

"Scream 4", with Williamson back in the writer's chair, seems to understand this, as this film begins with an illogically hilarious sequence that, while not approaching the raw horror of the original's now-iconic Drew Barrymore sequence, does not fail to amuse and engage. Overkill, perhaps, but as they are so fond of telling us, it's a new decade, new rules.

But is that really the case? Despite all the new blood on the surface of this self-aware sequel/reboot (Emma Roberts, Hayden Panettiere and Rory Culkin are all among the latest crop of high school aged scary movie buffs), there is a lot that is familiar about "Scream 4". As fresh as it sometimes feels, there are other moments that feel like the original "Scream" is merely being remade, slightly retooled for the Twitter generation. But just as that thought settles, one of the characters on screen inevitably addresses it head-on, managing a diffusion of some degree. Even the real life relationship of stars Courteney Cox and David Arquette is winked at, although this is one element that may've been better off ignored. Sometimes meta-clever can end up mega-uncomfortable.

Also alluded to is the way horror cinema itself has shifted in the post-"Scream" years, quickly dismissing "torture porn" as devoid of character development. The chronic remakes of classic horror films also get their valid skewering, as well they should. But one aspect doesn't quite ring true: The "Stab" film series (the slasher film cycle within the "Scream" world, based upon the 'real life' traumas of the main characters) never ended, even after running out of true-life gore to mine, and consequently turned stupid, reaching Part Seven here. (Really, if it never ended, wouldn't it actually be far higher than part seven? Oddly, no one in the movie ever addresses that quibble.)

In the film, Sidney Prescott (Neve Campbell) returns home to Woodsboro during a promotional stop for her new book "Out of Darkness", which details how she's somehow come to terms with surviving three films worth of mass murders that centered around her. Then the madness begins anew - Ghostface returns yet again -and the sizable cast of somewhat recognizable faces begins to drop like flies. Former investigative reporter Gail Weathers (Cox) is re-invigorated at the prospect of unmasking yet another killer, while her crazy-eyed sheriff husband Dewey (Arquette) bungles his way through the bloodbath. Meanwhile, the students of Woodsboro High School scoff the whole thing off, even as they incessantly webcast, text, and tweet every detail.

The fact that the high school students' horror-centric film club is all about adoring the same slasher films that Jamie Kennedy and company obsessed over in the first "Scream" seems like a bit of a stretch, considering that these kids wouldn't have been in pre-school when that movie debuted in 1996, and classics like the original "Texas Chainsaw Massacre" and "Halloween" were old then. "Scream" was important at the time because it managed to revitalize a flailing horror genre. It winkingly and fondly acknowledged slasher film shortcomings while at the same time it embraced and improved upon what worked. And it was a great time. There's simply no way for the comfortably familiar "Scream 4" to have that kind of resonance, even if the horror genre is once again in a dull rut.

Wes Craven, a filmmaker who tends to be only as good as his material inspires him to be, is back in the zone this time. Granted, some of his faux Hitchcock suspense set-ups are a little overcooked, but he does keep things moving at a fine clip even as he juggles umpteen characters, tonal shifts, and red herrings.

Like I said before, I count myself as a fan of the "Scream" series, and "Scream 4" did nothing to sway that stance. In fact, it may rank as my second favorite entry of the series, barely eking the competent but nerve-wracking "Scream 2" into third place. For any and all of its forgivable shortcomings, "Scream 4" is still four times as much bloody fun as any horror movie this year. Most people would not expect this level of care to be put into Part Four of anything, especially a "dead teenager movie". But if this is the level of quality we can expect from any future "Scream" films, then I wholeheartedly welcome the franchise back from the dead.