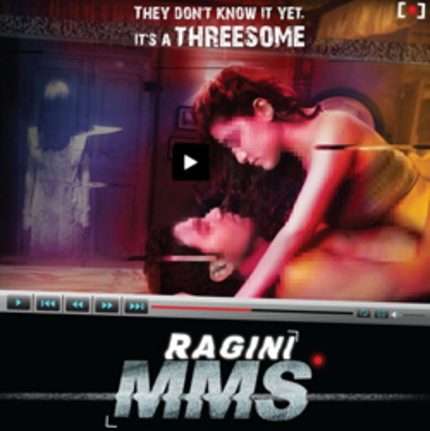 India's iRock Entertainment is trying to bring a new kind of film to the subcontinent this year, the scary horror film.  India has produced many horror films, but very few of them have been scary in any way.  This new movement it being spearheaded by producer Ekta Kapoor and her coming film, Ragini MMS.  The film looks to be a takeoff on surprise no-budget hit Paranormal Activity, but with a bit of a sexy twist.

Ragini MMS is on the cutting edge of popular film in India.  Most films, even today, try to appeal to the broadest audience, and that tends to curb the amount of sex and violence they include, but Ragini MMS seems to be pushing that envelope in a way that most films in India shy away from.  In fact, I've heard stories of scenes being reshot because they weren't "sexy" enough, which is odd, since so many films try to keep chaste.

The trailer looks like Paranormal Activity, which could be a good thing, that film was well received and successful.  We aren't sure if it will work with the Indian audience, but I think it has a fighting chance with a younger audience that is clamoring for more adult and westernized fare.

I popped a quick question off to iRock's CEO, Sid Jain about his hopes for Ragini MMS and he shot me back this note:

"I would like to say that, I am trying hard to launch and establish new genres in Bollywood and hope that international audiences that see Hollywood cinemas will give these Bollywood films a fair chance to bloom. They should look forward to a lot of firsts from irock. Bollywood's first found footage film, zombie film, vampire film, space adventure film and an animated sequel to a live action film."

He sounds ambitious, and that is a good thing in an industry that seems to be stagnating.  Bollywood likes to stay firmly within its established genres, namely the romance/gangster/family drama, and pushing beyond those boundaries would be a good thing.

We've already heard about the zombie film, Shaadi of the Dead, which is due later this year, but I'm excited to see what he does with the rest.

Ragini MMS is due in theaters May 13th, check out the first look teaser below.