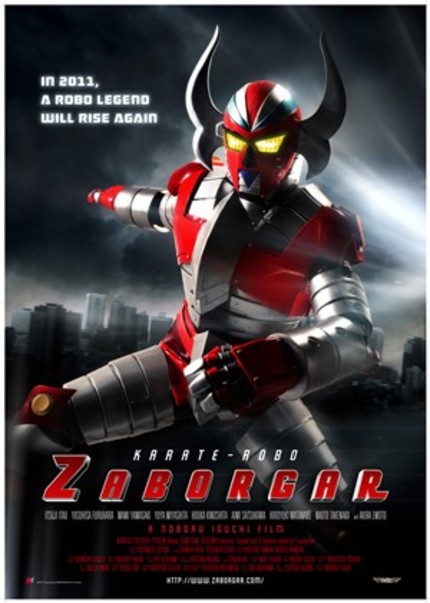 With Machine Girl and Robo Geisha director Noboru Iguchi's Karate Robo Zaborgar poised to continue its assault on foreign shores ScreenAnarchy is proud to have first look at the English subtitled international teaser for the film.

PART MOTORCYCLE, PART KARATE EXPERT, ALL ROBOT! WHEN THE SAFETY OF THE WORLD IS AT STAKE, ZABORGAR WILL SAVE THE DAY!

Following the death of his scientist father, secret police officer Yutaka Daimon inherits a mighty robot warrior named "Zaborgar." Equipped with an array of super weapons, an expertise in karate, and the power to transform into a motorcycle, Zaborgar assists Daimon in his fight against Sigma, the evil organization responsible for his father's death.

After uncovering a plot by Sigma to steal the DNA of Japanese politicians and use it in a giant robot weapon, Daimon faces off against Miss Borg, a beautiful female robot under the control of Dr. Akunomiya, the twisted leader of Sigma. Despite being on opposite sides of the law, Daimon and Miss Borg fall in love--a development that spells an end to the once inseparable crime-fighting team of Daimon and Zaborgar.

Twenty-five years later, the now-disgraced Daimon has been reduced to working as a chauffeur for corrupt Prime Minister Wakasugi. But Sigma, having at last finished its giant robot, is now preparing to unleash it upon the world. With no one left to oppose them, a worn, middle-aged Daimon is forced out of retirement and into service as a crime-fighter one last time. But will Zaborgar forgive and forget, and aid Daimon in his quest to maintain righteousness and save the world from total destruction?

From director Noboru Iguchi, creator of the international hits THE MACHINE GIRL and ROBO-GEISHA, comes a hilariously over-the-top tribute to the transforming robots of 1970's Japanese television, and an exciting action/comedy that will stir the heart of anyone who longs for justice dispensed at the short end of a swift robot karate kick!

Karate Robo Zaborgar premiered to great success at the International Film Festival Rotterdam and will soon be hitting festivals around the world. Check the new teaser below.