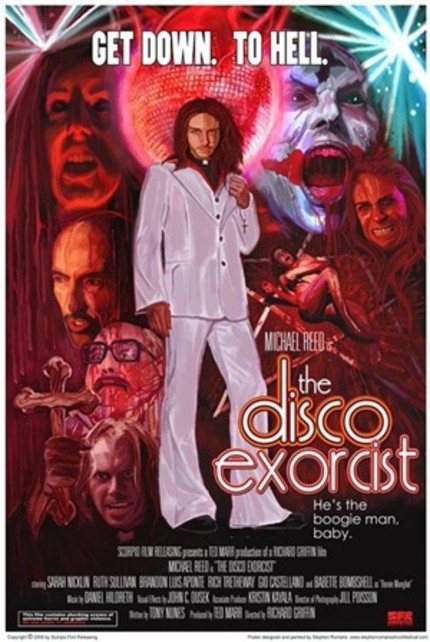 [Many thanks to Bryan White of Cinema Suicide for sharing the following review.]

The name Richard Griffin isn't exactly a household name. Indie genre directors are a dime a dozen these days and it's easy to get lost in the shuffle. Every one of them has a feature in the can that lifts ideas and aesthetic liberally from whatever their favorite movies were back when they were 13 and not very many of them are any good. That's why it sucks when a real gem gets swept away in waves of trash. It must be frustrating as hell to be the sort of director who has nothing but original ideas and a dedicated cast and crew that makes them happen only to have to wait in line behind a dozen other guys aggressively pushing their crappy microbudget post-apocalyptic zombie movie to whatever distributor you have your eye on. I suspect that being Richard Griffin is a lot like being that guy with the good ideas that I described.

No, Richard Griffin is not a household name but with The Disco Exorcist in the right hands, he very well could be. With a dozen features under his belt and numerous short films, Griffin has put Providence, Rhode Island on the map as the most unlikely destination for trashy exploitation revivals. He's dabbled in the aforementioned crappy zombie picture but it didn't take him long to find a functional and dedicated cast to carry out his weirdest dreams about an ancient order of nuns that have fought organized crime throughout the centuries affording himself an unlimited supply of crass blasphemy gags. In Griffin's world, there's a mountain of comedy to be mined from an idea about using vampires to produce the ultimate in niche porno. Yeah. He's that kind of director but his latest feature, The Disco Exorcist, may turn out to be his finest hour.

Rex Romanski has it made. By night, he rules Manuel Roja's disco with an iron fist. Women want him. Men want to be him. He has the sweetest clothes and the sweetest dance moves. Mountains of booger sugar propel him through numerous adventurous sexual encounters daily and nightly. Rex's latest conquest is Rita Marie. The two of them share a dance that takes them all the way back to Rex's pad to knock boots. However, Rita is turned out the following night when Rex's attention is captured by porn star, Amoreena Jones.  This is pretty much how it goes for Rex but he never banked on Rita being tight with the forces of darkness. In a rage, she curses Amoreena, causing her to occasionally black out, now under control by a demon that makes many attempts to kill Rex. If Rex plans on living to boogie another night, he's going to have to get his act together and cast out the demon with what few resources he has available to him.

If The Disco Exorcist does one thing, it establishes Richard Griffin as the heir apparent to the title of Mayor of Tromaville. Every single shot in the movie channels the essence of low-brow like Lloyd Kaufman, Charles Band and John Waters put together. Originally intended to be shot on 8mm film stock for an authentic grindhouse appearance, the staggering cost of shooting an already very low budget feature forced Griffin to process the film through several phases of digital film damage effects and the end-product is remarkably authentic. There's a whole new generation of filmmakers out there zeroing in on producing trashy throwbacks with a certain washed out, trashy look to their films but the toils of their labor is always frustrating and forced. Griffin and crew make it look easy. Every frame of this already nasty picture is dripping with sleaze dripping out of the over-saturated blacks in the picture.  To boot, the picture is backed with a remarkably genuine disco soundtrack, a quality of Griffin's pictures that never cease to amaze me. The fact alone that he has original music compositions, often times employing song and dance numbers from his cast, is stunning since few films operating in this band of the low-budget spectrum have the time or money to dedicate. The music from The Disco Exorcist actually feels as though the composers listened to more than just the Bee Gee's soundtrack from Saturday Night Fever, too, with spacey Italo Disco numbers turning up from electronic music duo, Owen Thompson and Timothy Fife.

A sleazy look and killer soundtrack means nothing if it isn't supporting a kickass script delivered by a capable cast. Griffin found his recipe for success several years back and he keeps recycling his cast for excellent results. The earlier reference comparing Griffin to John Waters is evident in this aspect as The Scorpio Film Releasing cast list is a rock solid gang of lovable degenerates, gleefully flying the face of whatever social taboo is at the center of Picture X. The Disco Exorcist finds Michael Reed, typically playing the sidelines in minor characters with some of the best scenes, front and center as Rex Romanski, fearlessly grinding and humping up on whatever actress he's paired with. Reed is an extremely charismatic actor with the sort of presence that the picture demands. The Disco Exorcist needed a charming lead and found it in Reed. Opposite Reed is the villainous Rita Marie, played by Griffin regular, Ruth Sullivan, also usually relegated to minor comedic roles. Here she is completely out of control and frightening, flipping the comedy on its ear when her role calls for her to break down in jealous histrionics. What starts as a silly horror flick packed with extremely explicit sex scenes breaks down into something much more grim and serious as Sullivan delivers genuine anguish on screen. Her turn as Rita Marie is easily the most surprising aspect of the flick were I not already shocked by the staggering volume of naked dudes and chicks, something usually not found in a Scorpio release. Finally, it wouldn't be a Richard Griffin movie if actress Sarah Nicklin didn't turn up here somewhere delivering the most varied performance of the entire movie. Sexy, femme fatale, psychopath under the thrall of a powerful demon, she's capable of pulling it off and remaining extremely easy on the eyes all the while.

The Disco Exorcist is what it is and it doesn't call for its cast to dig too deep seeing as it is just a low-rent good time movie that pairs well with Mad Dog 20/20, but the script by Tony Nunes is, dare I say, sophisticated for a Richard Griffin flick. Comedy is hard to write and even harder to deliver properly but this is a tight unit that has a ton of training behind them to handle Nunes' gags and even the hired guns like Babette Bombshell (A cross between Divine and Elvira, for the uninitiated - turning up as porno director, Bernie Munghat) achieves with flying colors.  There isn't a single flaw in this movie that I can point out. It seems like every movie Griffin had made before was pointing in this direction.

The Disco Exorcist is a brutal, blasphemous horror sex comedy drenched in the kind of 70's era Catholic fear, evoked as only a lapsed Catholic can. It is an example of what happens when every single member of your cast and crew are synced up on the same page and moving in the same direction. It is excruciatingly funny, genuinely harrowing at times and delivers on every promise that that killer trailer and excellent poster by Stephen Romano made. The Disco Exorcist is a howl from start to finish, loaded with nudity and dancing dangerously close to being classified a porn movie.