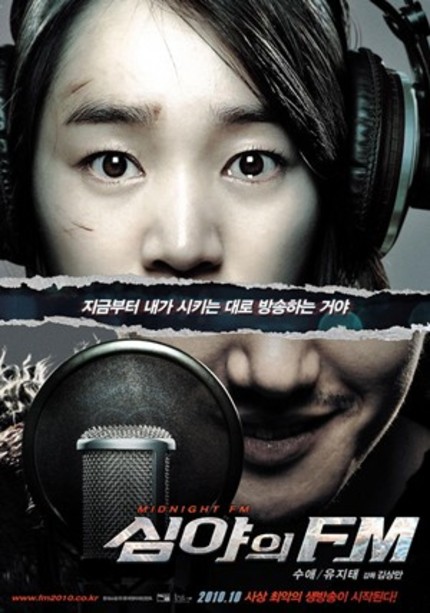 Even with the invention of proliferation of television, radio remains a relevant and fascinating medium. There are some excellent films about the power of the DJ voice, from Talk Radio to Pump Up the Volume to The Fisher King. Something about the disembodied voice allows the listener to imagine anything person they chose as the owner of that voice, and twist the words to their own ideals. Sang Man Kim's new thriller Midnight FM can easily be added not only to the radio film canon, but also to the slate of great thrillers being produced in recent years in South Korea. One of its greatest advantages is the use of a female protagonist, a heroine whom in the end must outwit the men who surround her and claim to be able to do a better job than she at catching a criminal.

Sun-Young has been the host of a popular late-night radio talk show for five years; but due to the illness of her daughter, she has decided to quit. One of her avid listeners is not happy about this, and decided to hold her daughter and sister captive in order to force Sun-Young to not only stay on the air. And to add to her terror, she can't tell her producers about the constant changes she is making to her schedule.

Jumping between Sun-Young in her studio and psycho fan Dong-soo in the apartment, as he raises the stakes to homicidal levels. He asks her to not only replay the song from her first show (easy enough to find out), but also to remember the exact words she spoke, and why she chose the song. The film goes beyond a standard thriller fare through its use of radio celebrity (as oppose to film or television). Radio is about communication with words, and a certain chemistry is formed between speaker and listener. Sun-Young's voice is soothing, seductive, and clever, and one can imagine a listener sitting in the dark, letting that voice be that of a kind of deity to them. The film also contracts vocal communication with silent, as Sun-Young's young daughter attempts to escape from Dong-soo, and must learn to interpret subtle signals. As well, another of Sun-Young's long-time fans is attempting to assist her, and while he seems to be benign, he is also clearly obsessed, and we are asked to question whether this is a more acceptable form of fandom, or possibly just as dangerous.

As the film moves away from the relationship between DJ and listener and more to the chase to catch Dong-soo, it loses some of its more interesting thematic explorations. But the film keeps the viewer on the edge of their seat, as Sun-Young, being the voice, is the only one who seems to understand how to interpret Dong-soo's communication and outwit him. At what point do we tire of listening, or speaking? Can one person make us understand the power of a single voice? How responsible can we be for how someone interprets our words?  Midnight FM handily investigates the power of radio and gives a thrilling ride.

Do you feel this content is inappropriate or infringes upon your rights? Click here to report it, or see our DMCA policy.
Sang Man KimHwi KimSoo AeJi-tae YuJoon-ha LeeDong-seok MaCrimeMysteryThriller