I AM NUMBER FOUR Review 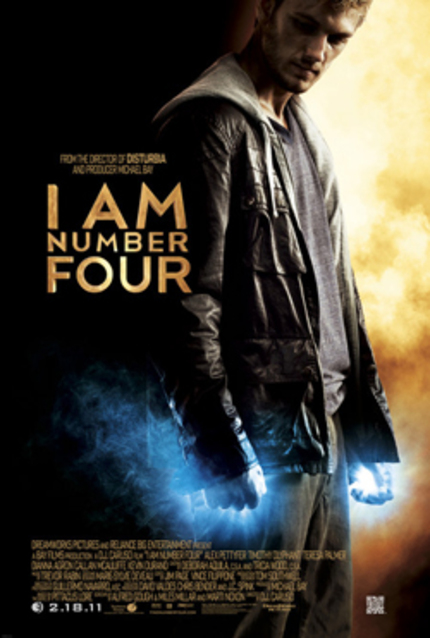 I can't say I was terribly excited to see I Am Number Four, the trailer was weak sauce and one hardly heard anything about it on the interwebs or anywhere else. What I did know was that it was produced by Michael Bay and that didn't exactly up the excitement level even though I can enjoy his over blown melodrama from time to time. I had only seen one other film by director D.J. Caruso, Eagle eye, which was fairly decent conspiracy thriller if I remember correctly so I thought this might at least be enjoyable to some extent.

John Smith, not his real name, is not the happy go lucky young stud that loves to ride jet skis and hang out with his hot young friends like he wants you to believe. No young John is an alien, one of the last 9 hot young refugees from a distant planet that has been raided by a race of tribal tattoo loving, thick bottom shoes wearing alien warriors who are on the hunt for those 9 special kids that have super human like powers. The evil warriors have already killed three of those aliens and now it's John's turn to bite the bullet so him and his guardian are on the run again, relocating to the small town of Paradise Ohio.

His guardian, Timothy Olyphant completely wasted in this role, has taught John all his life to stay low profile, not to get his picture taken and not to get too close to anybody, because that will get them both killed, but seeing that sort of stuff is such a hassle for a uppity youngster like John he joins the local school and five minutes later has caught the eye of the local hottie who just happens to be a photographic enthusiast. The idea that he's the last of his entire race doesn't seem to enter the picture because apparently he likes to torture himself by surrounding him with people that he will eventually have to leave.

Every movie school has to have a bully, a football playing jock bully to be exact who doesn't like the new kid and makes it perfectly clear pretty early on, especially when he notices that the object of his affection, the photo hottie, has an eye for the new kid in town. And of course there is the poor geek the bullies bully, quite horribly and openly, who John befriends and of course he has to have a past that somehow connects to Johns origin. And then there is the magic gecko that transforms in to a cute guardian dog of course. And while John frolics with his hot teen friends, the evil warrior aliens are closing in on him, apparently using Facebook to do so, and soon the final showdown is at hand.

What this film is is basically a super hero movie for the Twilight crowd and has almost exactly the same story but instead the focal point is on the stranger and not the girl who's at odds with her school. It's tailor made for young women to swoon over the handsome lead who's all brooding and hot at the same time. A selfish young man who seems to only think about his own needs rather than the future of his entire race of people in order to try and get some poon. The storyline is so incredibly forced, everything that happens is so conveniently connected to the plot that you can clearly see what is going to happen. But nothing really does happen for the first half of the film other than to set up two dimensional characters and recycled plot, unless you call watching the bad guys menacingly buying a shit load of turkey and scare a fat kid interesting and furthering the storyline.

I can see young women lose their shit over some aspects of the film but in the end I think this is the start and an end of a proposed franchise. The sci-fi aspect of the story isn't something that most women connect to I think, at least with the vampire aspect of Twilight you get the over used metaphor for sex and penetration of nubile young flesh and the chance to live forever with the love of your life. Here you have a guy, while incredibly handsome, has glowing hands and can beat the shit out of bullies. There isn't really anything overly romantic about that, unless you have a woman who is constantly being hassled by bullies and needs rescuing again and again.

The whole production feels like a TV show, and looking at the people behind the script it's easy to see why. I've got a feeling that this was initially pitched as a series but somehow got upgraded to feature film instead but lacks everything that should make for an exciting sci-fi action film. It's like nobody put much of an effort to get this on the silver screen, lackluster direction and flat acting, weak action and I've got a feeling that this will be forgotten soon enough. So for those looking for a good sci-fi/super hero action need to look elsewhere this isn't really worth your time.

I Am Number Four

More about I Am Number Four