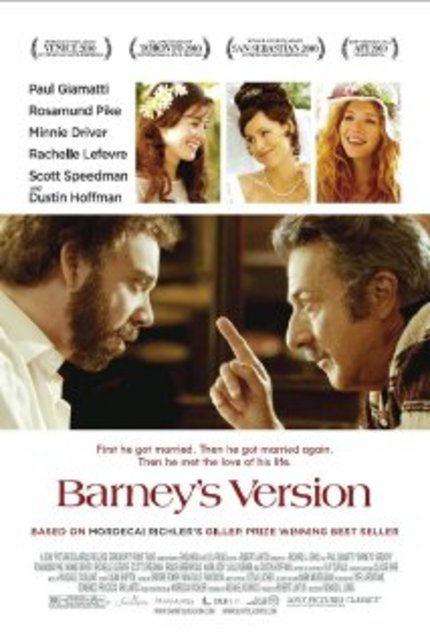 Recently, at the Golden Globe Awards, Paul Giamatti beat out such Hollywood luminaries as Johnny Depp and Kevin Spacey for Best Actor in a Comedic Role for his work in the little seen, little known "Barney's Version". Indeed, it is Giamatti's seemingly effortless, natural performance as the terminally self-centered yet somehow endearing Barney Panofsky that anchors the film. Yet as loopy as the Golden Globes can be (just who is this group that collectively agreed to give a nomination to Depp for "The Tourist", anyway?), this is one that they got right in the end. Giamatti's work in the dramatic comedy "Barney's Version" is yet another stroke of excellence in a spectacular career. Sadly though, Giamatti alone does not save the whole of "Barney's Version".
Although Giamatti (who is always reliably great) and Rosamund Pike (who is positively effervescent in her role of Barneys third wife and true love) are truly admirable here, "Barney's Version" is a highly uneven and overlong film. Director Richard L. Lewis has set out to tell a story both deeply human but also fused with twist-ending intrigue. The visual style, however, lacks a pulse and the pacing is blah and off-kilter. What we end up with is the film equivalent of a slightly healthier jumbo pretzel that is at first tasty, but quickly becomes too salty, too doughy.

The story spans the adult life of title-character Barney across multiple decades (the mid-1970s to modern day) and countries (Italy, Canada). The result is an ambitious and respectable near miss, his reach exceeding his cinematic grasp. Barney is a terminally selfish and shortsighted lout, but at least he has our attention. Over the course of the story, he is married three times, eventually settling in with the true love of his life (Pike).

"Barney's Version" takes the time to unpack the day-to-day flavor of most of these marriages, particularly the final one. The result is a feeling of narrative meandering, drawing too much attention to Lewis' intention to cover all the bases. (Let the naysayers of "Blue Valentine", who were critical of that film for focusing only on the relational highs and lows of its characters, take note.) The fact that all three of Barney's marriages are botched is not a spoiler, but rather an inevitability.

What is a surprise is that when the third and final union tragically dissolves, there is still a good half hour left in the film. This is where the previously-mentioned twist-ending takes over - something that is clearly supposed to alter, or at least re-color our perception of everything up until then. For me, it did not work, and served only as overworked padding. The film's overall point is clearly not the mechanics of the ending, but the life and times of the man himself. By dragging it out unnecessarily to eventually follow up on a weak murder mystery subplot, the feeling is that Lewis was making two different movies here.

I give the film reluctant thumbs down, since despite it's deal-breaking flaws, I must admit that yes, "Barney's Version" did affect me in several ways as it intended. I was moved, even as I was bored - a strange sensation. It is perhaps worthwhile for it's convincingly nostalgic look at hip & happenin' 1970s Italy, where Barney resides as younger man. Some will be entertained by Dustin Hoffman's subtly hammy supporting role as a Barney's father - a retired cop with a questionable record. Likewise, sharp-eyed viewers will be amused at filmmaker Atom Egoyan's cameo as a TV director working on the lousy program that Barney at one point produces. But in the end, any real credit goes to Giamatti and Pike, who give their all to realize Barney's story - a life as flawed as it is fully lived.

My good friend Robert Hornak has an excellent piece on the film's screenplay failings here: http://morethanonelesson.blogspot.com/2011/02/self-hating-hero-by-robert-hornak.html