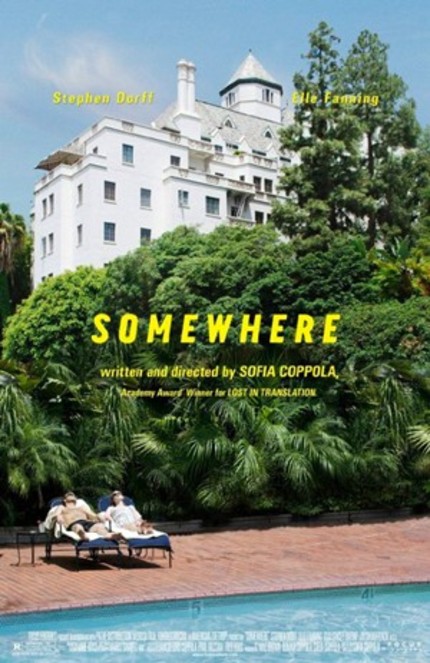 Stephen Dorff is a fan of Sofia Coppola. So much so that on a recent set visit Dorff spiralled completely off of what was meant to be the topic at hand and instead spent more than half of our allotted time talking about his experience with Coppola and the circumstances that led to his starring role in Somewhere.

This whole scenario was one that simply should not have worked. An actor literally five minutes removed from finishing his shoot on another project - he hadn't even changed out of costume yet - dropped into an interview scenario with a ludicrously large round table with fifteen or so journalists. It should have been a disaster but instead it turned into something special with Dorff clearly in a very open and giving frame of mind and the table of writers smart enough to realize what was happening, shut up and let the man talk.

With Somewhere soon to hit screens we present Dorff's comments on the film now.

Stephen Dorff: I did Somewhere last summer, last summer and fall. And then I just kind of sat for a while, I couldn't really find a movie that I liked. After working with Sofia I had a hard time finding anything that I found remotely as good. It's kind of the kiss of death. I told Sofia, "I hope we get to do another one," I said, "because it's very hard to get another one after I've worked with you because it was such an amazing experience."

Q: That's interesting to hear you say because you've been in the business for a few years ...

A: A few years? I've been in the business my whole life! I'm an old man!

Q: You've been through the ups and downs, the great parts and the not so great ones, and after doing something like Somewhere, to say you don't want to do anything else ...

A: She's the best, I think. She gave me the best part I've ever played. It was by far, especially in this time when there's less and less movies about real characters and original voices and directors who have original styles ... she's one of the only ones left, I think, and she's also one of the only ones who can get her movies green lit. It was by far the best experience I've ever had in my life.

I've made like thirty five movies and with the exception of maybe two or three I've always respected and liked the choices I've made, so I think now the best is to come. Much more opportunity. She gave me such a great opportunity that now all these other retards want to come and join the train. So great.

Q: Speaking of green lights, and people like Sofia being able to get movies green lit ... someone like Mary, who you've worked with before, Mary Harron ...

Q: Well, there was American Psycho and the Betty Page thing ...

A: The Betty Page thing wasn't that good.

Q: Yeah, that kind of put her away.

A: I loved that movie I did with her, I Shot Andy Warhol. Actually that was the movie that Francis, Sofia's dad, loved so much and started talking to me about Youth Without Youth, his movie. I was going to do that movie and in the end he went with Tim Roth and I was kind of upset because Tim's older than me and he wanted a European at the time. It was interesting because I've known Sofia almost my whole life and it was almost destined that I was going to work with Francis but I think in the end it all happened for a reason and a few years later to have gotten the chance to work with her on this specific film ...

Q: Why do you think that is?

Q: It seems like a lot of things are aligning for you and your career right now.

A: Well, I think maybe my mom has something to do with it. I lost my mom two years ago and it changed me. Changed my life. I was very sad and didn't want to act. Did a movie I produced with Val Kilmer called Felon, and that was an incredible experience, a film that got incredible reviews from the New York Times on down. Rolling Stone, Peter Travers. But it got a very bad release because I think Sony didn't realize what they had and they had timed the DVD release. We had all these reviews but it disappeared from theatres in three weeks. But then on DVD it became humongous with young people and street credibility. Every I go, everywhere, kids always say that's their favourite movie. And it was just this little movie we produced.

And I think that movie kind of set the tone for me wanting to do good things and really just do good work and not necessarily go for the paycheck. So I started not making any money. Which is hard because I like to spend a lot of money. And I decided to just get back into the directors, which is where I was in the beginning of my career. Just choosing directors and trying to get in front of them. To get their brain going. And hopefully get in there.

So Felon led me to Michael Mann and I did Public Enemies for six months with Johnny Depp, which was more of a character part for me but a great experience. Kind of crazy. But Michael Mann was great to work with and very challenging. And then from that I went in to ... what did I do after that ...

I was going to do another big movie after that and then I got a call out of nowhere that Sofia was making another movie. I was like, "What?" She hadn't made a movie in a while and I love Sofia. She's a friend. And I was told that I was on a short list and that I was in her mind for a part. So I asked "What's the movie about? Where's the script?" They said "There's no script yet but it's about you and a little girl." I said, "Fuck, I gotta get that movie."

It was the year anniversary of my mom's death coming up and I wasn't in a very good place. So ... It was Oscar week, and by this point she had sent me a script. And my agent said, "I think you should go to Paris and meet with Sofia. Just go. She wants you to come but rather than wait for them to get organized and invite you just call her and say you want to come." So I said okay. So I went to Paris.

That week we talked. Went to dinner. She was observing me. She hadn't told me I had the role. She was telling me little things, like "Don't cut your hair." Good things. But she hadn't really told me. By this point, after the sixth day ... I'm not the kind of guy who wants to sit around. Or force a director. If that director wants me and has me in their head then they're going to hire me. Otherwise there's nothing I can do.

Q: So you're sat in Paris just waiting.

A: So I sat in Paris, at my friend's house. And my agent was like "You're not leaving Paris until you get this part." And I said, "I'm going to leave. I'm going to tell her that I'm going to leave on Saturday. I'll tell her that if she needs me I'll stay longer but she also has a baby - a year and half old little girl - and I don't want to impose. She might need her time."

I was kind of going a little crazy. I texted her the night before, said "I can't really sleep, I can't stop thinking about this part. But I don't want to be a nag. So I'm heading out on Saturday but if you do need me, let me know." I didn't hear anything from her, I was starting to get worried.

The next morning I was with our mutual friend, Zoe Cassavetes. She's a very old friend of mine and best friends with Sofia. So I asked her, "Zoe, have you heard anything? It's kind of driving me crazy. I'm leaving tomorrow." She said, "I don't know but don't worry. Don't worry."

This was now the night time of the day that my mom passed. So it was very strange. I was in a hotel, on a balcony. The Eiffel Tower is right here. I was kind of sad. I talked to my dad. Emailed my brother. We were all in different parts of the world. Then my cell phone rang and I saw it was Sofia and my heart sank like, "Shit. I've gotten these calls before when it doesn't work out." So do I answer it or not answer it? Oh, fuck, I'll answer it. So I answer it and she says "I don't need to look any more, do you want to do my movie?" And I said "Yeah. Are you serious?" I told her I'd call her back. And the Eiffel Tower started going techno, like it does on the hour. It started going crazy for the next five minutes. I guess it's on the hour that it goes crazy.

And then I felt my mom for the first time in like a year. Not only did Sofia step up and offer me single handedly what I think is the best role for a young man in the last five years. Nothing compares to it at all. I've read everything. This is the best, I think. I kind of had a flood of emotion and started crying on the street. This Chinese lady comes up to me and asks if I'm okay. "Yeah, I'm happy! I'm crying because I'm happy!"

So I called Sofia back and we went out and had this amazing champagne and that was how I got that one.

Then I went home. I wanted to see my family. I wanted to go visit my mom. I had about three months before we started shooting. She wanted me to get pale and stay out of the sun, which is hard because I live at the beach. I was constantly wearing a hat. I got really pale and then we made the movie and it was single handedly the most poetic, amazing, relaxed creative environment I could have ever asked for. It was like nothing I have ever experienced. I have gotten used to the idea that not many movies will be like that again. And I asked her if she ever does another movie, if we work together again, I said "Please make it longer. Make it last longer." Because it was too short.
Sign-In to Vote
Tweet Post Submit