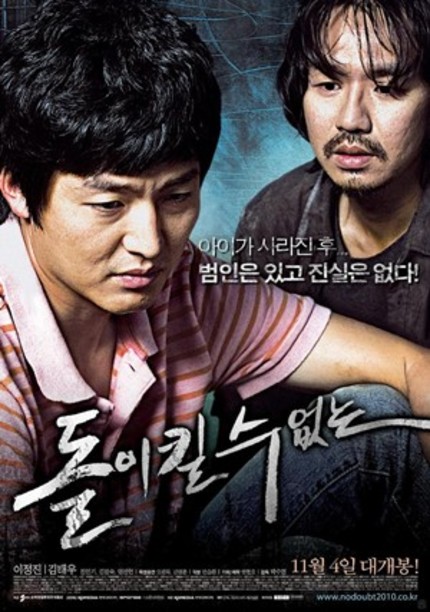 [Our thanks to Padrhig Harney for the following review.]

There is something brewing in Korean film industry this year. 5 films at Cannes and an abundance of new funding despite the global economic downturn might just mean that Korean cinema is back to its old form. With this Pusan International Film Festival's Korean Cinema Today section looked to portray a reflection on violence "No Doubt", "Boy", "The Man from Nowhere", "Moss", "Secret Reunion", and "Poetry" all deal with violent circumstances in Korean society. This violence can manifest itself in many different ways all rooted in these films within a community or family.

Of those half a dozen films there is an unusual kind of work in "No Doubt". The new film from Director Park Su-Yeong brings us a look at violence of the group, and how a community can destroy the individuality of one member completely alienating him from society. The film questions the very definition of violence. Not an ordinary thriller Park brings us a different idea and film that only the Korean film industry could have cultivated.

This is Park's fist taste of the Korean mainstream after a fairly quiet career with small projects that gathered minor festival buzz within the Asia. Here he works with Hong Sang-Soo regular Kim Tae-Woo, and veteran Jeong In-gi. Park utilizes these great actors to bring us close to the characters. Even if our point of view feels somewhat omniscient there is definitely still a bit of doubt, and like any good thriller the viewer is not privy to everyone's knowledge of the events that surround this story.

The only drawback of this film is the manner in which Park brings out his ideas. Many people find it hard to accept films that leave a bad taste in your mouth. Taking the viewer out of their comfort zone and forcing them to think about things that some believe are just better to be left alone. That being said however the films main strength lies in this. When a director manages to bring about these feelings then and only then can we be presented with their true vision. One thing for sure this film will not make you feel good, then again it will help you experience something and that is more than most mainstream films offer.

"No Doubt" will most likely flop at the box-office due to the subject matter. It's quite a shame to see directors that put themselves out on a limb like this fail, but the film industry is about dollars and cents just like any other endeavor. We will just have to wait and see if the Korean movie going populace will embrace this film or not.