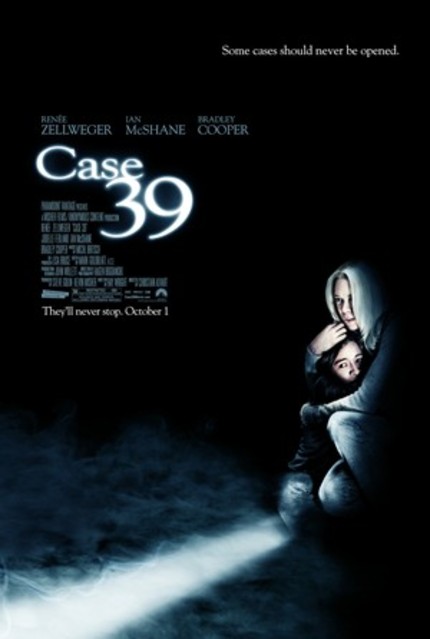 "Ludicrous thriller" may not sound like a compliment, but rest assured that in the case of Christian Alvart's CASE 39, released wide today in the US, it is both an accurate description and more than modest praise. Shelved for more than two years and thus unfairly assumed to be dreck, the film instead proves to be an intense drama that touches on the horrific before morphing into something else.

Coming in cold, without prior knowledge of the plot's twists and turns, it took me a while to figure out in what sub-genre the film belongs. Once that becomes clear, the plot's trajectory becomes more predictable. Even with full knowledge, however, I'd argue that Alvart's ability to steer the narrative through sharp, tight turns without slowing down gives the proceedings a giddy rush that overcomes the story's more ridiculous elements.

The opening sequences set the tone for a family abuse scenario. Emily Jenkins (Renee Zellweger) is a dedicated case worker in the child services division of a good-sized city in the Pacific Northwest. She's overwhelmed with work and is none too happy when her boss Wayne (Adrian Lester) adds one more file to the towering pile on her desk. She can't help opening the folder, though, and seeing the photograph of beguiling 10-year-old Lilly Sullivan (Jodelle Ferland) prompts her to follow-up the complaint promptly.

Lilly's grades have been steadily dropping and she's been sleeping in class. When Emily visits the family home, mother Margaret (Kerry O'Malley) and father Edward (Callum Keith Rennie) make for the kind of couple you hope don't have children; Margaret is uncommunicative and Edward whispers his replies to Emily's inquiries directly to his wife's ear. Then he fixes Emily with a fierce stare that's unnerving. Little Lilly looks lost and sad, trembling physically around her parents.

Emily is compelled to dig into the case, though Wayne reminds her that they can't do anything more without physical evidence of abuse. Her conviction that something is wrong makes her press further, imploring her detective friend Barron (Ian McShane) to intervene on behalf of the child. He kindly but firmly refuses; he's been down that road before and is understandably wary. Emily is not naive, but her experience tells her that Lilly is being abused, and the child's whispered confession of fear only ratchets up Emily's concerns.

Finally something terrible happens that exposes what's been happening in the Sullivan home. Emily is relieved at first, and then reluctantly allows herself to become involved further in the case on a more personal level, aided by Doug (Bradley Cooper), a child psychiatrist and her romantic interest.

From there on out, all bets are off.

Initially, CASE 39 appears to have lessons to teach about parents, children, and social workers, but at heart it's most interested in delivering genre thrills with just a touch of something ... other.

Alvart, who debuted with the haunting German-language serial killer flick ANTIBODIES, also made last year's 'horror in outer space' PANDORUM, and the trio of films he's made so far all share dark, moody atmospheres and an expert sense of pacing. CASE 39 and PANDORUM don't have the disturbing intelligence of ANTIBODIES, but neither are they huge steps back. CASE 39 is propulsive and exciting, a film that isn't ashamed to embrace its cliches.