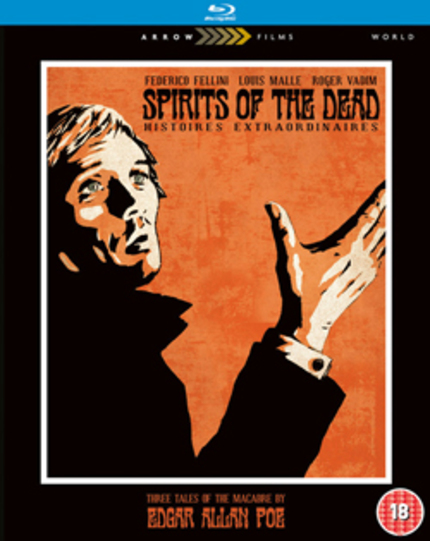 [Just updating to throw in the fact that movie enthusiasts worldwide can now pre-order this with confidence as Arrow Films have confirmed that the Blu-ray will be region free and able to be played in machines anywhere.  Go to it, guys!]

Today in their newsletter Arrow Films announced the upcoming release of the 1968 Poe anthology film Spirits of the Dead.  The film features vignettes from Roger Vadim (...And God Created Woman), Federico Fellini (8 1/2), and Louis Malle (Au revoir les enfants), and has never been seen on Blu-ray.  Here is the official word from Arrow:

Federico Fellini, Louis Malle and Roger Vadim adapt works by macabre author Edgar Allan Poe in the anthology film Spirits of the Dead [Histoires extraordinaires]. Dealing with tormented characters experiencing a personal hell, filled with angst and delirium, Spirits of the Dead was a ground-breaking departure for the adaption of Poe in cinema.

Vadim directs Jane Fonda as Countess Metzengerstein, a debauched heiress leading a life Caligula would commend. The Countess becomes tormented by the denial of her incestuous desire for her cousin Baron Berlifitzing (fittingly played by her brother Peter Fonda). Malle directs Alain Delon as William Wilson, an Austrian Solider who is haunted by his doppelgänger, tormenting him at times in his life where he is at his most cruel and sadistic. Fellini's famed segment sees Terence Stamp as a Toby Dammit, an actor arriving in Rome to meet the producers of his new film, the first Catholic Western. Drugged and drunk, Dammit is disturbed by the haunting image of the devil, which like Mario Bava's Kill, Baby... Kill! and Bunuel's Simon of the Desert, is actually a young girl, ominously bouncing a ball.

Spirits of the Dead is presented in a brand new transfer from a new High Definition restoration of the original film negative. Reinstating Terence Stamp's superb performance with his original English audio as well as alternate English audio options for Metzengerstein and William Wilson.

Spirits of the Dead is due to release on October 4th, and should be region free.

More about Spirits of the Dead

wow, this looks really cool, I'm finishing up a Poe project myself right now wish I had seen this before I started last year.