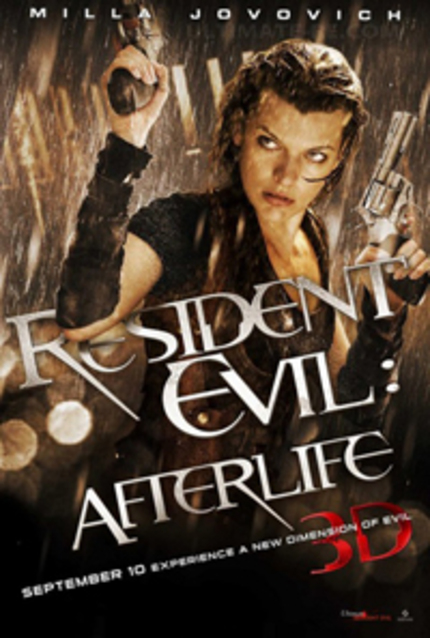 I don't believe in the term "guilty pleasure." At least, not with regard to movies. Maybe if you were a connoisseur of baby seal steaks or hoodies made from pandas, the attribution would be appropriate, but not when talking about one's taste in films. Take Paul W.S. Anderson's body of work--I'm kind of an easy lay when it comes to his Resident Evil films for reasons both concrete and maddeningly difficult to articulate. They're glossily shot with (at least with Anderson or as with RE: Extinction's Russel Mulchahey behind the camera) and promise at least a few engaging setpieces featuring series lead Milla Jovovich in some kind of improbable action, possibly kicking dogs in the face as her character Alice navigates whatever bizarre and occasionally goofy developments are thrown her way by the increasingly slapdash evil conspiracies at the heart of the series.

I love the series because at its heart, it's a great big silly (okay dumb, but sincere) bit of fun, obviously made for and by geeks (I don't mean this pejoratively) who are really into the games. Each entry promises some truly bizarre development for the subsequent sequel that never full materializes.

Case in point: after the opening shootout in an underground, Japanese facility operated by the Umbrella Corporation--the baddies who created the T-Virus and Alice's former employers--Afterlife quickly dispenses with the more interesting developments from the end of the last film and puts our heroine back on the trail of Claire (Ali Larter) and the remaining survivors from the last installment. With most of the Earth's population decimated by the zombie plague, survivors have been following an automated beacon to Alaska, where they're promised food, shelter, and most importantly, no zombies. Unfortunately, the life Alice is able to find at the site is a feral, dirty Claire, whose memories have been wiped thanks to an insect-like device embedded in her chest.

From there, Afterlife follows the duo as the look for the source of the beacon and any other survivors from the remaining group, ultimately ending up on the roof of a high-rise prison in L.A. where a band of Hollywood stereotypes have taken refuge from the horde of zombies below. I won't bother with their names because most of them are dead before you can commit their names to memory. One, however, is played by Prison Break's Wentworth Miller in a turn so mind-bogglingly contrived within a plot full of goofy contrivances, that for a moment I was convinced the script had finally resorted to going through the motions of checking off a list of character names and references from the games.

In fact, I'm increasingly coming to believe that the series has become an expensive fan-service delivery system, made almost exclusively for those who've played the games. Elements from the most recent titles in the "survival horror" game series are dropped into the story without rhyme or reason, but boy do they look cool. Why is there is hooded, nearly invulnerable mute giant with an axe trying to kill Alice, Claire, and the survivors? I can tell you he appeared in Resident Evil numbers 4 and 5, but I'd be hard-pressed to explain what the hell he's doing in this movie, and I'm pretty sure a short scene post-credits will leave most members of the audience scratching their heads.

From a production standpoint, I can report that someone, somewhere is at least getting their money's worth--for the most part. With the exception of the most unconvincing onscreen doubles since Hayley Mills starred alongside Hayley Mills in The Parent Trap, the effects work is generally pretty good. And although no one has apparently told Anderson that bullet time is a bit passe, his action scenes tend to be easy-to-follow and again, have the occasional just-bananas-enough moment to keep them bobbing along. The 3D process is there and works in the lowest common denominator way--you know, lots of shrapnel, glass, and in one of the film's most hilarious developments, blood-soaked quarters flying at the viewer. I never found it annoying, but there's no way it won't look cheap and feel shortsighted in the home release.

Special notice should be given to the often good to quite excellent score by TomandAndy, who've also done music for films as diverse as Killing Zoe and Alexandre Aja's The Hills Have Eyes remake. Most of it is throbbing electro-rock with copious amounts of distortion effect. It has the effect of classing up the joint, if you will, adding a layer of techno paranoia to some of the more outlandish moments in the movie. Marilyn Manson's score from the first film in the series was one of the most memorable elements of the franchise, particularly with its dissonant, out-of-left-field calypso theme that kind of makes sense when you realize that Day of the Dead did something similar and all of a sudden it works by comparison.

But then, that's Resident Evil for you: a few things to love in what should objectively be a series to hate.

The ending is pretty optimistic that a sequel is in the cards, and the series is the perfect mix of dumb and crazy to guarantee that I'll be there to see it.

Charles is a freelance writer and game industry professional. You can read more of his work at his blog, Monster In Your Veins.

Do you feel this content is inappropriate or infringes upon your rights? Click here to report it, or see our DMCA policy.
Paul W.S. AndersonMilla JovovichAli LarterKim CoatesShawn RobertsActionAdventureHorror