It's A Sign Of The Coming Apocalypse. The Trailer For Paul W.S. Anderson's RESIDENT EVIL: AFTERLIFE Is Looking Good. 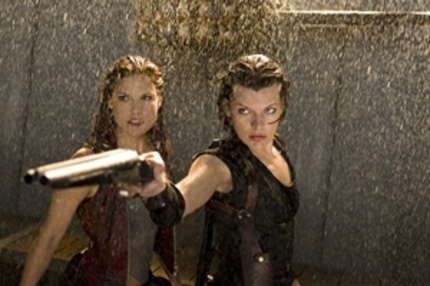 Wha?  Huh?  I do believe that one of the constants of the physical universe has just changed. Paul W.S. Anderson - purveryor of unrelentingly bad movies - has just released the trailer for his latest opus, Resident Evil: Afterlife, and - for two minutes at least - this looks stunning. Like really, really good. Like one of the best video game adaptations ever. Like I'm actually looking forward to seeing a Paul W.S. Anderson movie and that's the first time I've ever said that.

This one was shot on the same camera system used by James Cameron for Avatar here in Toronto. I got to visit the set a while back and one of the producers dropped a scrap of info about - apparently - an underwater sequence. Yes, kids. Underwater zombies. In 3D. They're not in the trailer and their presence is not officially confirmed anywhere but I'm willing to put a bit of money down that they're in the film.
Tweet Post Submit

Do you feel this content is inappropriate or infringes upon your rights? Click here to report it, or see our DMCA policy.
Paul W.S. AndersonMilla JovovichAli LarterKim CoatesShawn RobertsActionAdventureHorror