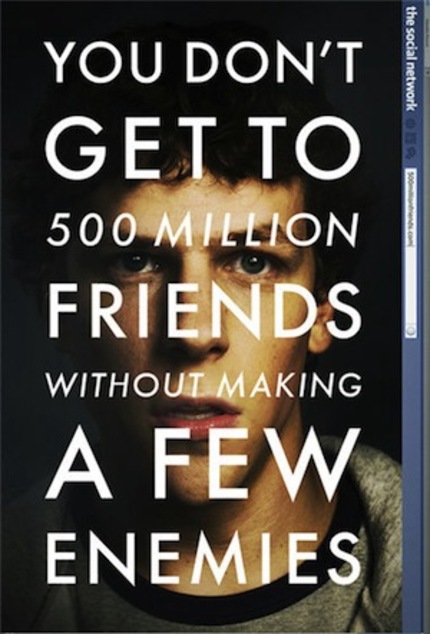 All right, so I'm a hypocrite: whenever I see the phrase "hugely entertaining" in a movie review I cringe, and yet those are exactly the words that occurred to me about halfway through David Fincher's new film... which, in case you've been impervious to all the hype (and good for you if you have), is a kind of modified biopic of Facebook co-founder Mark Zuckerberg.

One of the many reasons I dislike the "hugely entertaining" descriptor is that I don't know exactly what it means. Entertaining to whom? And why? It seems to presume that whatever makes the critic sit there in the dark with a stupid grin is bound to have the same effect on everyone else.

That said, The Social Network works so well as a movie precisely because of how, whether calculated or not, it aims for a brand of entertainment that is at once comforting (even nostalgic) and excitingly new (even edgy). In this respect the film represents a triumph of producing more than anything else, as Scott Rudin and company have brought together talents that one wouldn't necessarily expect to mesh... but they do, often spectacularly so.

The end result is a satisfying mix of the familiar and the contemporary, a combo that's going to win accolades from diverse audiences, and, in the process, push The Social Network to the head of the line when it comes to industry awards. Its narrative backbone is a traditional, if unconventional, rise-to-power drama whose rough outline one could see easily taking place in a completely different era and involving "old media". Yet the content poured on top of this structure feels so new that the film barely registers as a period piece--and maybe it isn't really, because in some sense we're all still living in the Age of Facebook. To be clear, the film doesn't overtly or conspicuously seek to paint a historical portrait, to "capture the zeitgeist" (which almost always feels forced and annoying), but manages to do so anyway. It's just too busy having fun and trying to drag us into the party.

If one wanted to indulge in comparisons, it might be best to think of the rather humorless Citizen Kane being wedded to the impressive ensemble acting and delicious zingers of All About Eve. Big names to drop, I know. To be sure, The Social Network probably lacks the gravitas and/or the formal innovation that would cause folks to place it on par with such all-time classics, but there should be little doubt that it belongs with the best of what Hollywood has to offer us at the moment. Of course there are many other antecedents that the average film buff can probably identify for The Social Network. At the NYFF press conference writer Aaron Sorkin referenced Rashomon, and Fincher seemed to concur. So if that was a conscious source of inspiration, who am I to argue? Since the story unfolds as flashbacks presented as depositions given in two different legal proceedings, sure, citing Kurosawa makes sense.

In Rashomon, however, the different stories were radically incompatible with each other so that, as every Film 101 student knows, we eventually question the nature of "truth" (or "reality") itself, coming to appreciate instead its constructed nature. The Social Network, by contrast, isn't about trying to puzzle out "what really happened"--rather, it represents an impressive case of making-do with the contradictions of multiple conflicting accounts. Yes, the script is based on a book by Ben Mezrich, but where nonfiction can bob and weave enough to draw a reasonably believable composite picture, occasionally pointing out its own limitations, a feature-length dramatic film can't get away with that much: in the middle of a reality-based drama, you don't want the audience to question the reality part too much or else you lose part of the spell that the picture casts. That's why what Sorkin and Fincher have achieved here is subtly impressive beyond it obvious impressiveness:  The Social Network stitches together a lot of gray area material to fashion a product that is anything but gray. Some might criticize it, like any docudrama, for its lack of faithfulness to the facts, but I'm not acquainted with the historical sources, so I can't comment directly. The sharpness that I'm so amazed that the creative team pulled off doesn't relate to veracity at all, but rather to how the script refuses to take sides yet remains compelling.

All of this praise, by the way, surprises me most of all since I'm hardly an Aaron Sorkin fan. But credit where it's due, he has crafted the wittiest mainstream movie I've seen in a long, long time, his dialogue moving between the kind of memorably aphoristic turns of phrase one expects from a topshelf stage comedy and the effortlessly clever and "hip" wisecracks of Joss Whedon at his best. Still, all of the script's great one-liners would remain dead on the page if it weren't for the terrific comic timing of the cast. Kudos to lead Jesse Eisenberg and the rest of the headliners, but even the secondary or tertiary characters get a chance to shine, the script is that generous. That also happens to be another reason The Social Network harkens back to Golden Age Hollywood--we might not admire most of the characters, but we enjoy being around them since they're all smart or funny, or both, the script in effect creating an alternate universe we want to visit because it's a place where everyone always knows exactly the right thing to say.

So while one expects Fincher to excel at the layered, complex storytelling from his work in Fight Club and Zodiac, it's all the sparkling dialogue and effective character development where he really surprises. Is The Social Network a perfect film? Far from it. Its high-energy and intelligence mask a lot of dramatic shortcuts--seams in a fabric that the screenplay tries to present as seamless. Intellectual epiphanies come to Zuckerberg in lightning bolts, and characters signal their immediate feelings for each other in a way that suggests that few relationships evolve over time. In one scene Andrew Garfield's character engages in a crucial phone call while his unhinged girlfriend starts a fire in the background, and that's just one example of condensation and efficiency that may be too smart for its own good. You do too much of that and you've created the typically glib and artificial Hollywood drama. Such devices are perhaps holdovers from Sorkin's long stint in television, where coincidence and similar impurities of plot help move hour-long episodes along.

Well, certainly there's much, much more that could be said about The Social Network, and that's one of the nice things about the film. It keeps one laughing and prompts immediate responses on several fronts--which I guess is the category under which these quick impressions of mine belong. But The Social Network is also bound to trigger countless animated, post-movie coffee shop discussions among those who see it. And that kind of bringing together, of connection and creative give-and-take, is both ironic and fitting, given that it's a film about a man who doesn't seem to connect well with anyone... and yet who built one of the mightiest forms of mass connection our culture has known to date.