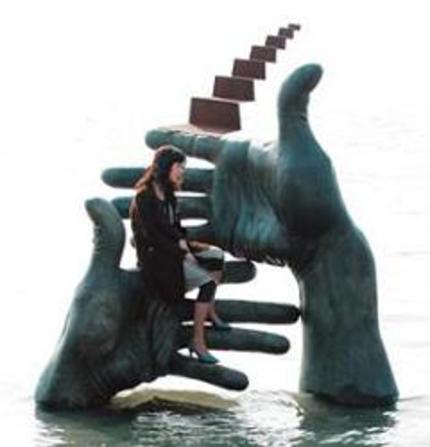 Kim Ki-Duk's Time is an emotional slap in the face. It's confrontational, daring, passionate, but also clumsy, reductive and juvenile. The director obviously badly wanted to offer some kind of reasoned, thought-provoking commentary on how people drift in and out of love, or how our fear of change affects how we treat the people we care about, but only brief glimpses of his message make it through the melodrama and the shock tactics.

Time is the story of a couple, Ji-Woo and Seh-Hee. They've been together for a while, and Seh-Hee's feeling the strain. She's worried he's lost interest in their relationship, that his eyeing up other women means it's them he sees when he thinks of her, and all his protests to the contrary can't seem to ease her distress.

If he wants another woman, surely she can become someone else? If he's so bored of what he sees night after night, surely a new face will bring back the spark? But Seh-Hee can't leave it at simply changing the way she looks, and things rapidly grow more complicated than she planned for.

This could have worked as an examination of how lightly people treat the concept of radical plastic surgery, or a broader cautionary tale about how we retain some intangible part of our psyche no matter how we alter our appearance. But Time wants to be both, and this is its undoing.

There are obvious nods to Korea's image-conscious celebrity culture (maybe not so different from the rest of the world, but there's arguably no equivalent to the double-eyelid procedure in the West). Kim touches on body horror, opening with fairly graphic images of actual cosmetic surgery. He shows the various other women who frighten Seh-Hee as far more conventionally beautiful than actress Park Ji-Yeon.

Yet Time is clearly myth-making, too. The film is laden with symbolism, most of it crushingly obvious. The park where the protagonists repeatedly meet is littered with sculptures of the human form, most of them sexual. Ji-Woo works as a photographer. His encounters with women aside from Seh-Hee revolve largely around lust and intoxication.

Try as he might, Kim simply can't make these two aspects of the narrative click. The intimacy of the blood-spattered opening footage implies the film is very much concerned with the real physical and emotional cost of these operations, but given the way the story plays out it doesn't feel as if the two leads are remotely connected with reality.

To be blunt, Seh-Hee doesn't seem distressed so much as outright mentally ill. She leaps on Ji-Woo's every shortcoming, real or imagined, and draws a worrying satisfaction from exerting control over him, both physical and mental. She doesn't react angrily as much as launch into full-blown hysteria at each and every provocation.

Perhaps Kim thought he was supporting some kind of female empowerment in showing how women would like to express themselves, plagued by these specific fears, but it doesn't come off as any such thing. It's near impossible to credit Seh-Hee's behaviour as in any way reasonable or sympathetic.

It doesn't seem especially plausible her insecurities have only now come up so by extension the idea Ji-Woo would have stayed with her for any length of time - or would want to stay with her any longer - feels equally ludicrous.

Kim seems at least partly aware of the potential disconnect between the immediacy of his hand-held camera and the theatrical melodrama the plotting descends into, but other than one or two throwaway winks to the audience he doesn't seem to have done much to mitigate it. The film feels more like a quick experiment, one where Kim was determined to see it through regardless of how well it was working.

His talent is still clearly evident. Kim frequently achieves the kind of gorgeous, impromptu tableaux that look so effortless they could reduce other directors to tears of frustration. But Time doesn't convince as a fable; it never even begins to sell the idea all men and women are drawn to each other out of terrified, co-dependent rage.

Fans of the director will doubtless lap it up; few, if any other filmmakers could ever have produced this. But it's simply been done better many times over. Kim himself went on to turn out a much more successful chamber piece one year later in Breath, which delves into far more affecting ideas about love, devotion and mortality, with better structure and greater resonance. Time is a curiosity in comparison, a fascinating misfire, but not really worth watching except to try and ascertain how it went wrong.

Palisades Tartan's UK DVD of Time is arguably much better than the film deserves. The image is surprisingly good given the film's hand-held video presentation, pleasingly sharp with a fair amount of definition and little if any blocking. Colours seem mildly over-saturated, but again, much richer than might be expected.

The original two minute Korean trailer portrays the film as massively more restrained than it actually is. The one substantial extra is a surprising inclusion - a forty-five minute Making Of. This is largely just a camera watching filming in progress and preparation beforehand, though it captures some fascinating shots such as the sculptures in the 'park' being set up, and the sheer amount of crew members behind even the simplest scenes. Removable English subtitles are also included for the majority of the spoken dialogue in the Making Of.

Time clearly means well, and it's obviously been made with compassion and an emotional impetus which makes it laudably distinctive in the same way most of Kim Ki-Duk's films are. But it's hard to think of it as anything but a misfire, swamped by hysterical over-emoting that can't in all honesty be called believably human. For fans of the director, or anyone who wants to make up their own mind, Palisades Tartan's UK DVD is an excellent way to experience the film - but it's difficult to recommend that anyone should.

(Thanks go to Palisades Tartan for facilitating this review.)

Do you feel this content is inappropriate or infringes upon your rights? Click here to report it, or see our DMCA policy.
Ki-duk KimJung-woo HaJi-Yeon ParkJun-yeong JangGyu-Woon JungDramaMysteryRomance