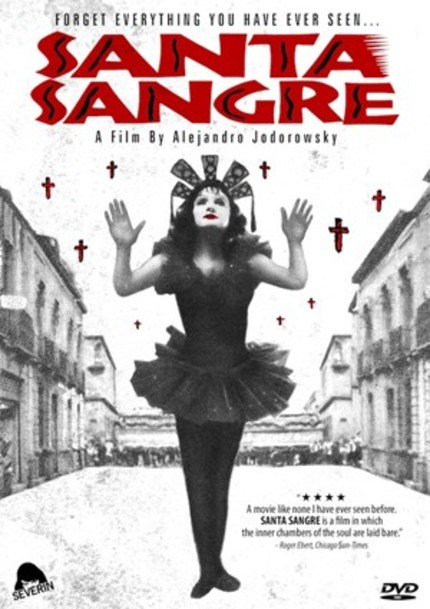 God bless the good folk at Severin, where they're not only finding and releasing an impressive slate of cult classics they're also releasing them well. And coming soon - January of 2011, to be precise - they'll be bringing legendary cult director Alejandro Jodorowsky's Santa Sangre, complete and uncut, to both DVD and BluRay.

Events For 1/25/2011 Release Of Alejandro Jodorowsky's Modern Masterpiece Include 5 Hours Of Extras, Retrospective At NYC's Museum Of Art & Design

LOS ANGELES, CA, September 20, 2010 - Severin Films today announced the 1/25/2011 release of Alejandro Jodorowsky's internationally acclaimed SANTA SANGRE. The 1989 production, rarely seen since its U.S. theatrical release, comes to Blu-ray and DVD featuring a restored print of the film's European version as well as over 5 hours of Bonus Material.  In addition, Jodorowsky will by honored by The Museum Of Art & Design with his first-ever American retrospective. The series, called 'Blood into Gold: the Cinematic Alchemy of Alejandro Jodorowsky', runs from September 23rd thru October 8th and will feature the 81-year-old Chilean-born filmmaker/playwright/graphic artist/shaman in attendance to conduct a rare master class on his films and philosophy.

Jodorowsky exploded onto the international scene with his 1970s sensations EL TOPO and HOLY MOUNTAIN. Endorsed by John Lennon and embraced by underground culture worldwide, the films redefined movies as both art and entertainment while single-handedly creating the 'midnight movie' genre. Legal frustrations with the films' owner (and Beatles' manager) Allen Klein, as well as a failed attempt to direct a 14-hour movie adaptation of Dune starring Orson Welles and Salvador Dali, kept Jodorowsky from making films for 16 years until his triumphant return with SANTA SANGRE. Blanca Guerra, Guy Stockwell and the filmmaker's sons Axel and Adan Jodorowsky star in this surreal epic about a young circus performer, the crime of passion that shatters his soul, and the macabre journey back to the world of his armless mother and deaf-mute lover. "This is a movie like none I have seen before," wrote Roger Ebert in his original four-star review, "a wild kaleidoscope of images and outrages, a collision between Freud and Fellini. It contains blood and glory, saints and circuses, and unspeakable secrets of the night. And it is all wrapped up in a flamboyant parade of bold, odd, striking imagery, with Alejandro Jodorowsky as the ringmaster. SANTA SANGRE is a movie in which the inner chambers of the soul are laid bare."

Bonus Features on the Blu-ray and two-disc DVD include deleted scenes, domestic and international trailers, an audio commentary with Jodorowsky, multiple documentaries, new on-camera interviews with the majority of the film's cast and crew, and coverage of Jodorowsky's forthcoming NYC appearances. A complete list of Extras, as well as preview clips, will be posted in the coming days at SantaSangreFilm.com.

"SANTA SANGRE is a landmark acquisition for us," says David Gregory, co-founder and CEO of Severin Films. "Jodorowsky is one of the few true visionaries of cinema, and the opportunity to bring his modern masterpiece back to America is a genuine honor. Our restoration of the film, combined with an unprecedented collection of Bonus Features, will now introduce this brilliant film to a whole new audience."