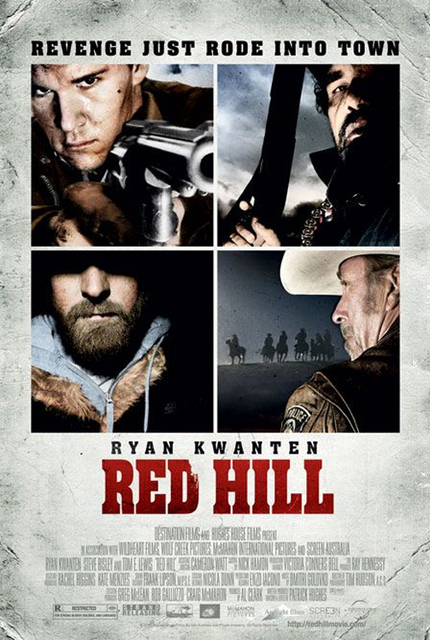 Do you miss old school revenge westerns and vintage gritty cop thrillers like I do? Where are the new High Plains Drifter's, or the modern day Report To The Commissioner's? Well pine no more, because Australian writer/director Patrick Hughes is riding over the hill, guns blazing, and lights flashing to save the day with his debut feature, Red Hill.

Shane Cooper (True Blood's Ryan Kwanten) is a kinder, gentler law enforcement official, whose reticence to use violence got him a bullet wound from a violent urban youth. Loving husband and father-to-be, he and his pregnant wife relocate from the turmoil of the big city to the small rural community of Red Hill, where they hope to raise their unborn son under the wide open sky of God's country. Cooper's first day on the job is a fiasco, starting bad when he can't find his gun, to worse when he is grilled and mad dogged by his superior, grizzled sheriff Old Bill (Steve Bisley, aka "Goose" from Mad Max), and other members of the small force he is to serve on. The young constable's first day is about to get a lot worse though. It becomes a bloody nightmare , because Red Hill's most feared citizen, the burned and disfigured Jimmy Conner (The Proposition's Tommy Lewis) is "coming back to town...and he's bringing Hell with him." Who is this silent Angel of Death in a trench-coat? Why are Red Hill's police force unwilling to phone in for back-up when Conner, shotgun in hand, starts systematically blowing them all to oblivion?

All will be revealed in time friends.

Commercial director Patrick Hughes bursts into feature films in a massive way with this mash-up of brutal style western and grimy police action thriller. Hearkening back to films like the aforementioned High Plains Drifter and Report To The Commissioner, factor in other titles like Chato's Land, The Chant Of Jimmy Blacksmith, Buck And The Preacher, Straw Dogs, and White Line Fever, and you are in the neighborhood. If you miss bad ass old school style shoot 'em up's, with solid characters and stocked with actors that actually look like real people, Red Hill is definitely for you. Hughes shares the sensibilities of countryman and fellow director Peter Weir, as well as other greats like Sam Peckinpah, John Ford, and Don Siegel while also updating the style and bringing his own spin to the violent mythologies laid down by the greats before him.

Ryan Kwanten, currently setting hearts on fire as Jason Stackhouse in HBO phenom True Blood, gets a chance to flex some more serious acting muscles as the fish out of water officer Cooper. Mistaking his nice guy qualities as being soft, the old boy regime of cops in Red Hill learn might frickin' quick that he's willing to back up his sense of justice with a bullet if need be. The cool thing about Kwanten's character too is he doesn't use a gun so much as his brain to smack down the guilty with the long arm of the law. Kwanten, while bringing the action, also displays a likability and sensitivity too rare in action films. Some of the best scenes in the film are the quiet ones shared between Cooper and his wife Alice (Claire van der Boom, also seen in the awesome Aussie neo-noir The Square), adding layers that elevate Red Hill into something more engaging than usual.

Character actors like Steve Bisley, Richard Sutherland, Ken Radley, and
the unmistakable Tommy Lewis help bring Red Hill to life. The wonderful cinematography of Tim Hudson captures the sprawling beauty of the Australian countryside with shots that would make John Ford proud. This film is a full on Aussie Shotgun Gothic.

A jewel in the already amazing programming here at Fantastic Fest 2010, I was left pretty stunned, and wanting another fix as soon as the credits started to crawl. Luckily this is the beginning of a thematic trilogy, so Patrick Hughes is just getting started. As a film geek and now a total convert, I'll be counting the days until he has another film in the can.

Sony has picked up Red Hill for theatrical distribution and is set to hit US theaters on November the 5'th. Do yourselves a favor, get your ass into a seat. This movie deserves and needs to be seen by discerning action and western fans.

Do you feel this content is inappropriate or infringes upon your rights? Click here to report it, or see our DMCA policy.
Patrick HughesRyan KwantenSteve BisleyTommy LewisClaire van der BoomThrillerWestern