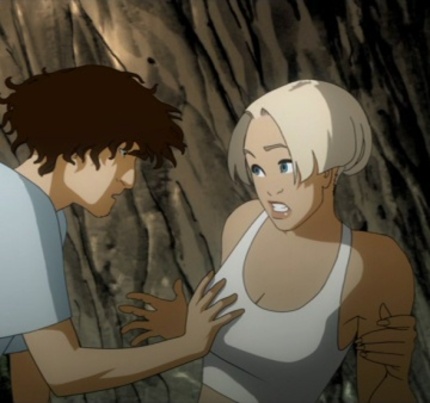 (Sure it's a "Ghost in the Shell" clone but it's also funny, hip and with a uniquely European slant!)


This year at Fantasia the Jury Prize for animation went to "Mai, Mai Miracle". However, the Audience Prize went to "Summer Wars" instead with a Runner-Up award for "Technotise: Edit and I", a low budget cyberpunk-SF film from Serbia.

Wait, what was that last one? From where?

Serbian cinema is kicking ass and taking names these days, with truly excellent films like "Tears for Sale" stunning audiences worldwide while epically controversial films like "A Serbian Film" and "Life and Death of a Porno gang" keep being the talk of festivals. As such, I probably shouldn't be too surprised when the Serbian film industry serves up something I really, really like, but I'll be damned if this didn't hit me out of left field: an animated science fiction film strongly influenced by anime and cyberpunk!
I only saw this film because it was recommended to me by fellow ScreenAnarchists Peter Cornelissen who told me this would be right up my alley, and he was right!

So I bought the Serbian DVD which happens to be English-friendly, and here is my review.

Belgrade, 2074. When young college student Edit keeps failing the same exam, she decides to cheat by illegally attaching a memory chip to her nervous system. The plan works and Edit passes the test, but when she accidentally sees a secret mathematical formula which causes machines to become self-aware, her chip becomes infected.

Its work done, Edit quickly has the chip removed from her but soon she discovers weird changes in herself. Her reflexes, talents and strength improve, she suddenly likes foodstuffs with lots of iron in it and she keeps having hallucinations featuring a guy with a very dry sense of humor...
Something seems to be growing inside Edit, copying and improving parts of her body and influencing her senses.

At the same time, a big electronics company tries to build a new kind of supercomputer, one powerful enough to be able to predict the future. When their research department learns about what's happening to Edit they get VERY interested in her...

Comicbook writer Aleksa Gajic wrote and directed "Technotise" as an adaptation of his own graphic novels. This means that despite using five different animation techniques in the same movie, there is still a single creative brain behind it. It makes the film surprisingly consistent, even though the animation itself sometimes isn't.

It helps that Gajic obviously knows what he's doing and is not just drowning everything in senseless polish. So while you see traditional animation, cgi, detailed matte paintings and what looks like psychedelic Flash animation mixed through each other, there is a definite sense of "different tools for different purposes". Old buildings are lovingly hand-drawn in great detail and shown in pans, while modern concrete lends itself for cgi-chase scenes where all perspective moves with the camera. "Technotise" may be a jumble but it sure isn't an ugly one.

And with his background in graphic novels Aleksa Gajic sure shows he has an eye for visual composition. Taking screenshots for this article was a pleasure, as you can almost pause the movie at any random point and come up with a watchable still.
Seriously, I had to restrain myself not to add twenty more stills to this review just for the hell of it.

The story itself will probably not blow your mind if you've ever read any Shirow Masamune or William Gibson. More unique is Edit's circle of friends, or rather their role in the film. In the beginning both Edit and her acquaintances all seem pretty but vapid, and solely based on stereotypes: the slacker, the jock, the drug dealer, the trendy girlfriend, the horny nerd etcetera. But when the shit hits the fan, these people turn out to be surprisingly loyal to each other and although each character gets a few scenes pointing out his adolescent behavior, the group also provides the movie with... well, a heart.

Also impressive is the description of the Serbian capital Belgrade in 2074. Instead of just showing a completely modern city, parts of it look contemporary if weathered. And instead of showing the Serbia of the future to be a dystopia, "Technotise: Edit and I" takes place in a slightly corrupt utopia. Life seems pleasant enough for most people: the environment doesn't seem energy-starved, overcrowded or polluted, everyone drowns in gadgets and cheap robots do most of the dirty work for you (including applying for an exam).
But with a corporate-controlled government you need an extra bit of money, influence or (if you're pretty enough) sex to make sure you get your due. And while the film doesn't feature any truly vile and evil people, everyone is morally compromised to a degree. Edit definitely included.

It all makes for an interesting mix. Aleksa Gajic juggles his low budget impressively but cannot (or doesn't want to) bowl over the audience with large-scale spectacle. Nevertheless his movie is never boring and always fun to watch. It kicks ass in places, is funny in places and is damn sexy in places. Summing up the film I keep coming back to the same two words: fun and cool.

While "Technotise: Edit and I" may not feature the most original storyline or the most stunning artwork, its combination of cyberpunk anime and European comic styles is pretty unique and always pleasant to watch.
In short: the film is a lot of FUN, and I truly enjoyed myself a lot more than I expected. In even shorter: check this out. Highly recommended!

"Technotise: Edit and I" was released in Serbia on a regionfree PAL disc which is English-friendly both in menus and main content. Packaging is as minimal as you can get: a disc in a single slimpack. Not that I mind, by the way: if packaging is not special, I actually appreciate it if it doesn't take up too much space.

More important is the AV-quality, and damn! Those Serbs sure do know how to put good AV on their DVDs. Crisp, clean and colorful, the "Technotise: Edit and I" disc has one of the best transfers I have seen this year on this format. Audio also gets well served here with a Serbian Dolby 5.1 track with optional English subtitles. These aren't exactly faultless (English verb grammar being the Achilles' heel here) but neither are they distractingly bad.

Next we get the extras, and there are some nice goodies on this disc. 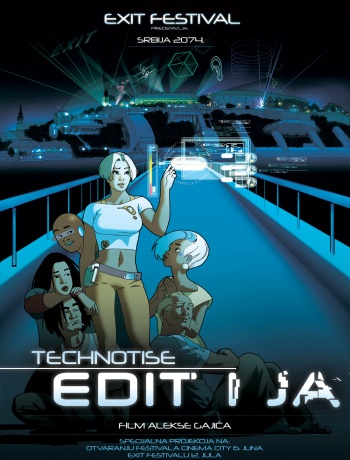 For starters we have the isolated soundtrack which is nice to have. It's even an extended edition of the soundtrack, as the tracklist also shows alternate versions and some separate songs which were affiliated with the film during its theatrical release. It also includes three music videos of popsongs which were either used for the soundtrack or which used footage from the film. So if you like the soundtrack this disc really caters for you.

Finally we have a 25 minute Making-of documentary. Unfortunately this one is not subtitled and that is a shame, because the doc is a good one and flamboyantly made. Lots of artwork is shown (both preliminary and what was actually used in the film), major contributors get to explain what exactly they did in each of the different animation styles and the whole team just seems to be pretty barmy. Watch the interviews with Aleksa Gajic at the waterside, if only to see what happens behind him (boats speed up suddenly, a submarine telescope examines the camera).


All in all this is a very nice DVD, pretty cheap with great AV quality. If you liked the film, this disc is definitely sufficient.

More about Technotise: Edit & I