SCOTT PILGRIM VS. THE WORLD review 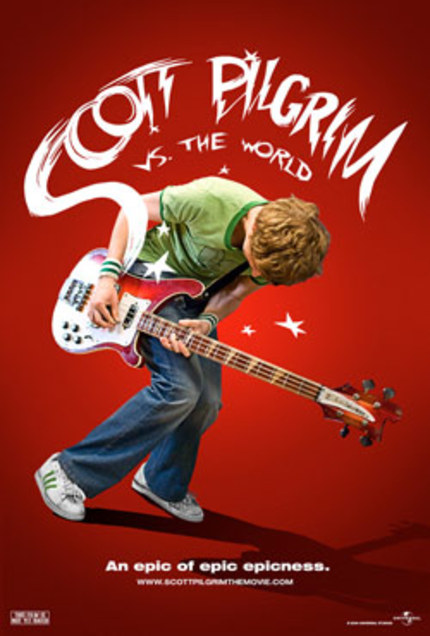 To blatantly hijack the words of Kurt Vonnegut, Scott Pilgrim has come unstuck in pop culture. Well, maybe not so much "pop culture", in that Quentin Tarantino/Cameron Crowe kind of way, but for lack of any better term, "junk culture". You know: video games, rock n' roll, comic books - all of the dominant popular culture mediums that elitist snobs love to consider disposable at best, garbage at worst, and whether they'd ever admit it out loud, they consider to be the lowest-of-the-low when it comes to creative endeavors.

For the twenty-something target audience for Bryan Lee O'Malley's "Scott Pilgrim" graphic novels (six gloriously hip, cartoony black and white volumes published by Oni Press), the interwoven nature of junk culture into the fabric of their lives is vital, neutral, and whole-heartedly unquestioned. This is a movie that speaks that language like no other. "Scott Pilgrim" is a vibrant comedy with rare visual spark, not to mention out-and-out visceral bravado, allowing the characters not to merely reference the cultural factors of their lives, but actually live in it, and seamlessly be one with it. On-screen statistic boxes pop up when a new character walks into frame. ("Scott Pilgrim/23 Years Old/Rating: Awesome") The contents of Scott's apartment, what belongings are his and what is his roommate's, are spelled out via moving "ownership diagrams". ("Lame Poster [Scott], Wall Lamp [Wallace], Easy Chair [Wallace], etc.) And when nutso video game/comic book style battles break out, there's plenty of on-screen sound effect bursts ("Kpok!" "Swok!") and even scores, stats, and deep-voiced, over-modulated narration. Not since the unfairly maligned 2008 gem "Speed Racer" have we seen a major studio film resembling anything such as this at the multiplex.

While the overbearing context may be disposable junk culture - that which is deemed so essential in the lives of typical Western twenty-somethings - the content of the story is timeless: young love. (Awww!) And while it's impossible to separate the deeply interwoven hyperactive aesthetics of video games and comics from the age-old boy-meets-girl/boy-loses-girl (etc.) story that it truly is, "Scott Pilgrim Vs. The World" is, at its core, a supremely entertaining comedic take on the age-old pursuit of young love. That is to say, even if you are not single or currently in your twenties, you can and most likely will absolutely relate to Our Hero, Scott. His world may seem newfangled, loud, and hyper at times, but none of that forsakes the necessary emotional longing and character-driven subtleties required to make this a truly universal tale. ("Universal". Get it??)

In the film, chronically dim and detached twenty-three year old Scott Pilgrim (Michael Cera) has reluctantly settled for a mundane relationship with an adoring high school girl, Knives Chau (Ellen Wong). But Scott can't ditch Knives soon enough when he becomes obsessed with the aloof and mysterious new purple-haired girl in town, Ramona Flowers (Mary Elizabeth Winstead). When he finally gets up the nerve to deal with Knives and wins the heart of Ramona (not necessarily in that order), he is informed that he must defeat her seven evil exes in combat. What follows in a string of hilariously over the top video game/comic book slugfests, each one defying the rules of physics and nature in their own wacky ways. And even while battle fatigue does threaten the audience by the end, the film remains fresh, vibrant and solid throughout.

"Scott Pilgrim" is an ideal example of the perfect talent coming together at the perfect points in their careers to create something unique to a particular time and place. Prominent rising star Michael Cera, who is at his best when doing self-aware smart comedy ("Arrested Development", "Youth in Revolt"), is of perfect age and ability to carry this film as the semi-dim yet loveable lead. But make no mistake; the true star of the show is director Edgar Wright ("Shaun of the Dead", "Hot Fuzz") (like I had to tell you!), who takes this opportunity to push his previously established smash-cutting visual precision to an entirely new level. With only two cult-fueled films under his belt, someone at Universal nonetheless saw the genius in letting Wright pursue this material his way. And what a way it is.

A word about Wright's treatment of O' Malley's graphic novels: Of the five "Scott Pilgrim" graphic novels, I've only read the first one. So as an adaptation goes, I can only comment on that volume, which roughly makes up the first third of the film. Not since "Sin City" have I seen comic source material so painfully and loyally reconstructed as cinema. Panel for panel, detail for detail, it's almost distracting. Wright deeply honors O'Malley's aesthetic while very much making it his own. "Scott Pilgrim vs. the World" avoids the shadow of soullessness that befalls most unflinchingly devoted adaptations ("Watchmen" comes to mind, as do the first two "Harry Potter" films). Once the story got beyond the material from the first book, the film no longer affected me as something slavishly devoted an outside source. Ordinarily for me, that is something very detectable, even when I haven't experienced any of the source material. This is yet another high achievement of this film.

"Scott Pilgrim" shows this generation that passion is still worth fighting for, and it shows the rest of us that the world of twenty-something slackers is truly not aimless, and certainly not a lost cause. In a cinematic world where junk culture has become THE culture (something the film depicts without judgment), love and humor still reign. Edgar Wright and his skilled cast and crew have delivered a crazy-fun zig-zag of a film that presents new millennial angst, pathos and the haze of life in an unforgettable slam-bang way.

More about Scott Pilgrim Versus The World