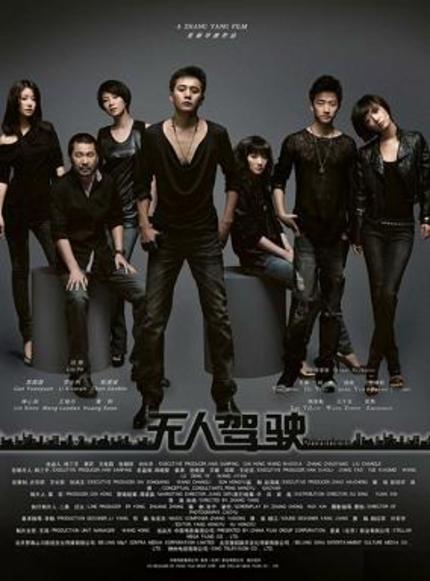 Slick, polished, compelling entertainment with impeccable production values, Zhang Yang's multi-faceted character drama Driverless would make quite the advert for the new, modern China if not for the impressive collection of problems, poor decisions and psychological issues the protagonists have to struggle with.

It centres around a single event where several people happen to cross paths, and yes, the narrative starts with that event, then cuts repeatedly backwards in time to show how everyone came to be in the same place at once. (What were these films compared to before Alejandro Iñárritu came along, anyway?)

Their problems all stem from the hectic pace of urban life on the mainland; there's the career executive (Liu Ye, City of Life and Death, The Underdog Knight) whose marriage is running on fumes and whose university sweetheart (Gao Yuanyuan, Season of Good Rain, City of Life and Death) has just turned up out of nowhere to compete for the same business deal.

There's the doting father beset by tragedy who strikes up a friendship with a woman (Ruby Lin, You Deserve to be Single, Sophie's Revenge) jilted by her fiancée. There's the deaf girl (Wang Luodan) alienated by her father's new wife, and the pretty-boy taxi driver-cum-street racer she latches on to.

The introduction is a model of economy; we get the bare minimum of information, most of which doesn't pay off until some time later. We get the first glimpse of the pivotal set piece, then it's straight in to the credits, darting around the city in stuttery, neon-lit pans and swoops.

This is significant because Driverless is definitely a very calculated, contrived film in more than one sense. It features not only a plot that relies on coincidence but a conspicuously photogenic cast and picture-perfect cinematography. This is China painted as the land of opportunity. All the principals subsist comfortably above the breadline - one character is desperate for money, but this is tied in with the story rather than the result of his living in poverty.

Still, while the glossy sheen does detract from the overall impact, Driverless is still hugely impressive, all cold blue filters, dry, bleached colour palette and snappy music-video editing. The camerawork is gorgeous, with one key scene in particular genuinely moving stuff, the kind of framing so note perfect it should see viewers instantly reaching for the rewind button.

Ultimately both the visuals and the premise may be contrived, but they do work in service of the narrative. It's obvious symbolism, but it's never thrust too far forward. It's a conscious artistic choice rather than speaking down to the audience.

When the deaf girl gets a ride in the car she's not allowed to drive, the harried executive remembers he cares about his baby son or the tragic father and jilted bride realise under different circumstances they could have been more than friends, it's popcorn melodrama to a fault but it's clear, concise and beautifully presented, with the minimum of padding.

And for all Driverless is arguably predictable, it's telling how much of the meat of the story is communicated wordlessly, in imagery, actions or expressions. All of the cast get at least one big moment to internalise, and each of them carries it off. Ruby Lin is especially wonderful, finally given the opportunity to open up after fluff like You Deserve to be Single.

Also worth mentioning is Li Xiaoran (East Wind, Rain, Out of Control) as Liu Ye's estranged wife, following her husband's infidelity with mounting despair. Cruelly underutilised in East Wind, Rain, Zhang Yang puts her broad, expressive features to good use here, her big meltdown come the climax and the flashback to when the couple first met both absolutely heartbreaking.

The obvious commercialism and the general impression Driverless is something of a precision-tooled machine above all else does hold the film back from becoming anything like true classic material, to say nothing of one or two plot developments which strain the viewer's credulity a little too far. But it's still fantastic stuff regardless, the pace and steady progression back and forth towards the final payoff enthralling from start to finish.

The lack of any English-friendly DVD at the time of writing is baffling. This is the kind of thing mainland China should be touting as the commercial face of its domestic film industry - it's product, yes, but product with heart and soul, and easily one of the best movies released so far this year. Fingers crossed Driverless is bound for a Hong Kong release at the very least.

Do you feel this content is inappropriate or infringes upon your rights? Click here to report it, or see our DMCA policy.
Yang ZhangRuby LinYe LiuXiaoran LiYuanyuan GaoDramaFamilyRomance

You can order the Chinese all-region DVD of Driverless from YesAsia here, though be aware this DVD does not come with English subtitles.