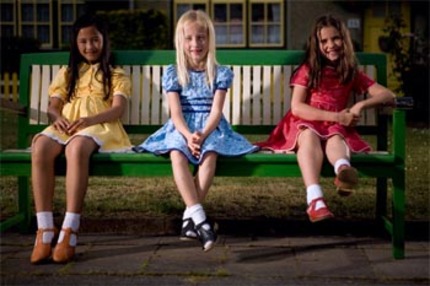 [Oh those clowns at E1! Why in gods name would you release (In Canada, anyway) a cerebral science fiction film for adults on the same day as Christopher Nolan's juggernaut? Without any marketing! Do you want your movie to fail, is this some sort of real-life version of The Producers? An echo of the old Miramax days? Either way, a wonderful film (one deserving of as many screens as Splice at the very least) as ambitious and visually elegant as Inception at a fifth of the cost!]

Nemo Nobody (a wide eyed Jared Leto) is the last mortal and he is about to die. Or is he? Much can be made of all the heady, esoteric mathematical and physics concepts (String theory, tangent universes, brain chemistry, nature of time and entropy) that the film juggles like so many brightly coloured balls. Despite being set in the far future, 2092, where mankind has achieve quasi immortality and the broadcast news has gotten louder and more blunt, the film plays both as a nostalgic reflection regret and confusion of our titular everyman, but it plays equal measure as the dreams and hopes of finding true love and happiness and several metaphysical attempts along the way. If you have ever been uncertain as to how a known big decision (or the ripple effects of unknown small ones) are going to change the trajectory of your life, then this film indulges the very human desire to follow those paths along for a bit and give them a look-see.

Mr. Nobody is almost a 'what-if' challenge to the universe and suggests that the playground of the mind is as vast as the infinite reaches of space. Are there really tangent universes moulded around each decision (or failure to make a decision) that Nemo makes or is it the mental representation of all the possible future worlds when you are five years old? There is a fairy tale quality in Mr. Nobody with its more-often-than-not candy coloured palette that seems to suggest this. Certainly as a viewer, that is the takeaway of the film. Strange that it settles on the romantic nature of 'one-true-love' and that Nemo has a 'right choice' (insofar as right = happiness) between his potential three wives and mishaps in love and lust and compassion. In a way, the film plays out in some heartbreaking and depressing avenues. The grass is always browner on the other side of the hill if you could see and trace the correct trajectory of your life. Interesting too that how adult Nemo shifts between quietly suffering saint to starry eyed love-sick puppy, to pampered and suicidal across three (or five) different lives with his three potential wives. Or as a teenager between quietly soldiering on, or outright angry rebellion. I imagine that if Mr. Nobody does one thing will it is to ponder the nature of the universe as it dishes out suffering to one lot, and life's riches to another, all as a function of random chance. Pray there is a God that pulls the strings in your favour, even though the christian angles visualized in the film are harbingers of 'oblivion' committing all those potential possibilities into one straightforward path. That would make 'god' (the film is does not delve into one faith or another, focusing on potential more than morality or subservience) a fairly reductive deity. I might say that this 'reductive-ness' is a blessing in disguise, but by the end of the film (the beginning?) Nemo more or less has his shit together and can laugh and cry along with this big old universe.
Tweet Post Submit

More about Mr Nobody