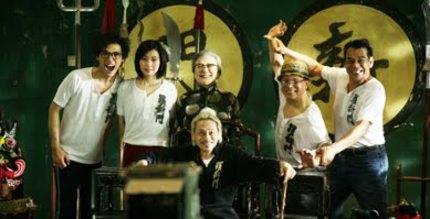 Gallants will be shown as part of the New York Asian Film Festival on 7/6 at 6:00 PM and 7/8 at 6:00 PM at the Walter Reade Theater. Information and tickets can be found on the Subway Cinema site.

Gallants is a film bred of nostalgia, and the people in front of and behind the cameras are, I think, banking on that nostalgia for old-school martial arts films and their stars to fuel viewer enjoyment of this movie. But what about the rest of us who might not be as well-versed in the films of Bruce Leung or Chen Kuen-tai? Both seem to be energetic performers and committed to kinetic action scenes in their advanced age, but I'm not convinced the screenplay by really has any use for them besides trotting them out and saying, "Hey, remember the 70's and 80's" to audiences in the know.

If you haven't read Alexander's well-reasoned and well-written review, go over there now for a synopsis of the movie. Go ahead, I'll wait.

Alexander's is a passionate and articulate defense of the film - with which I wholly disagree. Often, I ended up feeling like the lead character, Cheung - I felt like the movie had no real interest in me (the script fairly abandons and ignores him for huge chunks of the running time). Half the time I felt as though the movie was both going through the motions and trying to say something fairly unclear and muddled. None of the relationships were even remotely well-defined and the "let's save the community center" plot (in this case the teahouse) was just barely functional enough to keep the whole endeavor moving from scene to scene. The broad, silly performances throughout the bulk of the movie make the pathos of the ending feel cheap and unearned.

I will say this: the first 10 minutes or so had the feel of something alive with its mixture of slapstick, titles, and action. But as the movie went on, it felt more like a trailer for the movie I wanted to see. Ultimately, it felt like one of them most disappointing movies of the fest because the promise of its premise is never really met.

Charles is a freelance writer and game designer. Check out his blog, Monster In Your Veins.