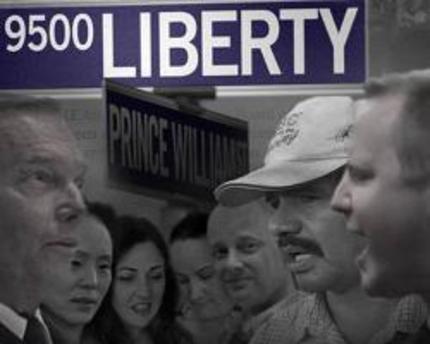 [Our thanks to Josh Hurtado for another review from the Asian Film Festival of Dallas, this time of a potentially incendiary documentary.]
In 2007, Prince William county in Virginia passed a law requiring that its police officers verify the immigration status of anyone whom they had "probable cause" to believe were in the country illegally. In 2010, Arizona passed a similar law. I wonder if they got a chance to watch this film before taking a step down that path? They may have thought twice if they had.
Perhaps it is my own naïveté, but I wouldn't have thought of Prince William county, or really any non-border state as the ground zero for an immigration debate. In the early 2000's, during the height of the economy's boom times, Prince William was experiencing a construction boom, and immigrant workers filled many of those jobs, perhaps too many. This film documents the struggle behind passing this law and follows both sides every move on the way toward a resolution.

The film began as a series of youtube videos documenting both "man on the street" styled interviews and footage of council meetings at which the measure was being debated hotly. After filming several of these clips, the documentarians, Eric Byler and Annabel Park, made a bold choice: they were going to post these clips as they were recorded so that the world could follow what was happening in Prince William county. I'm not sure I agree with the choice, but it does lend something in the way of immediacy to the feeling of the film. We feel as though we are a part of the process and Byler and Park became a big part of the debate by giving voice to both sides of the argument. This is not exactly Michael Moore styled propaganda, it tried to be a bit more even-handed, but the film certainly has its feet firmly planted on the side of the dissenters.

There are lessons to be gleaned from the film, which mostly follows the nitty-gritty machinations behind the scenes action. The Arizona legislators might want to take a look at the film to at least get an idea of what they might be up against. Prince William County is not exactly what you would call a liberal area, but some of the members of the community are able to put aside some of the rhetoric from both sides and understand the issue from a practical point of view. It is interesting to note that it wasn't exactly the moral or ethical arguments against the law that ended up making the difference, instead, the financial and civil rights implications for the county made a huge difference.

The film has a cast of very interesting and at times very colorful characters. The main proponent of the law was Greg Letiecq, a local blogger who made it his mission to show all of the damage caused by illegal immigrants in Price William County, even going so far as to suggest that many of the immigrants were Zapatista revolutionaries and murderers. Letiecq, is not a sympathetic character in the film, he comes across as all but sprouting horns, he can be charismatic, though, and it is interesting to watch him whip up hysteria in much the same fashion as a Glenn Beck or Bill O'Reilly. The other side of the argument does not have a similar driving force; instead it is made up a mix of immigrant community leaders and local residents driving hard against the law. This lack of a singular leader coupled with the rhetoric whipping residents into a paranoiac fever makes it very difficult for those opposed to the law to make headway. It takes the local police chief, Charlie Deane, my favorite character, to be the voice of reason. Deane argues that it would take a huge amount of money to implement the law and keep the city safe from civil rights abuses and lawsuits. It is a little bit like arresting Al Capone for tax evasion, it isn't what either side wants, but it gets results.

9500 Liberty won't change anyone's mind, what it may do is make some people aware is what they have to look forward to with a fight over this type of law. Many of the arguments being made in this film are being made in the current headline-grabbing fight in Arizona. It is a very engaging film about the process that makes the audience feel involved and engaged, and which may stir some to action. Not often do we get a chance to watch an issue unfold like this, usually documentaries approach a subject with hindsight, this format allows us to watch both sides' strategies evolve and resolve. It felt a little bit overlong, but I wasn't bored, just felt a bit of snipping may have helped the pace. Overall, this is worthwhile viewing, especially if you have a horse in this race.

9500 Liberty screens at the Asian Film Festival of Dallas on Wednesday, July 28th at 7:30 PM at the Angelika Dallas and is to be followed by a panel discussion with the filmmakers that should be interesting, perhaps even lively! Be there.

Do you feel this content is inappropriate or infringes upon your rights? Click here to report it, or see our DMCA policy.
Eric BylerAnnabel ParkAlanna AlmedaCharlie T. DeaneGuadencio FernandezGreg LetiecqDocumentary