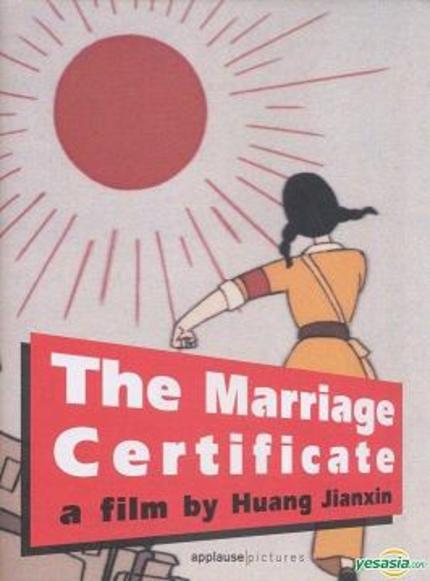 (Better late than never. Time to wrap up my series of reviews taking a look at the work of director Huang Jianxin, best known in the West - indirectly - for propaganda blockbuster The Founding of a Republic. I wanted to point out he's done quite a bit more than that, so here's some of his work that deserves more attention.)

Bureaucracy gone mad, the older generation victimising the younger, people clinging stubbornly to the past - Huang Jianxin's The Marriage Certificate has the kind of premise where if it turned up in a production from China's Fifth and Sixth generations or Taiwan's New Wave, you'd expect the PRC to get a mauling.

The plot ranges far wider than most of Huang's films - it still focuses on something very intimate (a relationship in danger of falling apart) but it draws a direct line from past events to a present gone wrong, where previously the director didn't go out of his way to reference history. Yet in Huang's hands this approach never becomes self-indulgent, never strays into self-pity and never once suggests either China or her people past and present are solely to blame.

The title is where the problems get started. Xie Yuting and Gu Ming are a moderately well-off married couple living in an unnamed northern city, she (Yuting) an engineer, he (Ming) a psychiatrist, with a young daughter Xiaowen who's just turned thirteen.

One day Yuting's workplace runs an offer where free blankets are handed out to any married couple who've been together more than eighteen years. Yuting doesn't want to miss out - but in order to claim the bonus she has to submit her marriage certificate as proof, at which point she suddenly realises she has no idea where it is.

Now if the couple don't have a marriage certificate, technically they're breaking the law in cohabiting, so Yuting is desperate to track it down but her husband sees this almost as an insult - why do they need a piece of paper to validate their relationship? One minor catastrophe follows after another; they can't get another certificate without a divorce, but they can't get a divorce without a marriage certificate, and so on and so on until the strain is taking its toll on their daughter as much as on each of them.

Yet the film is neither a straightforward comedy of errors (though it is frequently very funny) nor simply a case of 'oh, China' (however many awkward questions it poses). The marriage certificate represents more than just an official rubber-stamp. It's everything that brought husband and wife together - personal growth and the march of history.

This informs both the couple's character arcs (surely we still love each other after everything we've gone through?), their daughter's (please don't let my parents split up after all this time) and the contrast between these two viewpoints (it's just a sheet of paper, right?).

Unlike their later collaboration on Gimme Kudos, Fan Yi and Huang Xi's script crams enough subtext in it leaves The Marriage Certificate a very shaky piece of work, and some haphazard presentation only compounds this. After the straightforward aesthetics of Xian's Finest a year earlier the director visibly overextends himself in an attempt to mix things up. Various subplots are shot and edited so differently they seem to belong in separate films, and cheaply produced animated sequences don't help matters either.

Nonetheless, Huang forges ahead so briskly it's very easy to overlook his artistic shortcomings. Since The Black Cannon Incident his films have always been melodramatic yet unmistakeably matter-of-fact with it, more so than many neo-realist or documentary features, and The Marriage Certificate exemplifies this approach. Underneath the jittery direction and the bursts of low humour is a beautifully thought-out examination of the implications of bureaucracy run amok which questions rather than lectures, never favours one party over another and never claims either is more culpable.

The cast, helpfully, are tremendous. Feng Gong and Lu Liping as husband and wife are consistently excellent but Li Xiaoming steals most of her scenes as their daughter and her role in wrapping up the plot almost demands a film to itself. Like the director, all three rarely if ever miss a beat, their chemistry so effortless the viewer can forgive any number of technical hiccups.

It is worth noting, also, that for all the problems with pacing and structure the ending is fantastically judged. In keeping with the objective viewpoint the director favours it is ultimately pretty ambiguous, yet this is unmistakeably in service of the narrative as a whole rather than any attempt to wrap things up in a hurry.

One of the high points of Huang's career thus far, then, and both a hugely entertaining character drama and a subtly provoking social satire that never stoops to the obvious means of handling its basic premise. Largely overlooked nine years on, for all its obvious flaws The Marriage Certificate comes very highly recommended.