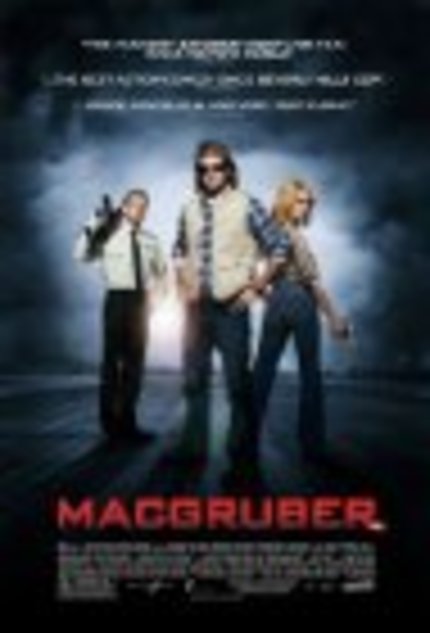 Although the "MacGruber" movie has anything and more that just about anyone could reasonably expect from a feature film based upon the notorious "Saturday Night Live" sketch, it does have one major thing going against it - it's a "MacGruber" movie. It almost doesn't matter how funny it may actually be (and it really does have it's moments), I suspect that most of the world is not exactly in the market for yet another SNL movie. Even the studio seems to have no faith, as the screening I attended was held late the night before the film opened. Thankfully the movie is short, so I can get some sleep tonight, and even have a little time to write this. Hence, this will also be short.

Will Forte plays a highly respected former military covert-ops man-of-action who is recruited back into the international espionage fray for personal reasons. The why of it all completely defies logic, since MacGruber is never anything other than inept at what he does. But, if you're looking for logic, or even sympathetic characters in relatable situations, "MacGruber" is not the movie for you. If you're in the market for a hard R-rated spoof of action movies, rife with dirty jokes, dumb gags and more tepid eighties songs than one movie should be legally allowed to have, then you've come to the right place. Of course, in this day and age when even most legitimate action movies tend to be tongue in cheek, one has to wonder how necessary this film really is. But, it's "MacGruber" people - necessary has nothing to do with it. It's about as necessary or logical as this review is eloquent. (Hey, I'm on a tight deadline here!) Just know this - Val Kilmer plays the villain, Ryan Phillippe plays the straight man, and Kristen Wigg plays the girl. Of the three, only Wigg seems to be struggling with what she should be doing in this movie (which is ironic, since she's the only veteran of the TV version of "MacGruber" in that group). It's some sort of "MacGuyver" parody, but not really. A lot of people die very violently, and it's all for laughs. A throat-ripping good time!!!

"MacGruber", I do believe, has the benefit of being the most R-rated SNL movie yet. Forte and company aren't so much out to emulate "Wayne's World" as they are looking to get in league with Sasha Baron Cohen. The film never drags, and you may hate yourself for laughing at most it, but "MacGruber" is certainly the film that they set out to make - no more, and no less. This is not to be confused with any type of sophisticated satire of the action genre. I suppose one could stretch with the notion that this is a commentary on how contemporary audiences find watching people getting shot to be fun, an so then why shouldn't they also find it funny? Nice try, but no. This is much simpler than that. Clearly this is a quickly assembled gag-fest of things that Forte and company found to be funny wrapped around the most deliberately cliché action move plot ever. That's it. It does at times ignite the screen with laughter, but time will tell if it's really a bomb or not.