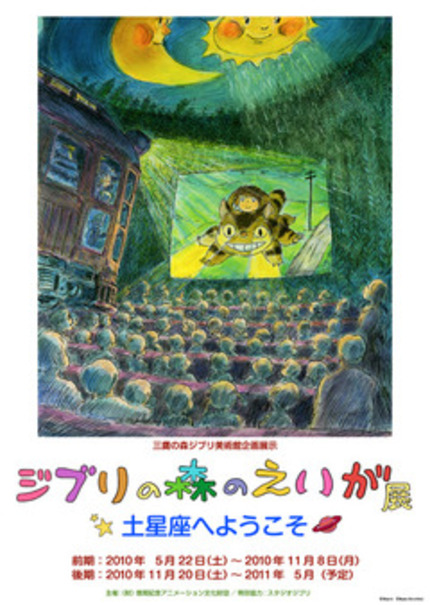 Next month Studio Ghibli will be opening a new exhibition called Ghibli no Mori no Eiga - Yokoso Dosei-Za he at . Roughly translated as The Movies of Ghibli Forest - Welcome to the Saturn Theater, their special will zoom in on all the shorts the famed animation studio has produced for their own little museum in Mitaka, one of 's more outer cities. It is the last part of that sentence should not be missed, as the only way to experience these little pieces of animation is really to visit the museum's cinema. They are true exclusives: no wide cinematic release and no DVD or Blu-ray. Nada, niente, nothing.

Because of that "ten" (Japanese for exhibition), this week's ToM is zooming on in our favorite shorts. Before heading on to the usual ToM Top 5 though, an additional tip to our readers. Those real fond of animation might want to plan a new trip to . Two new shorts will be released later this year; one rumored to be by the hands of maestro Miyazaki and the other one rumored to be by the studio's newbie animators at Nishi Ghibli (= West Ghibli, the studio's new department / school at Toyota HQ).

1. "Hoshi wo Katta Hi", a.k.a. "The Day I Harvested a Star"
Hoshi wo Katta Hi, also known as The Day I Harvested a Star, is a lovely animation and... it comes with a superb soundtrack by Hisaishi Joe. As a personal favorite, this work started screening in January of 2006. Direction wasn't done by Miyazaki Hayao, but by Ai Kagawa, who also was key animator on Nausicaa of the Valley of the Wind, Only Yesterday, My Neighbors the Yamadas, Howl's Moving Castle and was main animation director under for "Porco Rosso". When watching Hoshi wo Katta Hi you'll probably be familiar with some of the things that appear in it. That is because it shows the visionary world according to artist Naohisa Inoue's original work Iblard. Inoue is the artist who painted the backgrounds in the fantasy scenes of Kondou Yoshifumi's Mimi wo Sumaseba (Whisper of the Heart)

2. "Yadosagashi", a.k.a. "House Hunting"
This Ghibli short is about a girl who goes on a trip to look for a new house. Where it receives two thumbs up is for its (for Ghibli) experimental execution. Rich Japanese expressions such as "zah" and "zo zo zo" were used to visualize the sounds and atmosphere by animating them on screen as well. Really funny and witty. Like once noted about this piece "All the sound effects and incidental "music" were performed vocally by TV personality Tamori and pianist, singer and composer Akiko Yano. We can't do this sort of thing in a typical film for the cinema. Filmmaking these days is so restricted by conventions and rules. The sound effects, incidental music and dialogue are all done separately, and mixed and digitally processed later... For this reason, I wanted to give the work a live feel by requesting the two performers (Tamori and Yano) to produce oral sound effects, for example, the "zah" sound... recording the sounds in one take. I was really surprised by the talent shown by the two performers."

Luckily, Studio Ghibli isn't particularly your sequel plant. Indeed, Whisper of the Heart and The Cat Returns are very loosely connected. And then there's the closest thing you'll ever come to a Ghibli sequel: Mei to Konekobasu. But that truly is all of it.

Mei to Konekobasu's original story, screenplay and direction were done by Miyazaki Hayao. Its soundtrack came from the musical mastermind of Hisaishi Joe who composed two new pieces for this short. Furthermore, animation direction was handled by Maikiko Futaki, Sachiko Sugino and Hiromasa Yonebayashi. The last one of that trio deserves a special mention as Yonebayashi is to make his directing debut with Ghibli's latest full length feature Karigurashi no Arrietty which is to be released this summer.

Storywise this short is very simple, but the animation is breathtaking. What particularly comes to mind is one of the first scenes during which Mei becomes friends with the baby cat bus by offering it a caramel. The animation of the little baby catbus going beserk while being trapped in Mei's room and enjoying Mei's treat is definitely a highlight. Later on the two go off to the forest at night where spooky ghosts gather and many mysterious creatures appear in the world where Totoro and the catbus live. Worth noting is that Hayao Miyazaki did one of the voices during that scene (guess who? > check the picture).

Some of the trials Studio Ghibli had during the production of their museum shorts made it possible for them to make Ponyo without CG. Koro no Daisanpo brought it the picture book style backgrounds (the warm and nostalgic style painted by Yoshida Noboru was first accepted in that movie). Yadosagashi gave it the typical depiction of trees, grasses and winds which were drawn using Sakuga. Hoshi wo Katta Hi gave them its three-dimensional depiction without using CG mapping. And what about Mizugumo Monmon? That short gave Ponyo something unmissable: its detailed depiction of water.

The story basically is a love adventure of a water spider who drags a bubble of air underwater to make a nest and then meets a water spider. It beautifully portrays life in the pond in which they live such as enormous crawfish, fish and small water flea and these lovely images are backed up with a nice happy, folkloristic sounding soundtrack using lots of violins.

The studio used 30,000 cels to make Mizugumo Monmon. The amount of cels is of such a high quantity, because it took a lot of cels to depict bubbles and the rippling of water. It is something that was also reflected in the costs of this production. Making short films is definitely not commercial, but that's where comes in handy, as "There we don't need to worry about the commercial aspect of a film. You can't expect to have a more enjoyable job than that".

Released this January, this short is Studio Ghibli's latest addition to their collection of museum shorts. Its scenario was made by , but direction and e-konte (storyboarding) were done by Yamashita Akihiko, added with art direction by Tanaka Naoya and music by Watanobe Manto. Based on a Japanese traditional tale, this short has a simple, but very enjoying story about some mice that practice the art of Sumo. Director Yamashita Akihiko made it with the hope of everyone tasting the enjoyment of animation without considering any form of logic. During production of his directing debut he had a tough time when animating a group of mice. They rush up to the dish the old man and his wife made, but pointed him out that "You must change your understanding about these mice. You should think them as decent samurai." The result is a humorous and cheerful short.

All in all, this ToM wasn't much of an in-depth analysis of the Ghibli shorts. That's not what this is about, as it would just spoil the fun. These little great pieces of animation are more about the experience, creativity, mood and atmosphere, so forget about mind blowing storylines and engaging character development. All young and old will certainly enjoy sitting front row in 's Saturn Theater. So which shorts have you seen & which one did you enjoy most? Start some discussion and drop us your comment below!