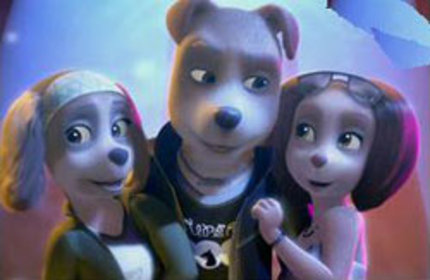 Anyone remember Roadside Romeo, the 2008 Bollywood animated musical from Disney featuring anthropomorphic animals and the typical boy-meets-girl-and-falls-in-love story?  Well, it's deja-vu all over again. From Dharma Productions and Prana studios comes Koochie Koochie Hota Hai, an upcoming animated version to the hit romantic comedy Kuch Kuch Hota Hai that stars the popular on-screen pair of Shahrukh Khan and Kajol, along with Rani Mukherji, Sanjay Dutt, Riteish Deshmukh, Anupam Kher, Uday Chopra and Simi Garewal in supporting roles.  After 12 years since Kuch Kuch Hota Hai was released, the original cast will return to provide their voices but the difference this time around is that their made up of various animals.

This is the story of Rahul (Shah Rukh Khan) and Anjali (Kajol) who studied in St. Xavier's College. Anjali being a tomboy got along very well with Rahul and the other boys - Rahul being her best friend. Being so close to each other, Rahul and Anjali would probably fallen in love, however the reasons why this did not happen was because they were having a very good time being best buddies and then Tina (Rani Mukherji) the Principal's daughter came into their lives. For Anjali, Tina was a third member of their gang, however, for Rahul - his life was never the same - he fell in love with her.

Anjali was finally beginning to fall in love with Rahul, and when she sums up the courage to tell Rahul about her feelings, Rahul informed Anjali in his usual friendly manner, that he was falling in love with Tina, totally oblivious of his best friends feelings for him. Broken hearted Anjali decides to leave the college mid-term making up an excuse. It is at this point that Tina having always suspected Anjali's true feelings for Rahul realizes why she was actually leaving.

The film revolves around the story being narrated to Little Anjali, Rahul and Tina's eight year old daughter through the letters her mother has left for her when she died due to complications at child birth. Tina tells her daughter to fulfill her dream to bring back her father and Anjali together - best friends who would have eventually fallen in love and who have not seen each other for the past nine years.

Do you feel this content is inappropriate or infringes upon your rights? Click here to report it, or see our DMCA policy.
Tarun MansukhaniKaran JoharShah Rukh KhanKajolRani MukerjiSanjay DuttAnimationFamily