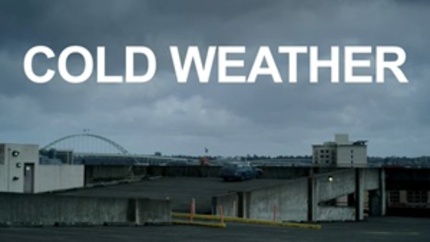 I would not at all blame writer-director Aaron Katz if he has come to resent the whole mumblecore tag place on him and his work.  A very specific approach to low budget film making, the mumblecore aesthetic - much like Lars Von Trier's Dogme 95 movement - was widely seized upon by aspiring film makers who saw it as a way of legitimizing their work.  Can't compete with the big boys in terms of budget? No problem, just call yourself mumblecore.  Except there was a problem ... much like the Dogme 95 aesthetic, mumblecore was latched on to by an awful lot of people who confused 'lo-fi' with 'boring' and in the wrong hands both movements are simply tedious in the extreme.  In the right hands, however, the aesthetic works beautifully and Katz's are clearly the right hands.

For his latest feature - the freshly selected for SXSW Cold Weather - Katz goes someplace a little bit different, tackling the crime thriller.  Here's how the festival describes it:

A former forensic science major and avid reader of detective fiction, who, after making a mess of his life in Chicago, returns to his hometown of Portland, Oregon. There, he, his sister Gail, and new friend Carlos become embroiled in something unexpected.

The first trailer for this one has just arrived.  Check it out below!
Sign-In to Vote
Tweet 0 Submit

Very much looking forward to this one at SXSW. Katz is extremely talented and having the M-word hung around his neck like an albatross is doing him no favours at all.

Hoping he can leave that all behind with his latest film.

Beautiful...this is the film I'm most looking forward to at SXSW...looks amazing!